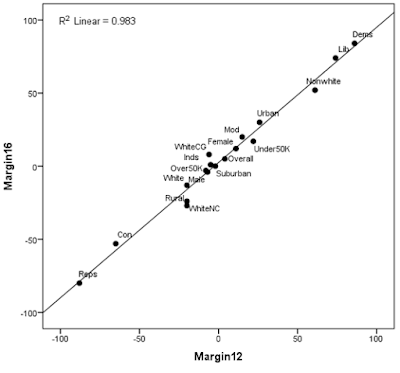 For all its primary-election novelty, I think the 2016 general-election campaign will be quite traditional; maybe even dull:

"There is a correlation of .99 — an almost perfect relationship — between Obama’s margin over Mitt Romney in the 2012 exit poll and Clinton’s margin over Trump in the 2016 CNN/ORC poll across these voter groups. These findings strongly support the belief that group voting patterns in 2016 are likely to closely resemble group voting patterns in 2012."