I'll be in Albuquerque and Las Vegas until May 18th. See you later with some fun stories!
Posted by Marc at 1:01 PM No comments:

No Condemnations For The Excess

I submitted this to Andrew Sullivan's blog, but it didn't get printed (that's why we all have blogs, right?):

The revelation regarding Bill Bennett's excesses, and the failure of conservatives to roundly condemn the sin (if not the sinner), are just another sign that conservatives are sliding comfortably into more and more seats of entitlement, from which they will exercise power without conscience or limit. The excesses for which conservatives once pillioried liberals now bear a right-wing label. Deficit spending is now a conservative privilege, as are foreign adventures. Perhaps it's just part of the cycle of American politics, whereby the Democrats and Republicans covet the other's position, and completely switch positions over time (have you noticed the Red-Blue states of the 2000 election are nearly the mirror image of the 1900 election?) In any event, conservative ascendancy is looking like it's going to be pretty toxic for everyone who doesn't fit into a privileged elite of one stripe or another.

Regarding Bennett, much of the damage he's done is within his own family. Excess wreaths itself in lies, which start in response to very basic questions: "I miss you, everyone's been looking for you, where have you been?"; "where has our money gone?", etc. The damage continues with denials of a problem, assertions that no material harm has been done to the family, and bogus promises to stop gambling, with the entire family acting as accomplices. His excess, evasions, and outright lies form a poor basis from which to expound conservative virtues of sobriety, reserve, and honesty, yet he still has many defenders on the right! Family values indeed!

Kathleen O'Reilley liked this. It's not hard to see why, either.
Posted by Marc at 5:57 PM No comments:

We Finished "Grease" This Weekend

We finished "Grease" this weekend. Fun was had by all. It was a strange experience to see the cast become more harmonious with time, rather than driven apart by various pressures (apparently several cast members had pre-existing dislikes that were finally reconciled during the show). It was hard at first to do Eugene the Nerd, since the experience took me back to unresolved nerd issues from junior high and high school, but since I'm so much older now, the issues have lost their punch, and I was able to relax and have fun.

On the last Saturday, we had a strange audience that seemed overly reserved, unusual for a Saturday, but I was surprised by a wave of sympathy that rippled through the audience when Eugene gets pushed around at the dance just before the contest, when Miss Lynch, who officiates, says all couples should be boy-girl, and Roger says "Too bad, Eugene!" I had never felt that wave of sympathy before that last Saturday. There was a point in the show every night after the contest, when I ad libbed a line that was not in the script, to comic effect. The moment came when awards are given after the Dance Contest at the High School Hop. When Danny and Cha-Cha are presented with a trophy prepared by "Mrs. Schneider's art class", I shouted a line, sometimes, "Home Room!", or "4th Period!", or something to that effect. My ad lib line that night was "And Special Ed!" After the show, I learned that the audience had a significant number of kids with Down's Syndrome, which simultaneously explains the audience's reserve, and their sympathy for the underdog. Strange moments come when doing theater!

In my show biography, I told the story of Bob Chaney, a good friend from junior high school, high school, and early college years, but a consummate nerd - the best I ever met. Here is the story I related, in a caption below my picture, which was posted along with the rest of the cast's pictures in the lobby of the Varsity Theater in Davis:

I would like to dedicate my performance as Eugene the Nerd to my old junior high/college friend, Bob Chaney, the Prince of Nerds. Bob had all the requisite Nerd gear - checked shirt with pocket protector, thick glasses with tape on the temple, slumped shoulders. But Bob had the attitude down cold - a real inspiration, and what I try to capture with Eugene.

When Bob entered college, his grades fell sharply. Bob wouldn't write essays the way the English teachers wanted - his dream was to come up with the world's best manual for automobile repair, and so he would write - manuals. Confronted with essay demands in History class, he tried a "Comprehensive History of Automobile Repair Manuals since World War II". Bob already knew something the rest of us would learn only with the dot-com boom: there are a lot of really badly-written manuals in the world.

In our freshman year in college (New Mexico Tech - Socorro, NM - 1974), Bob had a dorm room at the east end of West Hall, which was unfortunate, because that was where the Hoovers (guess why they are called that), under the leadership of the infamous Wedge, held drunken air guitar parties all weekend long. Wedge and the Hoovers started calling Bob "Plebney", and began harassing him. Poor Bob slept in his closet, so as to avoid partiers spying through his window. One Saturday night, 'One Drunk Chick' pounded on his door shouting "I want to sleep with Plebney!" Bob opened the door, jabbed her with a pencil, and slammed the door. The Hoovers were angry, and wanting revenge, when someone realized that they themselves were ultimately at fault. Who better than Bob, they reasoned, really represented the Hoover spirit? And so Bob became, after a fashion - the Hoover's mascot! And all lived happily ever after!

The moral of this story is: Each of us has the Hoover spirit deep inside, we just express it in different ways.

In any event, here are some pictures from DMTC's recent version of "Grease" (all photos by James Stark). 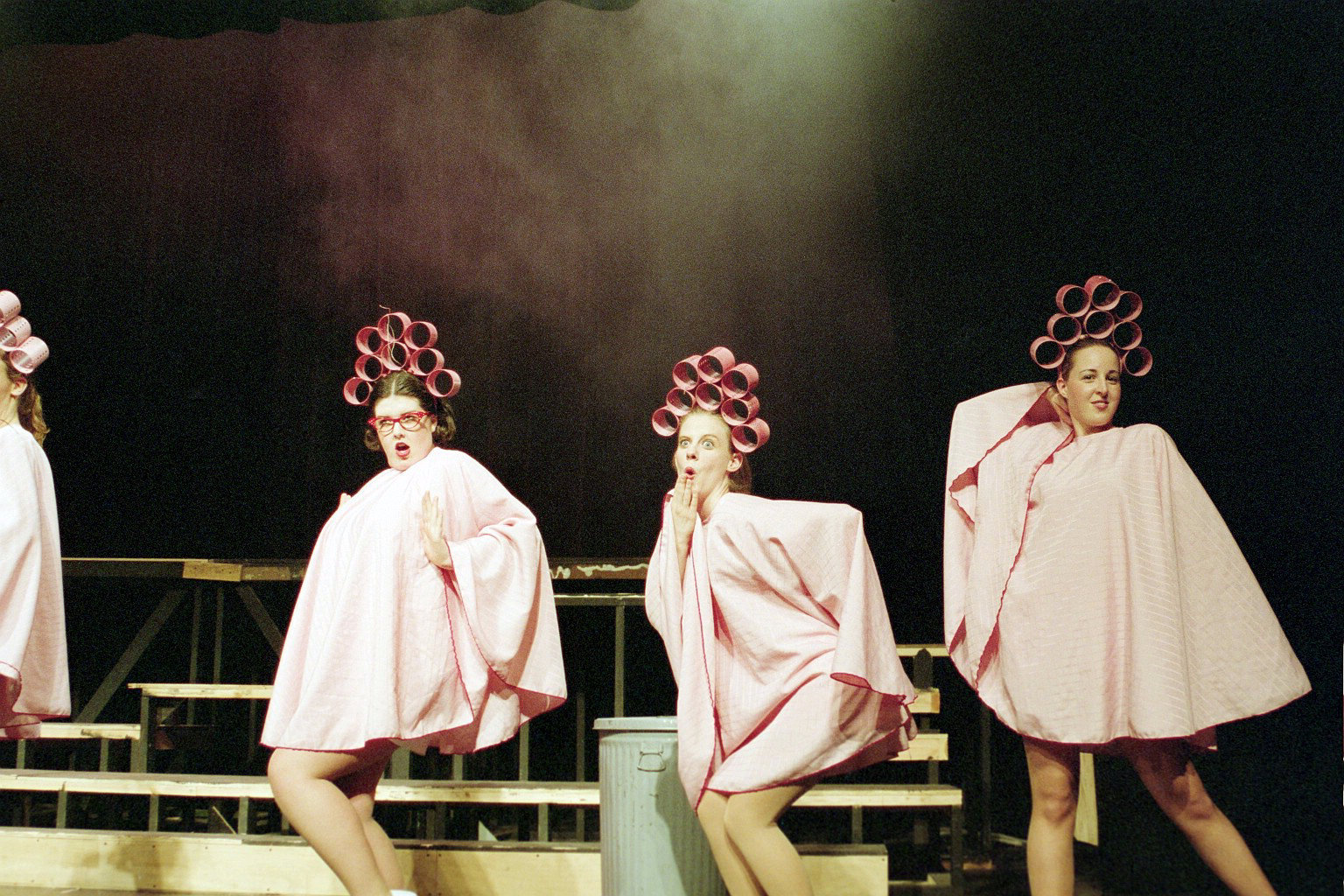 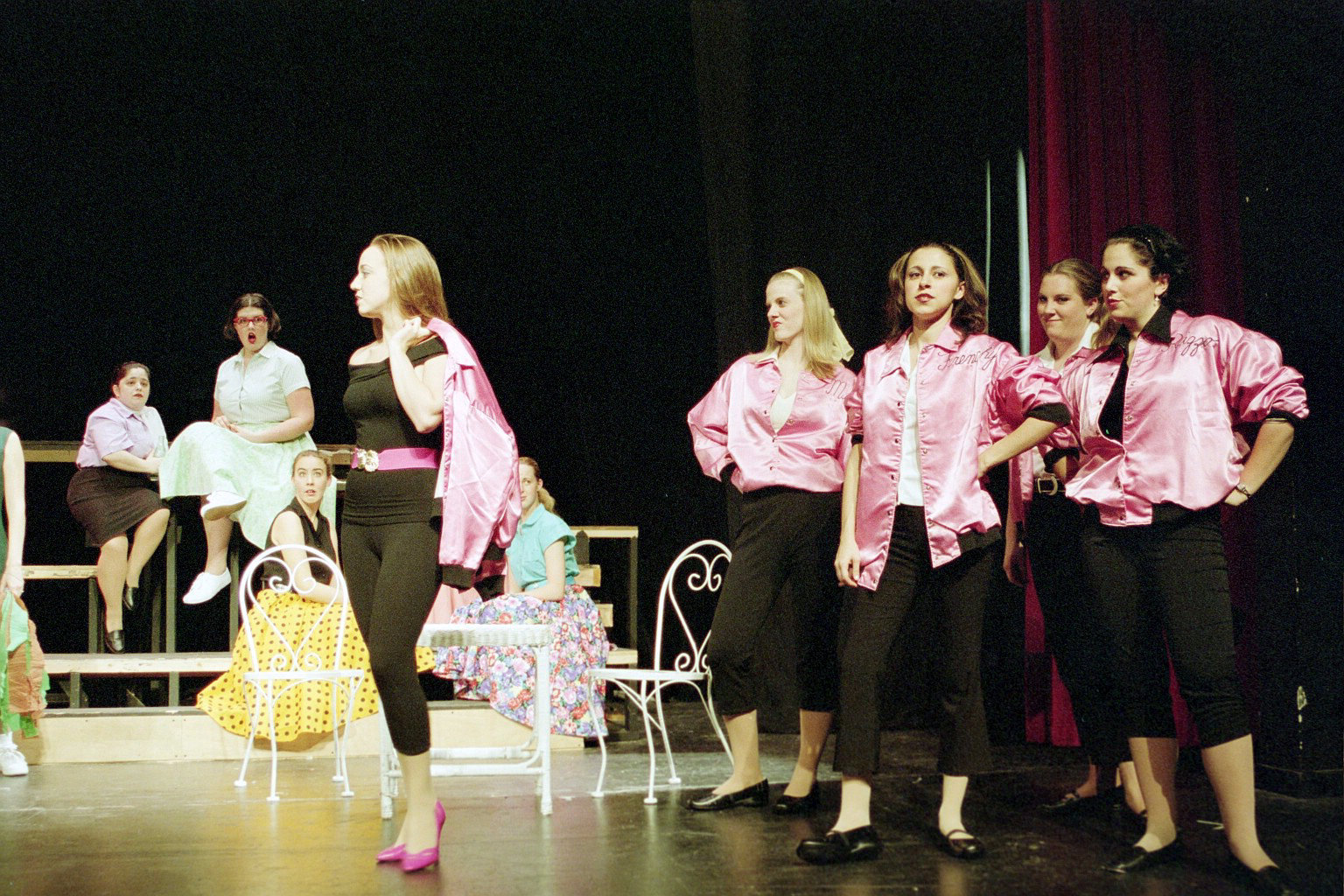 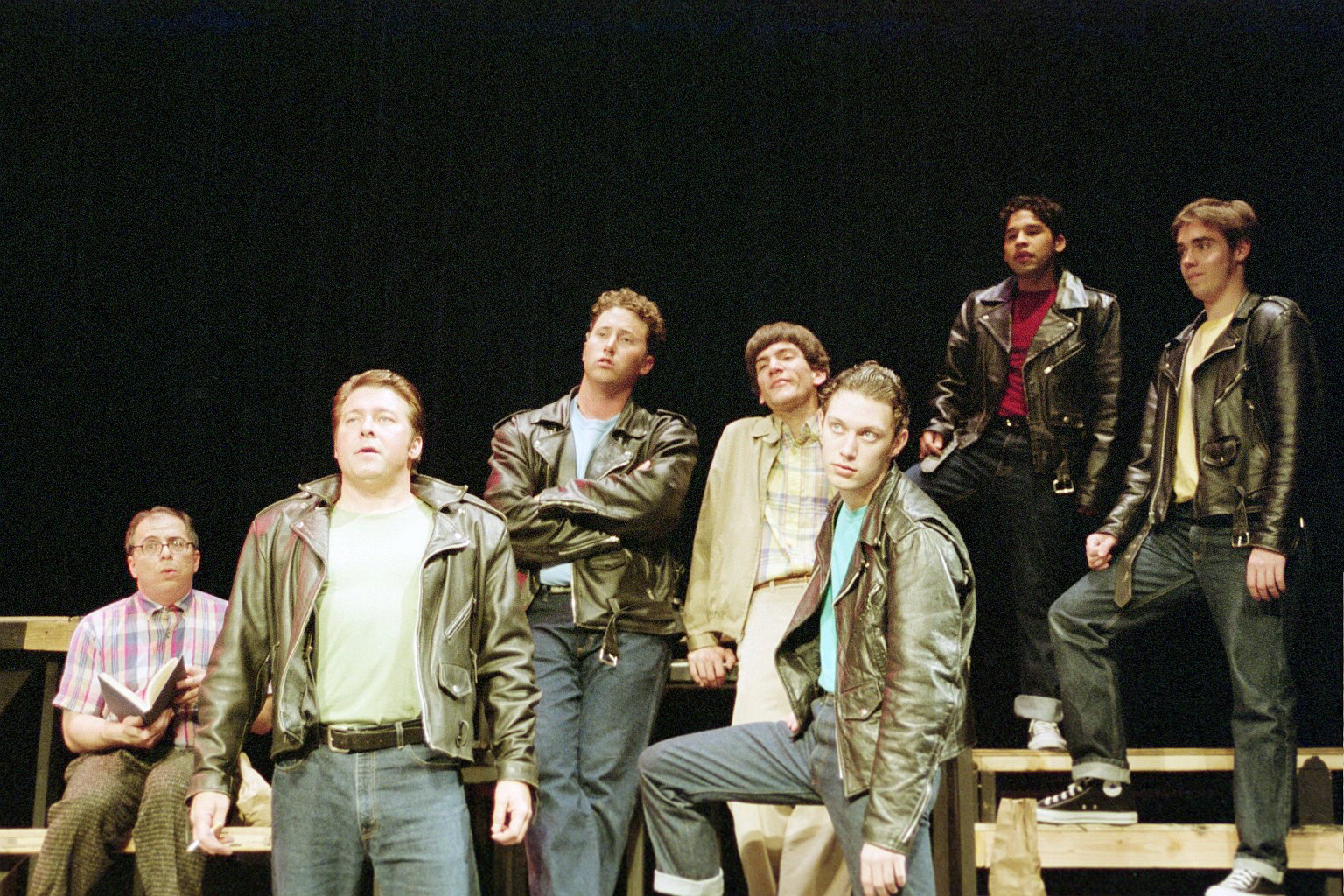 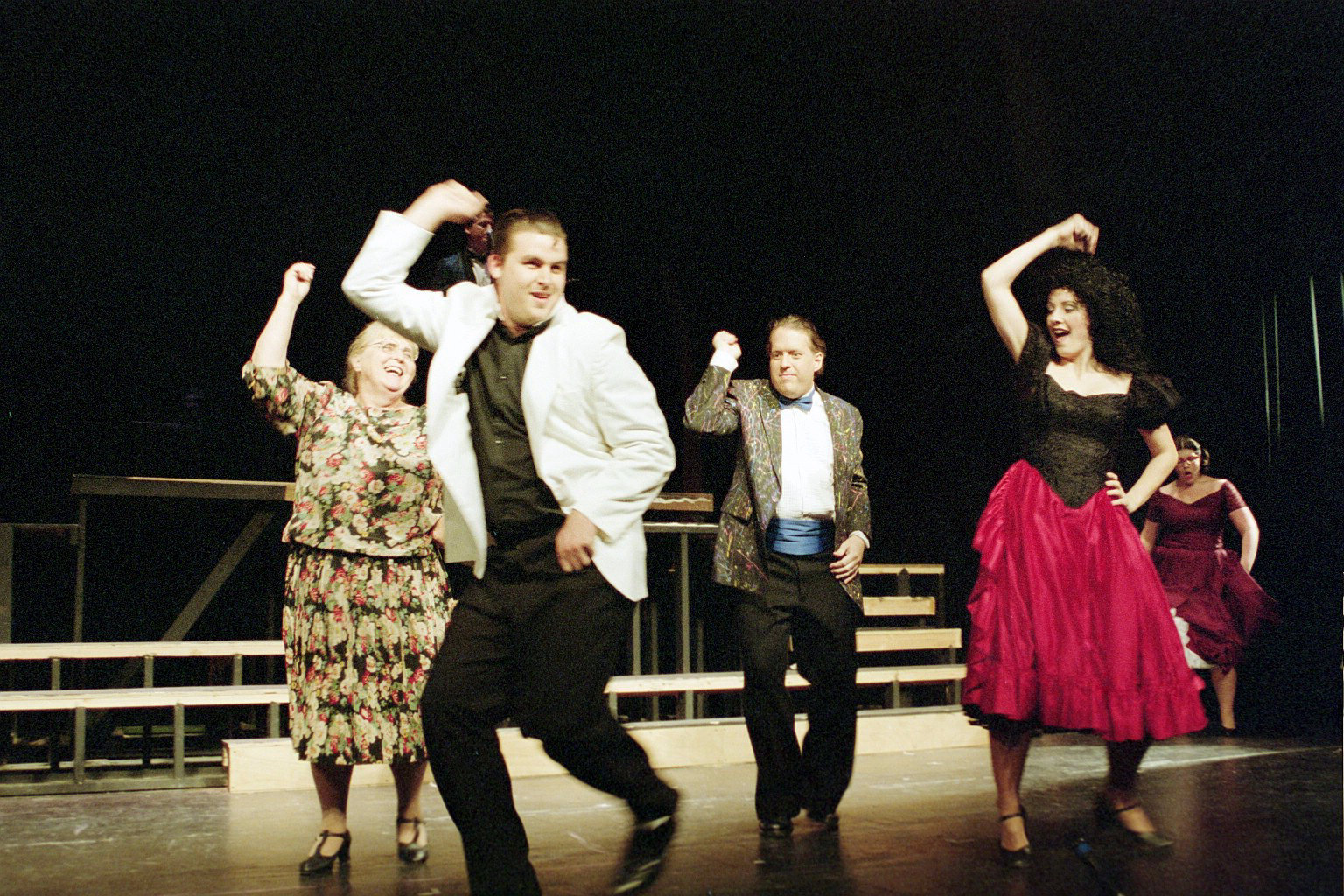 I have to say that it gives me a sense of pleasure to see William Bennett so discomfited by the revelation of how serious his gambling problem is. He embraces the libertarian argument that his own gambling causes no one else any problems, and thus he should suffer no blame, yet advocates jail for those who embrace the identical argument when they smoke marijuana. It's a form of hypocrisy, and hardly virtuous at all. It's his family, however, who will suffer the most as he descends the slippery slope into lies and deceit that serious addiction inevitably causes.....
Posted by Marc at 11:18 PM No comments: