When Will Republicans Get Serious About National Security?


And Republicans simply can't be bothered to take any of this seriously. They blather about Obama being weak, but when you ask them for their plans you just get nonsense. They demand "leadership"; they bask in cheap applause lines about a bigger military; they all chime in like puppets to agree on a no-fly zone; they suggest we stop worrying about civilian casualties; they propose more arms for the Kurds; they want to team up with Sunni tribal leaders without saying how they'd accomplish it; and they vaguely imply that we should bomb ISIS differently....or more....or with greater determination....or something.

None of this is remotely serious. A bigger military wouldn't affect ISIS. A no-fly zone wouldn't affect ISIS. Killing civilians would actively help ISIS. The Kurds aren't going to fight ISIS in Sunni territory. Sunni leaders aren't going to be reliable allies until they trust Baghdad to treat them equitably. And sure, we could bomb more, but there's not much point until we have the ground troops to back it up. But Republicans have been unanimously opposed to American troops all along, and Iraqi ground troops flatly aren't yet willing or able to do the job.

I hardly want to be in the position of pretending that Obama's ISIS strategy has been golden. But Republicans make him look like Alexander the Great.

Reassert Control Over Your Unreasoning Panic About Syrian Refugees 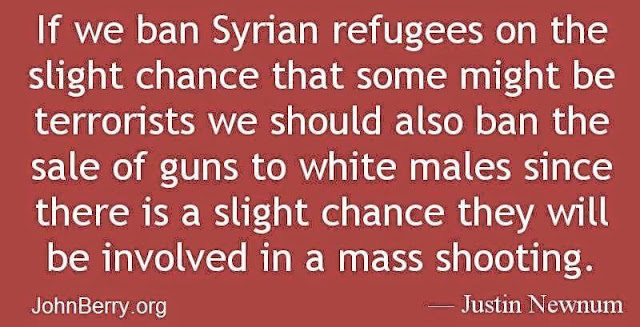 Keep your panic under control!


Despite the rumors that tricked more than half the state governors in the USA into enacting racist anti-Syrian policies, there is no evidence that the Paris attackers came from outside the EU.

One attacker had a seemingly fake Syrian passport on his body, which is consistent with the idea that Daesh want to provoke racist retaliation against Muslims around the world, to convince moderate Muslims that there can be no peaceful co-existence with secular Western states. The tactic has been effective: the terrorists used it to recruit the majority of US state governors to support Daesh's goals.


Unfortunately, women named Isis, no matter what their personal attributes, now have to put up with associations with this group - despite having had the name much longer, and doing many good things in that name.

Like Obama and others, I also don't like to use the term 'radical Muslim' or its variants. Conservatives deride others for not using the term, saying that liberals lack the courage to properly label the group, but the religious label gives the group credibility and insults the faith of ordinary Muslims. If you use the term 'radical Muslim', the terrorists win. The term 'Daesh' is better.

This is exactly why we MUST avoid using the term 'radical Islamist'. Marco Rubio is dumber than a box of rocks, as proven by this exchange:


Rubio argues that to the extent we're trying to avoid alienating the bulk of the world's 1.3 billion Muslims, this larger group is comparable to Nazi party members who simply hadn't committed atrocities with their own hands. As this crowd is fond of saying, words have meaning and they have consequences. And the clear import of Rubio's Nazi analogy is that we are in fact at war with Islam itself but that there are many Muslims who haven't themselves committed acts of terrorism. Read the actual words. That's the only reasonable interpretation of the analogy as he states it.

"I Will Possess Your Heart" - Death Cab For Cutie

I don't listen to much Indie Pop, but I heard this on the radio last tonight, and really like it. It was one of those magical moments when you hear a tune on the radio for the first time ever, and realize immediately it's a great pop tune!

Working On My 'NM Childhood' Book

I've been continuing to update my account of growing up in Corrales, New Mexico. I haven't been able to find some materials, but I did stumble across a forgotten family portrait from one of Uncle Mark and Aunt Millie's visits, sitting in front of our new fireplace, apparently mid-year 1971, just before our ill-advised move to San Diego: 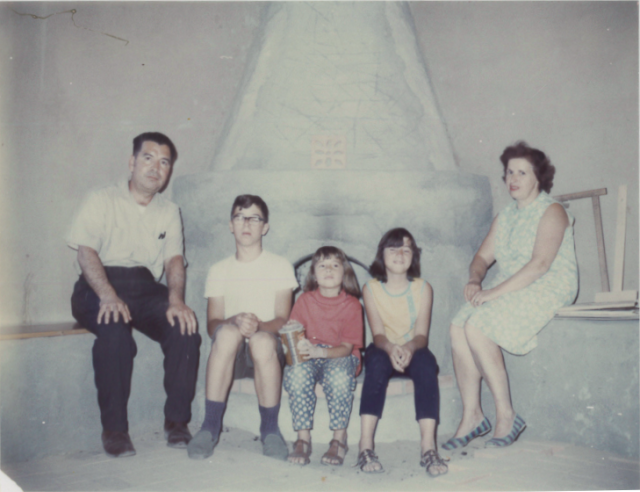 The Really Resilient Ridge has reasserted itself. Forecast storm next week will come in so weak that all anyone will notice is the wind.
Posted by Marc at 12:49 PM No comments:

Our Bad Bitch is Badder Than Your Baddest! 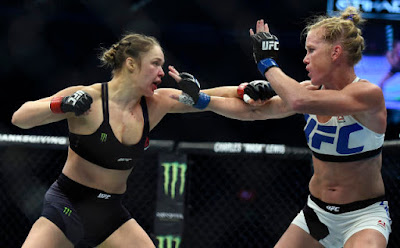 Carried away with hometown pride. Our bad bitch is badder than your baddest!

After ring announcer Bruce Buffer announced Holm as the new champion, Holm walked over to Rousey, embraced her and whispered in her ear: “I went over to Ronda and said ‘Thank you so much. I don’t have this opportunity without you. You’re a great champion and I appreciate you.'”

Rousey spent the night in a Melbourne hospital. There are conflicting reports about the extent of Rousey’s injuries.

“At the end of the the day, I still want my opponents to be healthy and good,” Holm said. “It’s a sport. This is not something I do with any bit of an evil heart. I just wanted to show my respect for her.”

The Right is full of itself right now, blaming Obama for terrorist violence that never was in his power to control. The only way to exert stronger control in the chaotic void of NE Syria is 'boots on the ground.' Let's scope out what a U.S. military intervention might mean.

The current array of forces greatly benefits Israel. A front-line state, Syria, is so gravely weakened by the fight with Daesh (aka ISIS) that it currently poses little threat. Doing a U-turn on current policy and inserting U.S. troops would at first greatly benefit the Assad regime, and thus ally us with Russia, Iran, and Hezbollah, immediately posing a greater threat to Israel.

Obama has been trying containment, because that strategy minimizes risk. The violence in Paris doesn't change that calculus at all. Obama had victories last week. 'Jihadi John' was killed in Syria and Abu Nabil was killed in Libya, blunting ISIS expansion there. Terrorist operations in France, if anything, demonstrate the desperation of ISIS to change the political dynamic. Rededicating ourselves to smarter, better containment is the best approach.

(My main complaint about current containment was selling out the Kurds in August to get access to Turkish military bases. The Kurds are 'boots on the ground.' It's not worth selling them out.) 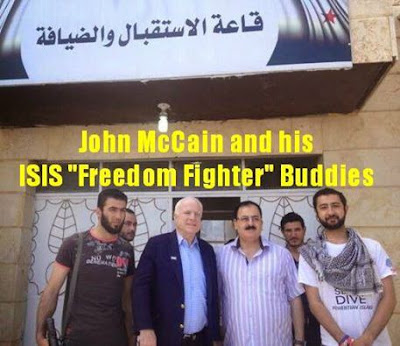 It's not hard to find examples of U.S. Middle East idiocy. John McCain has been so eager to intervene in the Syrian situation, out of ignorance, he appeared with ISIS representatives. Trusting warmongers with greater influence in the Middle East is a guaranteed losing situation, because they are too ignorant to win.