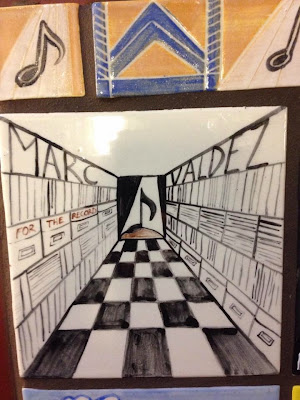 Wow, I'm so observant! I hadn't noticed this before. A patron pointed it out. Thank you, Jen!

Starting in 2006, with a major addition in 2014, DMTC theater maintains two walls of tiles. In general, children attend a workshop, where their own designs, usually celebrating family or the theater, are fired into clay. Unbeknownst to me, Jen N. created extra tiles for certain theater notables. The one she made for me celebrates my archivist role in the theater, and months ago was placed on top of the south wall, in the corner; a most prominent place, where no one could possibly miss it, except for a certain nearsighted archivist.
Posted by Marc at 12:52 PM No comments:

Standing in the kitchen, it's the subtle sounds that are important. Like, after hours of fruitless labor, hearing the bathroom sink clog suddenly give way.

Completely Knocked Over By The Fabulous "Clouds of Sils Maria"!

I got tired of doing plumbing so decided to go see a movie. The movie I wanted to see at the Tower was unavailable ("Salt of the Earth"), so ended up seeing "Clouds of Sils Maria". It is advertised as a character study of three actresses, one of whom is grappling with age, but I interpret it quite differently, as history's most-subtle-ever horror film. If you like acting, you'll like this! Kudos to the fabulous Kristen Stewart!

I've been checking out some reviews of the film "Clouds of Sils Maria" and finding them close to useless. Most reviews state the movie ends on an ambiguous note. To me, the opposite is true. I glimpsed something exceedingly dark; something horrible, but masked so well that many don't see it at all. The film is a unique specimen in the history of cinema - a subtle horror movie.

For example, this reviewer, Sandra Hall:

Sils Maria is a valley in the Swiss Alps where Nietzsche was inspired to come up with his theory about the cyclical nature of time.

Much is made of this in the publicity for French director Olivier Assayas' Clouds of Sils Maria – which sounds ominous, I know. Fortunately, however, these musings don't find their way into the film, which is left to speak for itself, helped along by its stars, Kristen Stewart and Juliette Binoche.

That's just great! The director tells the reviewers what the movie is all about, and provides them with all that information in their media packets, and the reviewers still ignore everything he just told them!!!


The 19th Century philosopher Friedrich Nietzsche spent many summers at Sils Maria. Certain concepts he coined have become familiar over the years. His 'Übermensch' became a foundational concept in the rise of Naziism, for example. But he had another concept too, one less familiar, called 'eternal recurrence'. This movie explores that concept (without actually saying so, of course - the mask is firmly in place), and places it in its true home (the theater).

Most interesting movie of the decade, so far. Stars Juliette Binoche, Kristen Stewart, and Chloe Grace Moretz. Now showing at the Tower Theater in Sacramento!

[From May 9th] Went back the Tower Theater to watch "Clouds of Sils Maria" a second time. Gleaned some more details, but the shock I felt the first time wasn't quite so great the second time around. Guess I'm getting accustomed to the dark vision of Friedrich Nietzsche: “The higher we soar the smaller we appear to those who cannot fly.”
Posted by Marc at 5:13 PM No comments:

I'm intrigued by these developing weather forecasts showing a low pressure system parking itself in the West and bringing lots of rain over the next two weeks to the Colorado Rockies, reminiscent of the rainfall calamity in September, 2013.
Posted by Marc at 4:52 PM No comments:

That Jade Helm Horse Left The Patriot Barn Long Ago

In regards to Rand Paul and this Jade Helm exercise, I saw the headline: "Rand: I'll look into whether military is planning to takeover the Southwest." News flash: the military took over the Southwest, or at least those parts that mattered to it, during WWII, and shortly after. That is all.
Posted by Marc at 4:50 PM No comments:

I'm bothered about these repeated warnings from the BPD that the Bloods and Crips were planning to unite against them. This need not be correct and advertises weakness. This 'Purge' memo thing is interesting - I wonder who's responsible for that? CNN seemed surprised that rioters appeared to be coordinating with each other. Well, duh, it is the era of Twitter, etc. Last year, they very nearly had riots in Albuquerque, but there, what was most striking was the outsized role of Anonymous, and very perplexing, almost idiotic demands. Here, I have the impression we haven't yet heard of who is coordinating all this, and how agile they may be. Intriguing that the focus appears to be on corporate pharmacies. Maybe it's just where CNN could travel. Every riot is different, of course.

It's very difficult to understand what happens in riots. Even the microcosm of an individual's head is terra incognita. I remember Sacramento in 1992. The riots in LA had just occurred, and a large protest march against police violence was planned. I thought this was a very bad idea under the circumstances. I started talking to a passing pedestrian, who was walking down to join the protest. I tried talking him out of it. He said that in the wake of the murders of JFK, MLK & RFK, it was important to take a stand. I replied that this didn't make any sense: it was 1992, not 1968. But off he went anyway (and fortunately the protest was peaceful). What each participant in a riot thinks is happening, and what's actually happening, may be two different things entirely.
Posted by Marc at 4:49 PM No comments: