OK folks, here it is! Check under Crazy-fornia at this link for my brief shining moment (although I'm identified as an Environmental Activist rather than as a Gubernatorial Candidate)!

A two minute campaign video, which is being sent to California Connected, LA Cable 36, and Purple Cow in San Francisco.
Posted by Marc at 2:10 PM No comments:

An excellent 36-minute interview with Etopia's editor Mark Strassman, on his campaign Web Page (requires MP4 upgrade, however, which is available here).
Posted by Marc at 2:09 PM No comments:

By Michael Falcone, regarding blogging and the California recall election.

Email ThisBlogThis!Share to TwitterShare to FacebookShare to Pinterest
Links to this post
Jon Stewart's 'The Daily Show'

My bit aired last night, September 10th, on Jon Stewart's 'The Daily Show'! Aarghhh! I was apoplectic when I came into work late and saw an E-Mail message from my friend John in Oklahoma that the show had aired, because the folks in New York had told me they would warn me beforehand, so I could alert others. I raced home, but it was too late. The New York folks HAD called and left a message on the answering machine, but I hadn't checked messages before heading out to musical theater rehearsal. The show aired again at 1 a.m., however, so I finally did get to see it. Steve was going to use his TIVO system to tape it at 7 a.m. here, so maybe we'll have something to post later on, or maybe The Daily Show will post it themselves in a few days, as they often do with Corddry's interviews (see Corrdry - On the Road, at the bottom of the page called up by the link above).

I was surprised how little footage they used. They were at the house for nearly two hours. Life in the fast lane, I guess! At least they used the Arnold impression, probably the funniest bit.

Anyway, no 15 minutes of national fame, more like 15 seconds. Still, it's a start!

Debate with the progressive candidates.

Lots of fun Tuesday Sept. 9th with John London (see bottom of the page on the link).

Coming as soon as I figure out the protocol

Email ThisBlogThis!Share to TwitterShare to FacebookShare to Pinterest
Links to this post
Last Weekend in Beverly Hills

On Sunday, the Candidate's Forum met at RJ's Restaurant in downtown Beverly Hills. At first I was going to fly down on Southwest Airlines, but then Jim Weir from Grass Valley, one of the other gubernatorial candidates, offered up to three other Sacramento-area candidates a ride on his company's Cessna airplane. I was the only one who took him up on his offer. So there I was, after an excitable, completely sleepless night, at Sacramento Executive Airport, a few miles south of where I live, at 6 a.m. on September 7th, watching the sky turn from black to blue, and watching for a little bitty blue Cessna coming from the northeast.

I didn't realize how small Cessnas are. And noisy too. I was able to talk to Jim through a headset. Jim teaches at Sierra College in Rocklin and runs his own electrical engineering firm. Jim is a former Nevada County Supervisor, and thus has political experience. It was a beautiful day to fly, and we settled in for the 3 hour flight down the Central Valley, to Van Nuys Airport in the San Fernando Valley.

Except my bladder didn't settle in. I had had quite a bit of fluid, including a soda, before getting on the plane, and thus I found myself in considerable discomfort. Somewhere south of Lemoore NAS, more than a mile above the ground, I learned the art of peeing on a Cessna, using an empty plastic water bottle I had, and praying for no turbulence. Surprisingly, everything passed without incident, and I settled in for a more comfortable flight (although I'm sure Jim had doubts about my judgement, especially regarding the soda).

Approaching Van Nuys, much to Jim's annoyance, a Comanche aircraft crossed our path (airspace is a bit crowded in the LA area). After landing, Jim parked the aircraft, and after losing him in an abortive and embarrassing effort to locate fellow candidate Lawrence Strauss, an effort that put me behind various security cordons, we finally all got reunited for a lift from Lawrence down to RJ's.

Various press clustered around the door of RJ's. I said hello to Cheryl Bly-Chester and Frank Macaluso, and changed my shirt. We moved tables around to form an approximate circle of furniture in the back of the restaurant, and the meeting started.

What a boisterous crowd! Many opinions, some of them clashing, filled the air, stoked by the presence of the cameras we decided to permit to attend. Fortunately, there's a film crew capturing the craziness for a documentary (working title: 'Katie, Bar the Door!'), so maybe in a few months everyone will get a flavor of it.

My main goal was to air my plan to poll the candidates as to the feasibility of the Candidate's Forum endorsing or recommending one or several of us as being best suited to becoming governor of California. Indeed, my polling has already started.

We candidates hold a unique place in California - because of the Candidate's Forum, and other venues where candidates actually meet face-to-face, better than most Californians, we can judge who might make the best governor of the state - because we've met them, or know who they are! Through the media, our collective judgment may perhaps affect the course of the race, by elevating new names, and knocking aside the Top 5 the media seem to prefer to focus on.

In any event, it was a fun day. Met a lot of candidates I haven't seen before. Didn't get any press attention, but c'est la vie. Jon Zellhoefer spent time talking to the press and looking appropriately gubernatorial.

After the meeting, candidate John Beard drove Jim Weir and myself back to Van Nuys Airport. I made a crass comment that probably sounded anti-Semitic: as we passed the impressive Los Angeles Temple, and John rattled off a few names of people who go there, I said something like "and I suppose that isn't a MORMON temple, is it?" John said nothing. But he was nice enough to give Jim and I bright pink hollow plastic piggy banks that say "$ave California - Elect John Beard Governor 10/7/03". John owns a company that produces campaign paraphernalia, so he had a bevy of buttons and bumper stickers as well.

The flight back was quiet. The views were beautiful. The day was one of public meetings and private embarrassments. Then afterwards, 'Music Man' rehearsal at DMTC in Davis (opens Sept. 19th). 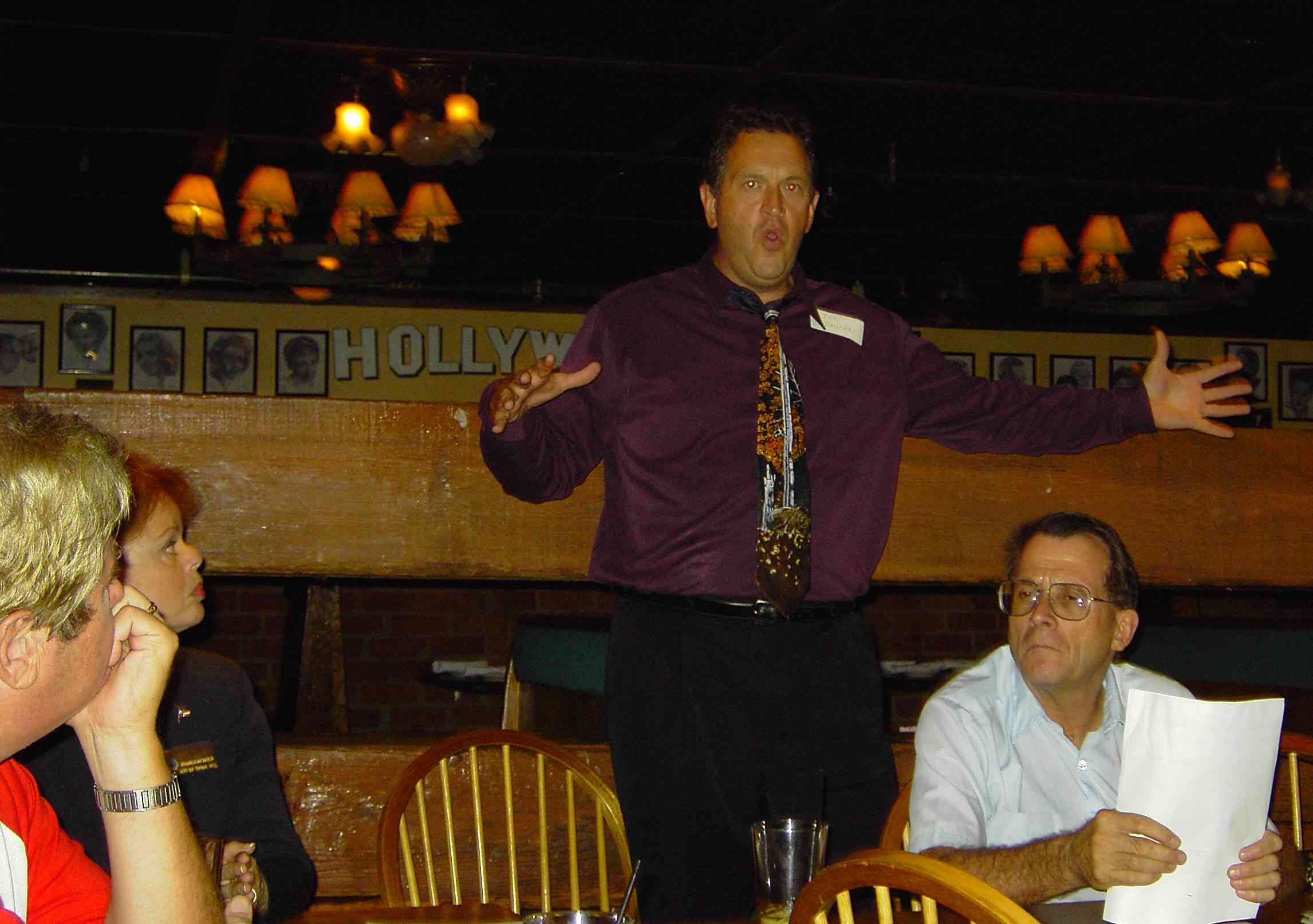 I'm going to temporarily disable the big JPEGs until I figure out how to make them smaller, so the page will load faster into people's computers.
Posted by Marc at 4:50 PM No comments: