This post made me think.... I remember once looking up the Life Magazine that covered the Hiroshima bombing, just to see what people in 1945 thought about it. There is a charming article, with color photos, showing two American soldiers using flamethrowers to successfully set afire a Japanese soldier hiding behind some tropical foliage. It was pretty clear that Americans, of the settled sort that routinely read Life Magazine, considered Japs to be no more than infuriating animate insects. War does terrible things to one's fraternal sense of humanity. In 1945, however, we had a more robust sense of honesty about what we were doing than we do now. We didn't lie as much then, although people like George Orwell could sense the shape of the future to come. Long live Big Brother! (sorry, Little Brother - I wasn't talking about Jeb!)
Posted by Marc at 10:45 PM No comments:

Juan Cole sees Ayatollah Sistani as a big winner in recent Iraqi negotiations, the Kurds as potential losers, and the Americans and British as quite weak. Sistani's determination is beginning to yield results. But will a civil war with the Kurds result?
Posted by Marc at 1:02 PM No comments:

This story is fun:

DES MOINES, Iowa -- A man who claimed he didn't get the taco he paid for has been charged with assault for allegedly pelting a Taco Bell clerk in the face with a chalupa.

He later came into the store, complaining he didn't get the taco he had ordered, police records say. Harrison said that when she asked for a receipt, he went back to his car and brought back the bag.

Harrison said she told him the store was closing, and as she turned away, a chalupa hit her in the face near her right eye. She said she ran into the parking lot and took down the license number as the motorist was driving away.

Lame was identified through the license number.

He is scheduled to appear in court June 15.
-----------
Friend Gene says:
Taco Bell has become a Midwestern institution--there would be mass chaos without it. It's the only place open at 2:30 am after a long night of partying. And that's just where you should be after a long night of drinking--in your car, navigating the narrow drive-thru lane whilst fumbling for loose change.

I say:
It's the strange nomenclature that causes problems. Never having ordered one, I must admit I don't know what a chalupa is. We're not very sophisticated in our Mexican food tastes, even in New Mexico. We just keep adding chili powder, hoping no one asks us to identify what we are eating. How much farther behind they must be in Iowa? That's what comes from that belligerent culinary Mexico City style they've got going on. In the 1980's, in Tucson, the big rave was the restaurant chain (2 restaurants in Tucson and 1 in Mexico City) called 'La Parrilla Suiza' (The Swiss Grill). They don't even have chili at all there. Just big gooey masses of cheese on steaks, in a faux European manner, but with mariachis. Everybody loved it, but most importantly, no one understood it.

Friend Tony says:
one of Tucson's best Mexican restaurants, going back to the 1970s, was a place out on the west side called, i think, Karichimaka. i had my first chimichanga there, and they had mariachis on weekends, but the food was damned good.

I say:
I had my first chimichanga in Tucson: they arrived in NM only after I moved to Tucson, in 1980. That's when I realized that there were regional Mexican food cuisines....although I should have realized that when I visited Tijuana in 1977 and saw shark tacos, which struck me at the time as really bizarre, but then, there's the Pacific so close!

I like conservative Mark Steyn less and less as time goes on (same with blogger Andrew Sullivan, for similar reasons), but Steyn hits the nail on the head here.
Posted by Marc at 6:15 PM No comments:

Reagan did NOT win the Cold War: still, Reagan's impact was greatest with rhetoric. Eastern Europeans noticed other stuff going on, however, like the place falling apart from neglect.

Myself, I never liked the guy.
Posted by Marc at 6:10 PM No comments:

Hard to believe this chain of links!
Posted by Marc at 6:09 PM No comments:

At the vow renewal party at the Vet Memorial, Saturday, June 5th. 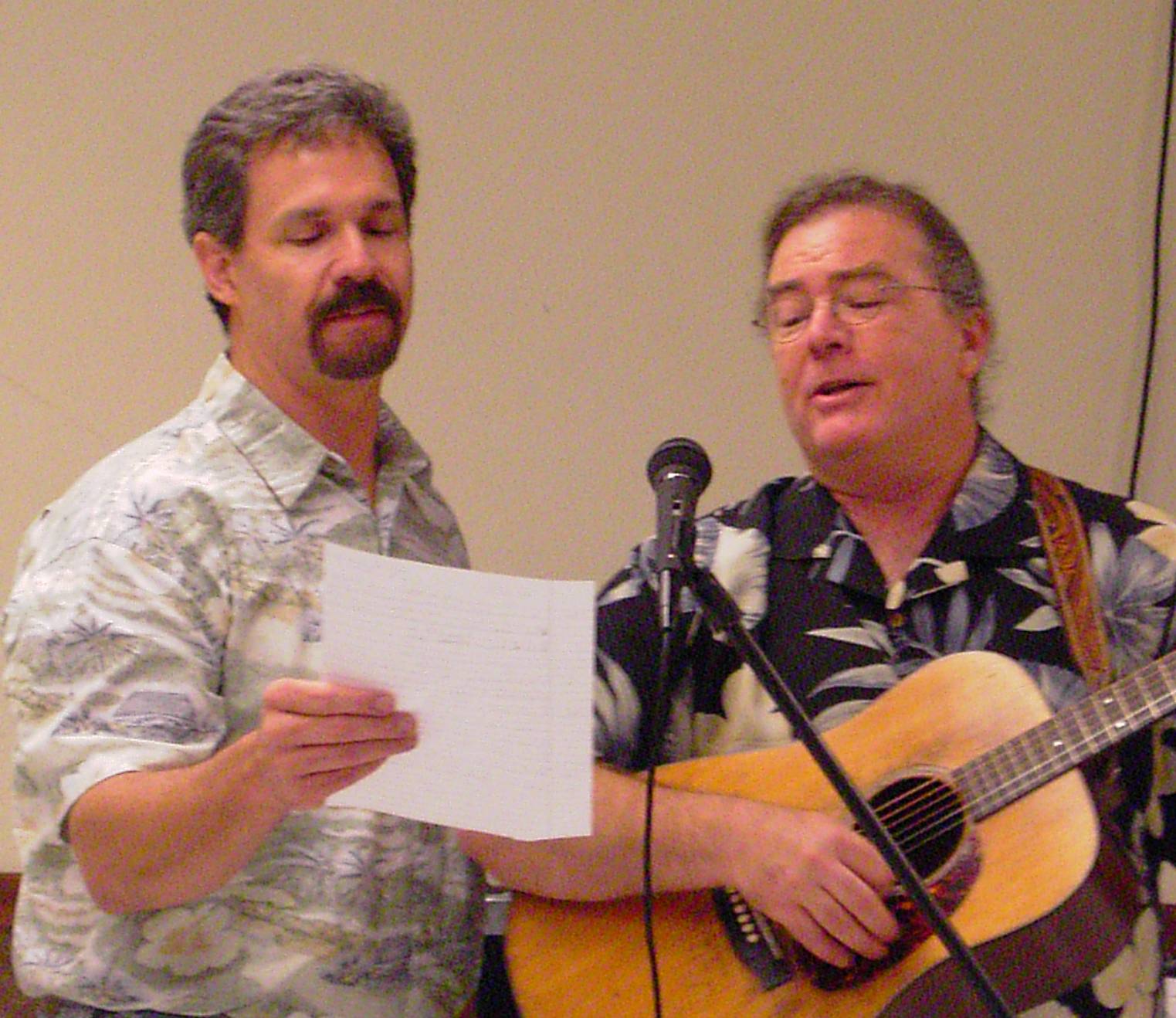 Both (in harmony)
We took a dream, we made it grow
So people just like us could be in the show!
It's thirty years and we're still here...you and me...here at DMTC, DMTC
Together, at DMTC

Steve:
And if you build me a theater, I'll give you the lead!