Hilzoy makes an excellent point. Just because Tom Friedman thinks the Iraqi Sunnis don't think like he does, so then, the hell with them? How utterly arrogant! Especially after we've killed so many Iraqi Sunnis lately! Hilzoy's riff on Friedman:

It is feckless and irresponsible to advocate war without thinking through the various possible outcomes, including the bad ones. This is especially true when there is reason to doubt the basic competence of those who will be executing the war in question, as there surely was after, say, Tora Bora. It is also feckless and irresponsible to advocate leaving when you discover, to your amazement, that recreating a country that has been absolutely brutalized is not child's play, and that the people you knew would be in charge of that task are devoting no more attention to it than a child would. It is worse than irresponsible when the predictable result of withdrawal would be a full-scale civil war, when you explicitly recognize and even embrace that fact, and when you imply that that civil war, which would result in the deaths not just of combatants but of innocent civilians, is the inevitable outcome of Sunni amorality, and not, to any degree, of your own thoughtless cheerleading for a misguided imperial adventure carried out by people whose arrogance is matched only by their incompetence.

Just another example of American disdain for the Muslim world in general (after 9/11, I thought I'd never again quote Gary Kamiya, but my, how times change!):

But the neocons had a far darker view of Islam and the Muslim world as a whole. "A government official who had frequent dealings with Feith, Rhode and the others came up with an analogy for their attitude toward Islam: 'The same way evangelicals in the South wrestle with homosexuals, they feel about Muslims -- people to be saved, if only they would do things on our terms. Hate the sin, love the sinner."

The only thing flatter than the world is Friedman's understanding of it.
Posted by Marc at 1:12 AM No comments:

Please forgive my light posting this week: it's been one of those weeks.

As an illustration, I was leaving work unusually late Wednesday morning (2:50 a.m.) Co-worker R. couldn't sleep, decided to do some work instead, and arrived just when I was leaving.

Which one of us is madder?
Posted by Marc at 9:21 AM No comments:

See what happens when your appetites carry you away!

Alligators have clashed with nonnative pythons before in Everglades National Park. But when a 6-foot gator tangled with a 13-foot python recently, the result wasn't pretty.

The snake apparently tried to swallow the gator whole _ and then exploded. Scientists stumbled upon the gory remains last week.

... The gators have had to share their territory with a python population that has swelled over the past 20 years after owners dropped off pythons they no longer wanted in the Everglades. The Asian snakes have thrived in the wet, hot climate.

"Encounters like that are almost never seen in the wild. ... And we here are, it's happened for the fourth time," Mazzotti said.

..."Clearly, if they can kill an alligator they can kill other species," Mazzotti said. "There had been some hope that alligators can control Burmese pythons. ... This indicates to me it's going to be an even draw. Sometimes alligators are going to win and sometimes the python will win.

"It means nothing in the Everglades is safe from pythons, a top down predator," Mazzotti said.

Email ThisBlogThis!Share to TwitterShare to FacebookShare to Pinterest
Links to this post
'Never Mind' Says The Model!

The NOGAPS model runs today have abruptly changed their minds - no more Bay of Campeche storms, no Columbus Day New Orleans Hurricane - nothing! Fickle, these models are! The model instead posits that Tropical Storm Stan will blow through Mexico's isthmus of Tehuantepec, and redevelop into a coast-hugging Pacific storm, before finally dying out in southern Mexico. Southern Mexico and northern Central America are still a wretched mess.

In the Atlantic, the Bahaman wave has strengthened into Tropical Storm Tammy, which will rake the east Florida coast before sweeping into Georgia and the Carolinas, and before getting swept up into the big trough passing through the Atlantic seaboard. There is an excellent discussion here (Clark Evans' 'One Fine Mess.')

Tammy's upper-level support will pass over the extreme NE Gulf of Mexico, and thus be displaced significantly from the Atlantic storm itself. Heavy showers will initiate in the Gulf of Mexico, NW of Tampa, in response to the upper-level support, but are unlikely to develop into anything more than just heavy showers. It's a good thing when a storm can't quite get itself organized!

There is a marked weakening in the tropical storms still active. The Caribbean is quieting down. We aren't out of the woods yet for this year, but there are signs that the tropics are beginning to settle down.
Posted by Marc at 12:43 PM No comments:

Birds and bees do it, even chimps in a zoo do it:

A CHIMPANZEE in a Chinese zoo has successfully kicked a 16-year smoking habit after becoming hooked when two spouses died and her daughter left.

"In the first few days, she squealed for cigarettes every now and then, but as her life became more colourful, she gradually forgot about them altogether," one zookeeper was quoted as saying.

My own weight loss has slowed dramatically (it's those Reece's Cups, I know it):

...A new study that followed Americans for three decades suggests that over the long haul, 9 out of 10 men and 7 out of 10 women will become overweight.

... Half of the men and women in the study who had made it well into adulthood without a weight problem ultimately became overweight. A third of those women and a quarter of the men became obese.

... The findings, published Tuesday in the Annals of Internal Medicine, show obesity may be a greater problem than indicated by studies that look at a cross-section of the population at one point in time. Those so-called "snapshots" of obesity have found about 6 in 10 are overweight and about 1 in 3 are obese, Vasan said.

...Susan Bartlett, an assistant professor of medicine and an obesity researcher at the Johns Hopkins School of Medicine, said the study was one of the first to look at the risk of becoming overweight.

"The results are pretty sobering, really," said Bartlett, who was not involved in the research.

The study shows Americans live in an "environment in which it's hard not to become overweight or obese. Unless people actively work against that, that's what's most likely to happen to them."

... As for the Framingham study, Mark Vander Weg, a Mayo Clinic psychologist who researches obesity but was not involved in the study, said it is one of a few to track a group of individuals over an extended period.

"What's particularly concerning is that these results actually may underestimate the risk of becoming overweight or obese among the general population" because minorities, who are at increased risk for obesity, were not included in the study, Vander Weg said.

Recent trends also suggest that people currently coming into middle age may be even more likely to become overweight or obese than those who were studied, Vander Weg said.

Email ThisBlogThis!Share to TwitterShare to FacebookShare to Pinterest
Links to this post
A Columbus Day Hurricane In New Orleans?

Today's NOGAPS forecast suggests a possible fate for the storm I'm calling "Stan II" (until it actually develops and gets a name): a second New Orleans hurricane, just in time for Columbus Day! It's very worrisome, though: just a flick of fate and it could become a Tampa hurricane instead (or anywhere on the eastern Gulf of Mexico coast).

Hurricane Otis has winked out of existence, with just a remnant low left behind. It's moisture didn't rain out over AZ after all: instead, the moisture streamed NNE over the state, where it is contributing instead to a rain event in the northern Rockies (where they really need it), and will also soon contribute to heavy rains in the Great Plains along the Canadian border (and in Minnesota, where you are Bruce! Ask not, for whom the hurricane blows: it blows for thee!)

The Bahaman low continues to develop, and will cause heavy rains in eastern Florida (probably tomorrow), and the Carolinas (towards week's end).
Posted by Marc at 12:55 PM No comments:

Grab A Name, Any Name

This crazy season, we might run out of hurricane names...
Posted by Marc at 4:28 PM No comments:

Two years ago, Cheryl Bly-Chester roamed the state with a bus of unknown candidates in the 2003 recall, tailing Schwarzenegger on the campaign trail.

Bly-Chester, a Roseville engineer, helped organize the multiday bus tour from San Diego to Northern California in a desperate attempt to attract media attention in the 135-candidate race.

The bus tour didn't make Bly-Chester famous - she won 4,527 votes to finish 17th that year. But she credits her two-month foray into campaigning for her nomination last week to the state Reclamation Board, California's lead flood-control agency.

Schwarzenegger apparently didn't hold any grudges against his former opponent.

"Technically, he ran against me because he declared after me," Bly-Chester mused. "I think he had a good sense of proportion about the whole thing."

Bly-Chester said she has supported Schwarzenegger since he took office and has become active in Placer County Republican politics since the recall.

The future is worrisome, however. As the week advances, the Bahaman showers may form into a tropical depression and start advancing northward in a disorganized way up the east Florida coastline, into the Carolinas, reemerge over the Atlantic, and eventually strengthen into a tropical storm. I'm more worried about what will happen in Mexico's Bay of Campeche, though. After Tropical Storm Stan rains out in southern Mexico, a new storm will develop in about the same place (Stan II?), and it will be placed in a perfect position to cross the Gulf of Mexico, and hit the Tampa, Florida area from the west. The possible future scenario is well past the six-day model run length (more like two weeks: Oct. 12th-13th), however, so it need not happen, but it's something to watch out for.

Hurricane Otis is weakening, and the rains from it are still forecast to hit AZ (Tuesday evening?)
Posted by Marc at 4:04 PM No comments:

Email ThisBlogThis!Share to TwitterShare to FacebookShare to Pinterest
Links to this post
"Fiddler on the Roof, Jr."; Young Performer's Theater (YPT), DMTC 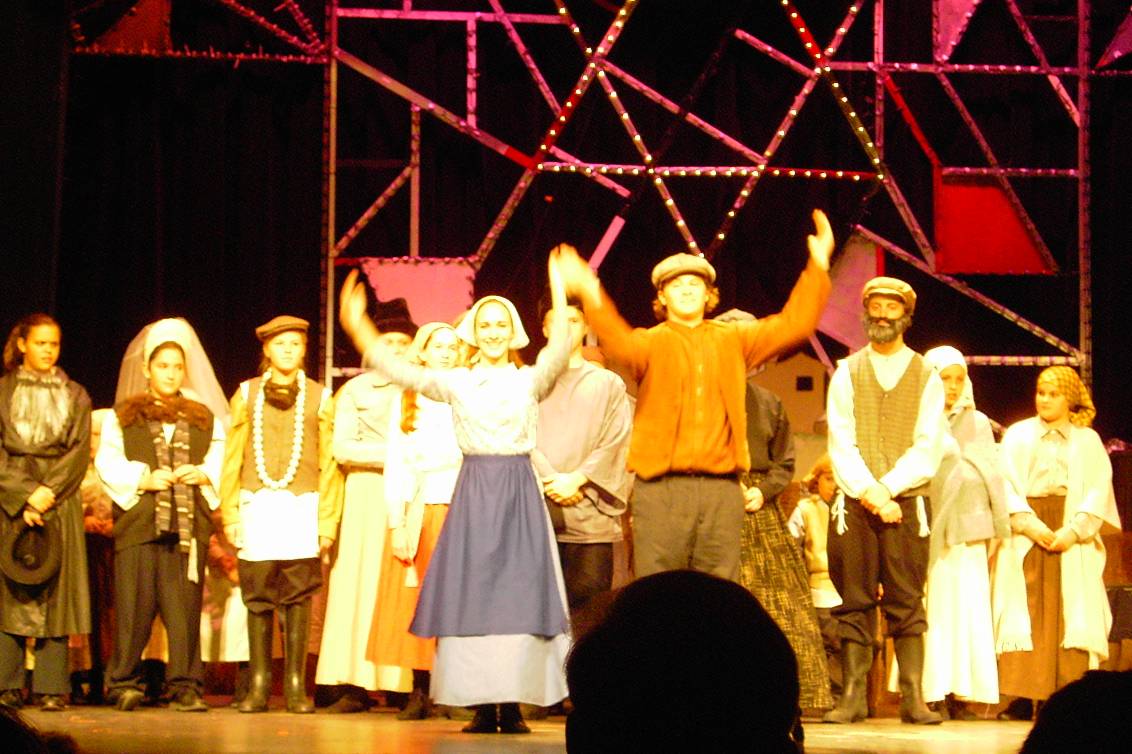 This was the best of the (generally-not-that-good) bunch of pictures of bows that I took: Emily Jo Seminoff (Hodel) and Justin Biewer-Elstob (Perchik).

Went and saw "Fiddler on the Roof, Jr." Sunday evening. I'll write up a mini-review when I have more time....(Outline)

Book appears to be edited. Most changes are minor - circumlocutions dropped, but some scenes rendered rather illogical by script changes. Nevertheless, the cast did the best they could given the changes.