Back When Crack Was King 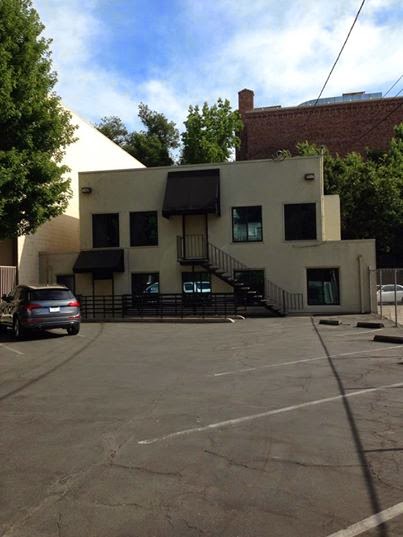 This parking lot brings back nostalgic memories of the crack cocaine epidemic of 1990. In 1990, this was my workplace, behind the Old Governor's Mansion on I St. in Sacramento. The many drug dealers in nearby motels enjoyed the convenient parking lot lighting and sold their wares here after hours. Teenage hoodlum lookouts watched the area during the day. It made me nervous. So, I started lingering after work, spying on the sales, and calling the cops whenever the action was hot. The drug dealers didn't know what hit them. Eventually, after several sets of arrests, they associated bad luck with the parking lot and pushed on.
Posted by Marc at 5:02 PM No comments:

Trouble At The Fishhook Interchange 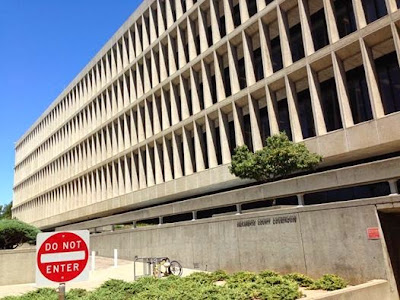 For the last week and a half, I've been part of a jury empaneled at the Sacramento County Courthouse to listen to, and decide, a civil suit regarding a troubled construction project, the 2006 rebuilding of the Fishhook Interchange (Highways 1 and 17) on the outskirts of Santa Cruz, between the plaintiff, Cooper Crane & Rigging, Inc./West Coast Welding, Inc. Joint Venture, and against the defendants, Pavex-Myers, Joint Venture; SAFECO Insurance Co. of America, Inc.

There certainly were troubles aplenty at this interchange:

The highest traffic volume on Segment 17 occurs on sub-segment 17C where 2002 volume was 109,400. Volume could rise to 137,000 in 2025. Level of service was “F” in 2002 and would perform even more poorly in the year 2025. At present this sub-segment is a four-lane freeway. Segment 17 ends at a complex interchange with SR 17 and Segment 18 of Route 1. One element of the interchange is a looped ramp called the “fishhook”, which carries northbound traffic from Segment 17 on to Segment 18 at a lower grade. Topographic and environmental concerns and the high cost of reconfiguring this interchange for safety, improved operations, and additional capacity have challenged Caltrans and the community for years. 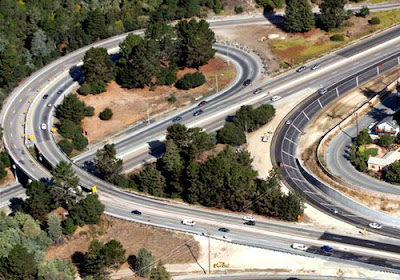 General contractor Pavex/C.C. Myers had a big plan for the intersection:

The Highway 1/17 Merge Lanes Project in Santa Cruz kicked off in April 2006. This Joint Venture with Pavex Construction Company involved extensive clear and grub followed by a large dirt moving operation to cut slopes adjacent to Highway 1, moving the material to the Branciforte Creek and Carbonera Creek areas. Peripheral sound wall and creek work, including diversions, cofferdams, demolition, and excavations, was completed in October 2006.

The creek bridges were followed by bridges on Emeline St., Market St., and Branciforte Ave. In addition, several retaining walls were constructed. This project was completed in July 2008.

Cooper Crane & Rigging, Inc./West Coast Welding, Inc. were brought in as a subcontractor to excavate and build the Cast-in-drilled-hole piles (CIDH piles). These piles were intended to be firmly lodged into basement rock according to CALTRANS drawings and specifications, and Cooper Crane bid the job with that expectation.

The trouble started when the actual site didn't match the CALTRANS drawings. The basement rock was deeper than the drawings indicated, and much-deeper drilling was called for. Valuable time was wasted in trying to adjust to the changed circumstances. In time, it was decided to pour a concrete slurry to form the base of the piles instead of using the cast-in-drilled hole method. This approach wasn't envisioned during the bidding process, and would cost a different amount of money. In addition, CALTRANS called for an acceleration of the work (but did not see fit to issue a change-order). Given the 'change of character' of the work, it was agreed that Cooper Crane would follow a Force Account method to bill for the work, which they hoped CALTRANS would pay through Pavex/Myers, provided they could 'establish merit' that the work they were doing was necessary. As the work proceeded, various frictions between the contractor and subcontractor occurred, and each assessed back charges against each other. Pavex/Myers also obtained a second drill rig from another subcontractor to assist Cooper Crane accelerate the schedule.

(I hope I'm getting the essence of the case here, without distorting overmuch what happened.)

Quite surprisingly, CALTRANS did not find that Cooper Crane had 'established merit', and wouldn't pay their extra expenses. CALTRANS maintained that there was nothing about the character of the site that had changed, and so the original bid should have sufficed. A complicated arbitration process followed, which allowed Pavex/Myers to eventually settle for a portion of their expenses. Cooper Crane was out of luck, however. They hadn't been paid for some of their work, and Pavex/Myers had charged back charges they felt were inappropriate. In addition, there was no change order to cover the second drill rig. Cooper Crane felt it wasn't supposed to be part of the Force Account work, but Pavex/Myers wouldn't pay for it, since there was no change order from CALTRANS. So Cooper Crane filed suit against Pavex/Myers for expenses and Pavex/Myers countersued to force Cooper Crane to pay for the drill rig.

The cases have been in a complicated limbo ever since. Here is something from March of this year:

Defendants Pavex-Myers (“Pavex”) and Safeco Insurance Company of America, Inc.’s (collectively “Defendants”) motion for summary adjudication of Plaintiff Cooper Crane & Rigging, Inc./West Cost Welding, Inc.’s, (“Plaintiff”) claims for prompt payment penalties and attorney’s fees is ruled upon as follows. This motion is brought pursuant to CCP §437c(s)(1). The parties have stipulated that the Court hear the motion and that resolution of this motion will either further the interests of judicial economy by reducing the time to be consumed in trial or significantly increase the ability of the parties to resolve the case by settlement. Pavex is admonished as its separate statement does not comply with CRC 3.1342(h). Defendant separately identifies 16 undisputed material facts. Defendant also moves for summary adjudication on 3 issues. However, Defendant did not repeat verbatim the undisputed material facts below each issue. Rather, Defendant simply identifies the number of the undisputed fact in support of the issue.

This is an action arising out of a construction contract for the California Department of Transportation (“Caltrans”). Pavex was the general contractor on the project. Plaintiff was a subcontractor hired to install cast-in-drilled-hole piling, among others items. Problems arose with the project which resulted in Plaintiff conducting additional work on contract items 97, 98 and 99. Plaintiff submitted a claim to Pavex for the additional work, which Pavex “passed through” to Caltrans per the subcontract agreement. The matter then proceeded to an Office of Administrative Hearings. Pavex was the Petitioner, Caltrans was the Respondent, and Plaintiff was an interested party. The arbitrator found in favor of Pavex and awarded $1,950,853.00, of which $92,898 was for Pavex’s 5% mark-up on the claim. Plaintiff alleges that pursuant to the force account payment terms, Pavex failed to timely pay Plaintiff. (FAC, ¶ 13.) Plaintiff alleges that “as determined by the arbitrator, Plaintiff was forced to self-finance work performed to the tune of $1,857,956.00 due to defendant Pavex/Myers’ failure to pay Plaintiff in accordance with the terms of the Subcontract, its incorporated force account provisions and its implied terms.” (FAC, ¶ 15.)

Attorneys’ Fees based on Prompt Payment Statutes
Pavex argues that Plaintiff is not entitled to attorneys’ fees pursuant to Pub. Contracts Code §10262.5 because Plaintiff is not entitled to prompt payment penalties. The motion for summary adjudication is DENIED. The Court has denied Pavex’s motion for summary adjudication on Plaintiff’s entitlement to prompt payment penalties.

Pavex’s objections to the Declaration of John Gladych are ruled upon as follows:
Sustained: 5
Overruled: 1, 2, 3, 4

The minute order is effective immediately. No formal order pursuant to CRC Rule 3.1312 or further notice is required.


As you can see, just to describe the nature of the problem requires great specificity and knowledge of the law. I am just a simple person, and find it all quite trying. Nevertheless, we twelve were chosen to decide the case. I was surprised I was chosen. My experience with voir dire for criminal cases in the past has been that I get rejected quickly from the process because of my Ph.D. degree. Scientists and engineers tend to look a matters cold-bloodedly, and reject emotional pleas, making us bad risks for criminal defendants. In this civil case, however, my background is a benefit, because it means I can pay attention to details. These sorts of details are well out of my ken, however, so I found it tough going. Nevertheless, some of the others on the jury had backgrounds in accounting, and some familiarity with contracts, so following the bouncing ball was a little easier for them.

I was very surprised on the opening day of the trial when the jury was introduced to Dan Himick, CEO of C.C. Myers. Holy crap, what is he doing here?! Sacramento's Fix-50 highway project, which was being supervised by C.C. Myers wasn't yet wrapped up! C.C. Myers construction firm has a spectacular reputation as the state's go-to company when the State of California needs to beat deadlines to rebuild economically-crucial infrastructure that collapses due to earthquakes, etc. There are times when the CEO of C.C. Myers is arguably more important than the Governor of California! Yet here he was, with far-more-important matters calling for his attention, here in this courtroom!

The attorneys were very professional, and after years of sparring against each other in pitched battles, very cooperative with each other in presenting their cases.

Initially, I sided with the plaintiff, but was the case advanced, I gained sympathy for the defendant. They were acting according to their interest, of course, and largely honorably. The real malefactor here was CALTRANS, which unfortunately wasn't part of the cases. These two contractors were trapped in a web of CALTRANS' making. The night before our deliberation started, I wasn't even sure in my own mind what stance to take regarding these cases.

And so, yesterday July 1, 2014, we the jury found on behalf of the plaintiff, Cooper Crane & Rigging, Inc./West Coast Welding, Inc. Joint Venture, and against the defendants, Pavex-Myers, Joint Venture; SAFECO Insurance Co. of America, Inc. I was quite surprised how quickly we came to a verdict - 2.5 hours. That was even faster than the 3 hour deliberation in the 1984 murder trial I was a juror for before!

I was most curious about Exhibits 509 and 510, the CALTRANS merit denial, which I found astonishing, but which were outside the immediate scope of these lawsuits.

Exhibit 2 was the contract between Pavex/Myers and Cooper Crane, and contained boilerplate language reserving certain rights to Pavex/Myers for delaying payments in the event of disagreements, etc. As emphasized by various jurors, however, this language was struck out by mutual agreement, and initialed by Pavex/Myers. That meant Pavex/Myers COULD NOT withhold money for back charges, at least in the manner Pavex/Myers cryptically did, with perfunctory explanations given to Cooper Crane. Cooper Crane had better records than Pavex/Myers did, and the jury was inclined to believe their arguments as a result. Thus the jury found on behalf of the plaintiff. Regarding the second drill rig, since Pavex/Myers had initially arranged for the second drill rig to come to the site and didn't provide adequate invoices for showing how payment was to be arranged, the jury found against Pavex/Myers in their counter suit against Cooper Crane. These determinations were unanimous. (I had some reservations regarding the drill rig, since both parties benefitted from its use, but even if I had voted against this matter, the jury's 11-1 majority would have sufficed to meet the applicable 9-3 preponderance-of-the-evidence civil-case criteria here.) Everywhere, there signs that haste to meet the Accelerated Effort's demands compromised the contracting process. Certain jurors, particularly with accounting backgrounds, were much-more-certain of their positions than I was.

Afterwards, we learned that the potential for awarding damages had been removed from our jury instructions just the day before. I have no doubt that had that option been available, the jury would have awarded damages to Cooper Crane.