Here is Cyndi's excellent video about our current production of "Man of La Mancha" at DMTC! 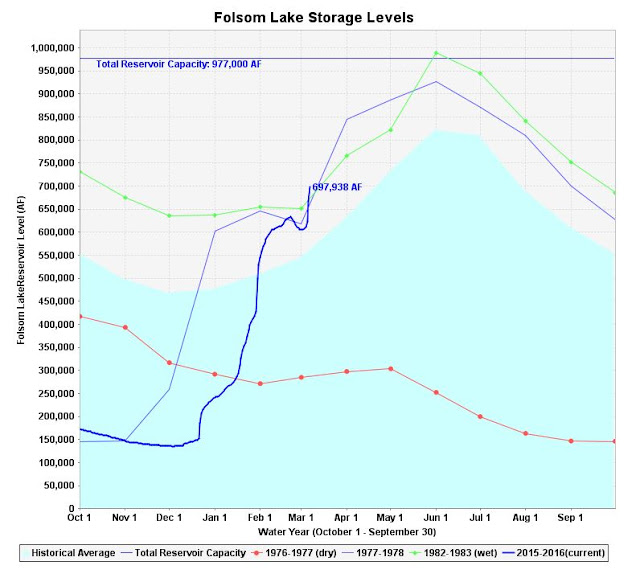 Folsom Reservoir is filling rapidly. They are now releasing water at a greater rate in order to have room for later snow melt. Air One, the Sac PD helicopter, recently went up and down the American River Parkway warning homeless campers there to beware, and they even had to send rescuers to pull people out who found themselves suddenly surrounded by water.

I remember a trip to the Grand Canyon in 1975. A helicopter came down to ask us whether we had seen lost hikers. There is something distinctly disturbing about having a conversation with a helicopter. From the landscape of dreams....
Posted by Marc at 4:10 PM No comments:

I've had Bella for a year now. She's been enthusiastically nose-forward in the neighborhood ever since.

About a year ago, a co-worker lent me a box set of the TV series "The Wire". She likes it even better than "Breaking Bad". My DVD player was crotchety, and it wasn't until last month I bought a new one, so I'm only just now starting to binge-watch it, and become familiar with gritty urban Baltimore.

Lately, Bella made a fateful, logical connection. It dawned on her that the Broadway corridor = cafes = spilled takeout and scattered food fragments = Paradise. So, she yanks me down Broadway every night, west towards the Tower Theater, hoovering up the exotic scents. As a result, since Broadway is a main street, we are seeing more people when we walk, even very late.

For weeks, I knew some homeless person or other had been scattering boxes and other debris behind the bushes and a brick facade next to one office building, but I hadn't actually seen anybody, until Bella and I suddenly found ourselves three feet away from a surprised, hollow-faced young man. 'Wow,' I thought, 'he looks exactly like a junkie on "The Wire"'! "Howdy", I said. "Hi", he awkwardly replied. Bella dragged me past, intent instead on scattered Thai takeout.

During a recent rainy night, Bella and I encountered a raggedy homeless couple huddled under a canopy. The tiny, wizened, leather-faced woman smiled when we approached. I said, "Say hello Bella". The dog complied in her forceful, nosy way. The woman said, "Bella means beautiful in Italian!" As we headed off, she called out after us, "Watch she doesn't trip crossing the railroad tracks!"
Posted by Marc at 4:09 PM No comments:

1.) Overburdened while climbing back porch steps at night. Drop checkbook unnoticed into a puddle;

Don't Hold Back When The Mood To Twerk Strikes

HARRIS COUNTY, Texas – A bizarre standoff with a naked woman dancing on top of a big rig brought traffic on US-290 to a halt Monday morning.

The westbound lanes of the highway were shut down for more than two hours while the woman entertained drivers stuck in the standstill.

Views from Air 11 showed the woman twerking and gyrating for passing vehicles just after 9 a.m.

What an excellent election-season song!

Big storm roared through! Wind, rain, and drama! Today was the wettest day in Sacramento for a long time, probably since Dec. 11, 2014. At Sacramento Executive Airport, 2.11 inches of rain have fallen since yesterday afternoon. I even had minor flooding in my basement.

More rain is coming tomorrow evening. Hopefully these storms will boost our rainfall amounts sufficiently to at least come to par with a normal winter. The drought continues, and the damage continues, and only a lot more rain - a LOT more! - will end it.
Posted by Marc at 4:04 PM No comments: