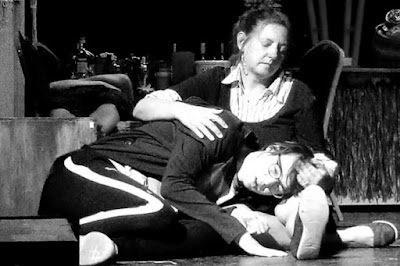 
I wrote a review of "Angels in America" that will soon be published at the Davisite web site, but here is the text for those of you considering going to see the show and making plans today.

"Angels" is a really wonderful show. Let's all see it.

“Angels in America: A Gay Fantasia on National Themes,” written by Tony Kushner, is an epic story that starts in December, 1985, with an epilogue set in 1990. There are two parts of “Angels.” The entire epic spans almost six hours: 2 ½ hours for Part 1, and 3 hours for Part 2. “Angels” is directed by David Blue Garrison, with set design by Fred Lamora, lighting design by John Evans and special effects by Jennifer Young.

Nate Lynn’s intensity radiates in his portrayal of fevered Prior. Alexander Quinonez portrays well the conflicted (and wordy) character of Louis. Eric Craig’s sincerity captures the character of Joe Pitt, and Denver Vaughn is marvelous as Harper.

I was struck by the theatrical lighting when Louis and Prior make their first appearance: red on one side and blue on the other. The two halves of their faces are thus differently-colored, suggesting two-facedness (a characterization that might apply to Louis). A budding prophet under the lash of AIDS, Prior doesn’t have the luxury of being anything but sincere.

Another key figure in the story is diabolical Roy Cohn, historical right-wing lawyer, with close connections to Joseph McCarthy, among others (excellently played by Steve Gold). Cohn is a closeted homosexual who despises the weakness of most homosexuals, and brazenly denies even to his own doctor (portrayed energetically by Richard Spierto) that he has AIDS, despite incontrovertible evidence to the contrary. In “Angels,” Roy Cohn is Joe Pitt’s mentor.

In a sense, Roy Cohn too is a visionary. Years of effort have finally reached the cusp of fruition, and just in time too. The Reagan Revolution is a new dawn perfectly-made for ambitious young conservatives like Joe Pitt. Roy Cohn wants to place Joe in the Justice Department, where he can interfere with efforts to have Cohn disbarred for stealing from a client.

By the 1980s, the national outrage over the 1951 trial and 1953 execution of Julius and Ethel Rosenberg had retreated to just a few precincts of the Left. Author Tony Kushner recognized that Ethel Rosenberg had become an American ghost. In “Angels,” Roy Cohn boasts about his greatest achievement, illegally intervening in Ethel’s espionage trial and thus guaranteeing her execution. The ghost of Ethel Rosenberg (whose arch disdain is ably played by Michelle Champoux), whom Roy sarcastically dubs Mrs. Reddy Kilowatt, haunts Roy for the rest of the show.

Abandoned by Louis, Prior in his illness finds a more reliable caretaker in former lover Belize (aptly-played by Corey Winfield), an ex-drag queen. When Joe Pitt drunkenly confesses to his mother Hannah (Rachel Hoover) that he is a homosexual, she sells her house in Salt Lake City and comes to New York to set things straight.

The emphasis on visions continues in Part 2 of “Angels” (Perestroika). The World’s Oldest Bolshevik (whose despair is made manifest by Richard Spierto) laments modern visions of the future, which lack the clarity that his generation had provided to the world. “Show me the theory!” he pleads.

An Angel (dramatically played by Tara Henry) gives Prior a prophetic book and explains that she seeks his help to halt the migratory tendency of human beings. Prior Walter refuses to accept this mission – he ultimately conceives a vision of his own to give to the Angels.

Of the four principal actors, all but Harper have family histories deeply intertwined with American history. Louis comes from a Jewish immigrant background, Prior from a WASP heritage, and Joe from strong Utah Mormon stock. The three heritages are all quite different from each other, however. How can these disparate American traditions be unified in such a sprawling work? None of the four principals can do so.

Ordinarily, given his age and experience, the task of pulling the story together would fall to evil power broker Roy Cohn, but he is too sick to prevail. Instead it is Joe’s mother, Hannah Pitt (whose evolution is perfectly captured by Rachel Hoover) who moves beyond rigid expectations and invites the rest of us to embrace a more inclusive understanding. Hannah says: “An angel is a belief. With wings and arms that can carry you. If it lets you down, reject it.” Hannah also says: “You can't live in the world without an idea of the world, but it's living that makes the ideas. You can't wait for a theory, but you have to have a theory.”

Unexpectedly, the show has something of a happy ending. Don't let this wonderful show get past you!


Tickets are available at: Part 1 Part 2

Big Drug Lab Bust About Four Blocks From My House 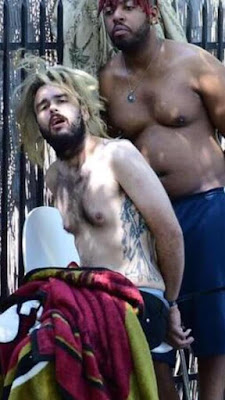 My neighbors are more interesting than I gave them credit for.
Posted by Marc at 11:04 PM No comments:

What was lost is now found:

Betty Sissom, 89, received the gift of a lifetime last week when her wallet from the mid-1940s was returned to her.

Sissom's wallet, along with more than a dozen others, was discovered when a congregation in Centralia, Illinois, was converting the former Centralia High School building into a church. Pastor Seth Baltzell said a plumber found the wallets stashed in the wall of a girls' bathroom.

"We've been working on this building for six months. I've been kind of waiting for that really cool thing that nobody's seen in the last 75 or 100 years to pop out," Baltzell said.

Some Fuckery Out Near Benson, Arizona

The entire system of permits is intended to place development decisions on a rational, depoliticized basis. Shit like this makes a joke of the process:

In the summer of 2017, Arizona developer Mike Ingram's proposed housing and golf course project in the desert was facing a road block because of a decision by the Department of the Interior.

A field supervisor for the US Fish and Wildlife Service had determined that it was "reasonably certain" that threatened and endangered species could be harmed.

But that decision suddenly changed following a secret breakfast meeting at a Montana hunting lodge between Ingram -- a donor to President Donald Trump and co-owner of the Arizona Diamondbacks -- and David Bernhardt, then the Trump administration's deputy Interior secretary.

Following the meeting, which did not appear in Bernhardt's official calendar and has not been previously reported, the field supervisor says he was pressured to reverse his decision, allowing the project to move ahead.

"I felt pressured to reverse my decision ... in simplest terms, I was rolled," Steve Spangle, then a 30-year veteran of the Fish and Wildlife Service, told CNN in an interview. "I made a decision, which was my authority to make in Arizona, and that was overruled by higher-ups in the administration." 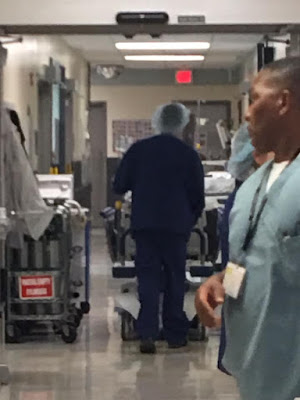 11 a.m. July 8th at Kaiser Permanente Hospital, Roseville: Erlynda is wheeled off to surgery.
Posted by Marc at 10:36 PM No comments:

Somewhere along nearby arroyo walls and riverside ditches