The Muchachos Thank You, Dr. George! 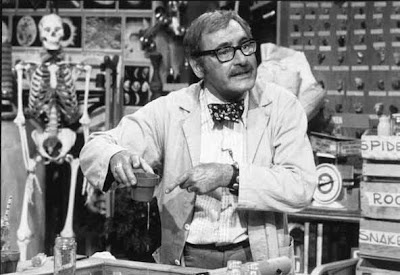 
George Fischbeck, who became a phenomenon in Albuquerque as a television science teacher and meteorologist in the 1960s and early ’70s, before being lured to Los Angeles where he continued as a top rated TV weatherman, died early Wednesday from natural causes. He was 92.

Dr. George, as he was known, had been living in the Motion Picture & Television Fund retirement home in Woodland Hills, Calif.

He was born in New Jersey, where he was exposed to immigrant workers from around the world on his family’s farm. That sparked his interest in cultures. He later moved to Albuquerque to study and earn his bachelor’s degree in anthropology and archeology at the University of New Mexico. He subsequently received a master’s degree in education from UNM and became a teacher in the Albuquerque Public Schools for 23 years.

In 1959, a program director at local PBS station, KNME-TV, Channel 5, asked Fischbeck if he wanted to do a 30-minute TV science program for Albuquerque students. The program, “Science 5,” became so popular that it was picked up by schools in 25 cities around the country.

In 1970, Fischbeck was hired to be the 6 and 10 p.m. weatherman on KOB-TV, Channel 4, Within weeks, the station’s newscast moved from second to first.

In 1972, he moved to Los Angeles after accepting a position as weatherman for KABC-TV. In 1994, he moved to KCBS-TV, also in Los Angeles, where spent a few years doing feature stories.

It's nice to remember that it used to rain in California!

Here is Dolly's excellent fitness party at Momo's in December. (I appear briefly at 1:22, having fun, but looking a trifle clueless.)

Eclipse Of The Cash Bundlers

The eclipse of the campaign cash bundlers. They used to be in high demand, but this time they can't compete with the SuperPACs. Time to push a shopping cart around town and collect recyclables like the rest of us:


“They are only going to people who are multi-multi-millionaires and billionaires and raising big money first,” said Neese, who founded a successful employment agency. “Most of the people I talk to are kind of rolling their eyes and saying, ‘You know, we just don’t count anymore.’ ”

Decision time. Do I take Bella the Labrador Retriever, or not? Joe the Plumber had always managed to keep her before, but his situation has deteriorated to the point where options are dwindling. And she is a sweetheart....
Posted by Marc at 3:44 PM No comments: 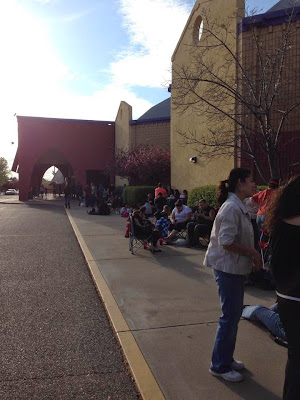 Strange ritual. Standing in a line with Justin to see an animated Dreamworks movie preview, "Home".

Rihanna as Tip. Matt Jones (Badger from 'Breaking Bad') as Kyle the Traffic Cop. Justin says "O" is from 'The Big Bang Theory'.

Justin gets free tix to the previews: movies I wouldn't ordinarily consider seeing. It's very sweet and clever film. Glad I saw it.

Ken Ford vs. The Feds

Wow. DOE overreach, post-9/11. The net effect over time will be to create a citizenry dangerously uneducated about nuclear weapons. I once met a Iranian who thought buildings in a city center could shield a bomb's blast from damaging the rest of the city. Crap like that. Article contains an interesting oversight, which I can spot after working at the Kirtland AFB Weapons Lab in ABQ in the 70's. The surface of the island of Elugelab wasn't so much vaporized as it was punched deep underwater, as the coral collapsed under the astonishing overpressure of the nuke. Know your nukes!:

The author, Kenneth W. Ford, 88, spent his career in academia and has not worked on weapons since 1953. His memoir, “Building the H Bomb: A Personal History,” is his 10th book. The others are physics texts, elucidations of popular science and a reminiscence on flying small planes.

He said he included the disputed material because it had already been disclosed elsewhere and helped him paint a fuller picture of an important chapter of American history. But after he volunteered the manuscript for a security review, federal officials told him to remove about 10 percent of the text, or roughly 5,000 words.

“They wanted to eviscerate the book,” Dr. Ford said in an interview at his home here. “My first thought was, ‘This is so ridiculous I won’t even respond.’ ”

In the late 70's I was a UNM work-study student at the Kirtland AFB Weapons Lab assigned to the group studying geology of the atolls, so as to understand weapons effects better. The big project of the day was the MX missile, which was supposed to run in underground tubes in the AZ desert west of Tucson, but after many billions were spent I understand they discovered the underpressure following the main shock wave of a single atom bomb striking the tube network would lead to instantaneous collapse of the entire network of tubes. That discovery forced a radical redesign of the program. The public story for the redesign was the program had become too expensive and had to be scaled back; the back story was they had inadvertently incorporated a fatal flaw.
Posted by Marc at 3:38 PM No comments:

This is pretty cool. Back around 1977 I took a dance movement class at UNM with Jennifer Predock, and it's nice to see she's still choreographing modern dance: for example here, at White Sands, NM.

Cruz Gets In My Craw

It's interesting listening to blowhard Ted Cruz as he spins a variety of fictions and tales, too many to fully enumerate, such as:

2:32-3:07: Americans have had times before now when the outlook for the new generation looked bad. Remember The Depression anyone? Not much optimism in the 30's, judging based on their writings. There is nothing unprecedented about our current times. Resembles the crash-prone 1890's in some respects.

7:04-8:25: Ted Cruz wants a Flat Tax. Allies such as the Mormon Church have repudiated Flat Tax. Reconcile your lame position, please. I like the image of IRS agents on the southern border, but it's a laugh line, not a serious proposal.

13:57-14:30: Do you remember why the IRS was tasked with looking more-closely at political non-profits? It isn't because they want to know the content of your prayers. The NSA wants that. It's because Congress wants to make political donations non-taxable and wedge them into the same exemptions that charities receive, but doesn't have to courage to vote accordingly, so gives the IRS the thankless task of distinguishing among the various types of political non-profits based on very fuzzy criteria they prescribed. To turn around and then use that task assigned to them as the basis of a political attack on them is pretty scurvy, and pretty typical for a Republican.

25:13-27:54: Obama and Carter are actually much different. Carter grappled with inflation. If anything, Obama grapples with deflation. Inflation is lower today than anytime in my lifetime. Or the lifetime before mine. Or the lifetime before that. Only neurotics worry about inflation these days. Obama's policy towards Israeli hardliners is much more gentle than Carter's ever was. I don't why Cruz thinks it's terrible for foreign leaders to mock Obama, when he does nothing but mock Obama himself. People also forget that the reason there was rapid growth after the 1982 recession (which broke the back of inflation at the cost of very high unemployment) was rampant deficit spending to support the Reagan military buildup. Typical GOP hypocrisy on budget issues. And for Cruz to claim Cold War victory for Reagan is asinine, since Democrats like Harry Truman were responsible for the multi-generational, ultimately-successful policy of containment. Republicans did little but get in the way.

Ted Cruz has no business being anywhere near power. 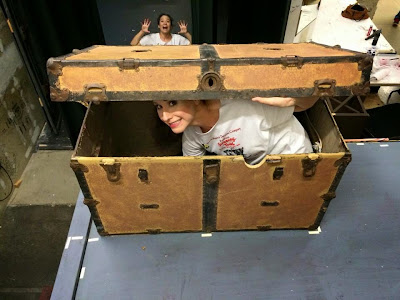 Here's a wonderful picture! (Don't know who took the photo.)

The view is from the stage left wing, top of The Cube, with Jori Gonzales (Johanna) in the trunk and Eimi Taormina (The Beggar Woman) in the background.

It always amazed me how quickly Jori could get in and out of that trunk!


It was great fun to be Stage Manager for DMTC's production of "Sweeney Todd"! Today's final show (03/22/15) coincided with the 85th birthday of composer Stephen Sondheim, making it even that more special. So sophisticated; so dark; so difficult....

In general, when it comes to musicals, I almost always prefer Act 1: a fresh new musical world beckons. For me, though, even the best shows run low on energy in Act 2. "Sweeney Todd" is the exception. It just gets better and better!

Such wonderful songs!: "Green Finch and Linnet Bird"; "Kiss Me/Ladies in Their Sensitivites/Kiss Me Quartet"; "Pretty Women". Still, my favorite song of the show is "Johanna (Reprise)". By luck, in my capacity as Stage Manager and Stairs Bracer, I got to remain on stage as the song was sung. Wonderful!

I tried to find a suitable video on YouTube: the original Broadway recording is always good. Some interesting videos out there, including one I misheard the lyrics to:

"Witch!
A witch!
Smell that Sir?
An evil smell!
Ev'ry night at the Vespers Bell!
Smoke that comes from the Taco Bell!
C'iy on fire!
C'iy on fire!"