Impressions of the Presidential Debate

I listened to most of the first presidential debate of 2004 on my car's radio as I drove around Davis and Sacramento. My impression was similar to the impressions of others who felt Kerry won the day, but without video, the impression probably wasn't as vivid. Later, I caught some of the post-debate spin on CNN. I'm pleased how Kerry's good showing is amplifying in the great echo chamber of American public debate, assisted a little bit by right-thinking liberals everywhere on their blogs. It always amazed me how the directionless presidential debates of 2000 got spun diabolically in Bush's favor, and to Gore's detriment. Never again. We can play this spinning game too. Onward to victory!

DMTC won today at the Arts and Business Council of Sacramento's Prelude to the Season annual awards ceremony at the Doubletree Hotel. According to the Sacramento Bee:

Awards for Arts Management Excellence were given to the Mondavi Center for the Performing Arts at the University of California, Davis, (for groups with annual budgets over $125,000) and the Davis Musical Theatre Company (for organizations whose annual budgets are under $125,000)....The Individual Leadership award went to Tom Stallard of Yolo County, who helped rescue and restore the Woodland Opera House.


It was a great lunch - all the area's heavy-hitters were there - and one of DMTC's prizes is a free full-page ad in the Sacramento Bee, which is worth its weight in gold. Yippee!

Is this a bubble? Whatever it is, it's OK for homeowners who bought in 1998 (like me) and bad for everyone else. 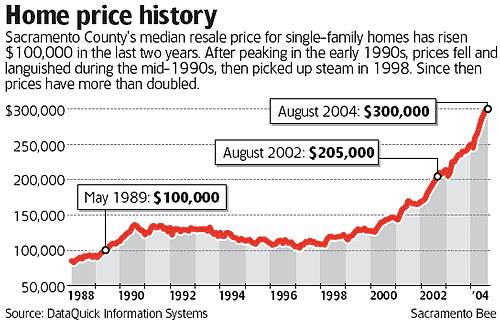 What's with the National Hurricane Center (NHC) and its lame conservative hurricane-path forecasts? They seem to think the best approach is to poll all the models and choose the result that's most in the middle. Model results diverge from each other not for any stochastic reason, however, but because some models are better than others. A better approach is to choose just the best models and use their results. Determining which models are better for particular applications takes a lot of experience, however.

NOGAPS did really well forecasting the paths of Ivan and Jeanne, but as good as it did, its results were well outside the consensus approach. It took an unconscionable amount of time for NHC, kicking and screaming, to finally recognize the other model results were crap. But it was obvious the results were crap at the time - I could see it, and any skilled hurricane meteorologist should have been able to see it as well. So, what gives?

Dwight and Linda near Tampa went hot-tubbing when Tropical Storm Jeanne's eye passed over their house. Power was off where they were for 26+ hours, but where they were, all considered, they thought Frances was a worse storm.

Just returned from SARTA's 2004 Elly Awards ceremony at Sacramento's Crest Theater, the only time all year when representatives from the various Sacramento-area theaters assemble in one place. Even though DMTC was up for only one award (Mike Jones, nominated for best male supporting actor), I wanted to go to observe and get any intelligence regarding why so many of our shows this year were apparently overlooked. A big comedown from just two years ago. What's not to like? That's what I wanted to find out.

Even though DMTC had no contingent there, the ceremony was technically sold out when I arrived. Despite the packed house, I was still able to get in. It's easy to forget just how many small theater groups there are in the area, particularly in the various high schools and small towns, and how new some of them are. In the past, SARTA has shown a fondness for new, small, innovative theater groups, and there is every sign those groups are proliferating. I sat behind a large and enthusiastic group from El Dorado Musical Theater. Shows my ignorance: I didn't even know they had such a group there! Plus El Dorado High School too! There are dangers of missing the bigger picture when one focuses too hard on just one theater company.

Much of the theatrical growth is in the eastern and southern suburbs of Sacramento (Sheldon High School, RCTC, Magic Circle, Folsom High School. Davis and Woodland, on Sacramento's north and west side, are growing too, so DMTC should be able to tap that energy too. Indeed, in the larger picture, the new theater can be seen as a natural response to economic and population growth. Artistic energy faithfully follows economic energy, as it ever has. Torpid backwaters rarely produce cutting-edge anything.

So, as far as I can tell, DMTC got short shrift this year because the number of awards and nominations is being outstripped by the number of people and groups involved in amateur theater. Competition is stiffening, and stiffening fast. There are entire cohorts of new, unfamiliar young people entering local theater. It was sobering just how few people I recognized at the ceremony (I said hello to Kathy Davi, Lora Kennedy, Amber & Laurent Lazard, Jason McDowell, and Erik Daniells, and saw a few more familiar faces, but it was still just a tiny minority of the 650+ people at the Crest Theater).

To compete, once the new theater is built, DMTC will have to focus harder on quality, perhaps specializing on some particular aspect (these days, Runaway Stage is focusing on light design, Woodland is focusing on set design, etc.) Also, I think we should get more involved in the SARTA process, perhaps by becoming award presenters (like Bob and Roe from Magic Circle did this year), or by becoming Elly judges, in order to improve DMTC brand recognition amongst all the new acting pool. Perhaps if Steve Isaacson looked as good as Bob Baxter in drag, that would help our name recognition too.

Here is Sacramento Bee's coverage, with a link to the list of winners.

Saturday, September 25th, musical theater veterans Amber Jean Moore and Laurent Lazard got married at St. John's Lutheran Church, 17th and L Street, in Sacramento. Starting from their home base at Runaway Stage Theater, Amber and Laurent branched out to other theaters, and they were on equally splendid relations with all of them, and so the wedding promised to be a perfectly ecumenical blend of musical harmony. On the other hand, there were natural hazards in putting half of Sacramento's divas and stage hounds under one roof, and there were natural rivalries among the various theaters. I preferred to think of it as the Montagues and Capulets and the Sopranos and the Corleones get together for an afternoon of whimsical entertainment.

I had to leave INterACT rehearsal early at the Broadway Playhouse theater in Fair Oaks, and so I was half an hour late to the ceremony. Not wanting to interrupt the ceremony, and determining from the audio being broadcast in the lobby that the ceremony was at a critical stage, I crept up the staircase into the choir loft and watched from up there, next to the pipe organ. There was excellent singing (of course), and candle-lighting and candle-snuffing: it was very pretty. At one point, the organist blew past me to get the organ going for the final procession (he had just seconds to get from the keyboard downstairs up to the organ).

At the reception later, some people described being disoriented by the absence of the "I Do" exchange in the ceremony (since I was late, I figured I had just missed it), but there was a wonderment in their voices, like they had been given an unexpected alternative script to a familiar reading, and they were trying to determine whether they liked it or not.

Afterwards, the guests idled outside on the front steps of the church as photographers besieged the wedding party inside. J.D. counted four theaters in attendance (Runaway Stage, Magic Circle, Chautauqua Playhouse, and DMTC). I half-expected the guests to spontaneously coalesce into Jets and Sharks: I knew Jeremiah had played Tony, and I'm sure there were a few good Marias in attendance too. Nevertheless, the atmosphere was happy and relaxed. It was good to see people who hadn't been around lately, such as Pheonix Vaughn and Jason Stevens (I think they're in LA these days).

The reception was held at the Newman Center near Sac State University. There were some unfamiliar appetizers on a table in the reception hall. One looked like a slurry stabilized into a cake, with green ovals dotting the top. I said, "well, it looks like mortar with pickles." The helpful man in the chef's hat said: "It's duck pate. It's French!" But of course! Why shouldn't Laurent, who is French, have French hors d'oeurves on his wedding day?

Dinner was delayed for a while, so there was some dancing, and much socializing. I met Gino Platina's parents, and gabbed with the DJ. Amber and Laurent looked fine. Among many others, Bob Baxter, producer of Runaway Stage, buzzed about.

Since Runaway garnered most of the Elly Award nominations for musical theater, in some sense, Bob is the current capo de tutti capi on the ever-shifting sands of Sacramento Valley amateur musical theater. Bob came over and put his hands on the shoulders of rival capo Steve Isaacson. No piano wire, though: Bob had in mind a test of Steve's endurance. No contest - Bob reduced Steve into a quivering mass of jelly by giving him an impromptu massage (Don't! Stop! Don't Stop!) These two made men of the musical theater world have their own inscrutable rituals that mere consiglieri such as myself can't understand.

After dinner, there was some excellent dancing - there were a few good dancers of West Coast Swing present. I had to leave to usher "Bye, Bye Birdie" at DMTC, so I missed the karaoke. According to Tev, who left a few minutes after I did, Laurent sang the first song: "Pretty Woman."

Email ThisBlogThis!Share to TwitterShare to FacebookShare to Pinterest
Links to this post
No Pleasure in Being Right

Well, NHC finally budged in their Jeanne forecast and western Florida too can join the misery.