On Wednesday in Phoenix Municipal Court, while all eyes were on the Jodi Arias murder trial, Arizona Attorney General Tom Horne pleaded no contest to leaving the scene of an accident, a misdemeanor, and agreed to pay a several hundred dollar fine.

As reported by KTVK, at the incident occurred in March 2012, while Horne was being followed by FBI agents conducting a campaign finance investigation. An FBI report released in October said the reason Horne didn't stop after the accident was because he was having an affair with Assistant Attorney General Carmen Chenal, who was in the car at the time.

This Is Why I Never Took Up Fishing

Necessary To Explain Things These Days

On Saturday, I was setting up to mow the front lawn, when two bicyclists rode past. One bicyclist turned to the other just at the moment they passed, and shouted, "I wonder what it's like to be a kid these days?"

Normally, these kinds of oldster questions strike me as silly. Growing up today is really not much different than it has ever been. Times change, but the changes are more superficial than people realize. Weird things that happen today were weird things when they happened years ago too. It's just that the oldsters didn't encounter them, or no longer remember them, so they just seem weird.

But certain things are more noticeable today than they were in the past. More common. So, some things have to be explained more carefully and clearly.

The reason I mention all this is because a Facebook conversation keeps coming back to the same subject. I guess "no" is not being interpreted as "no". When I say no, I mean I'm not interested. So, let's spell it out more clearly.

Sexting is a bad idea! One must be very careful. Pictures can be used for blackmail, shown to enemies, or for half a dozen other purposes you can't even imagine. And once on the Web, pictures are permanent too. Once you release them, they are someone else's toy. I've seen pictures I had no business seeing, and don't want to see anymore. It's a bad practice, because it enslaves you to anonymous strangers' whims. You could lose jobs and friendships to whims. I guess the first time I encountered anything like it was in 1982, before the Web.

So, let's change the subject.
Posted by Marc at 2:22 PM No comments:

Several weeks ago, Joe the Plumber paid me some money back. Yesterday, he hoped to borrow some back again. He proposed: "$40 for gas?" I sighed, and said yes. But I asked for a favor: Would he drive me home? I hadn't driven into work yesterday because I was facing an uncertain driving-competency test with the tooth-pulling and all, and needed a lift. So, he came to pick me up.

I pushed Bella the Dog out of the front seat and climbed into his van. There were cans and bottle and papers and tools everywhere - his 'home' needed a cleaning. Hard for me to see out the cracked windshield, and the seat belt wouldn't work. But the real problem was that the vehicle barely ran at all. It chugged. Unburned gasoline gave the exhaust an exhilarating hydrocarbon-rich odor. The van was misfiring terribly. "I need new injectors," he explained. "Repair guy ripped me off. I ran out out of transmission fluid too. It's supposed to take eleven gallons: I had just enough money for three gallons. In order to shift gears, I have to increase the engine rpm first, then take my foot off the accelerator, so the gear lever can shift." He illustrated just how hard that shifting process was.

I guess this transportation debility explains why I haven't seen much of him lately. So, we chugged to the ATM, got the cash, and chugged over to my house, where he dropped me off.
Posted by Marc at 2:00 PM No comments: 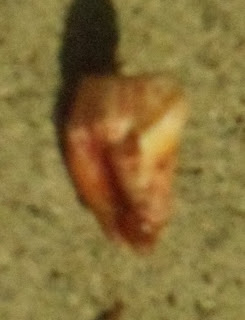 Trying to get a picture of the external resorption. The camera doesn't like to focus so closely. The shadow on the front part of the tooth shows where a sort-of tunnel was forming. It wasn't a cavity from tooth decay. It was a cavity from tooth death - external resorption. Trying to image that tunnel with X-Rays caused issues last week.  They took about ten X-rays.  I got about five years of hard radiation in five minutes, just to be sure they understood what they were seeing.

"Are you feeling pain?" I nodded yes. Can you feel your lips?" I nodded yes again. The contract dentist, a slight Asian woman who wasn't part of the usual staff but an itinerant tooth puller who came on Mondays, and her assistant, both looked perplexed. After all, they had shot my jaw full of Novocaine. Theoretically, I shouldn't be feeling much pain at all. Theoretically.

Interesting how tooth pulling is now a sub-specialty. The regular dentists, all women in this practice, are needed more for glad-handed interactions with the clients. Arranging for implants and inlays and the other expensive high-flying dental stuff. The nice part.  The brutal parts of dentistry are reserved for others.

I told a familiar story:  how I challenged my reluctant four-year-old sister to a boxing match when I was six years old (playing 'Fight of the Week', a program that used to be on TV when we were kids).  She popped me in the jaw, and that's how I lost my first tooth.  They liked that story.

So, it was a bit of an ordeal. Nice cracking sounds towards the end.  Like eating a crab.  Fortunately, there wasn't much post-operative pain at all. Because the contract dentist and her assistant knew what they were doing. They do it all the time and get lots of practice.

I likely won't get an implant. I don't sense the need - the molar isn't needed for cosmetic purposes - and it's quite expensive. But there is still a risk. The other teeth on the bottom may shift towards the void over time, and the molar above may grow into the void below because it no longer has opposition. But life is full of risks.

Despite good care, teeth aren't forever, especially when you are a 'bruxer', and grind your teeth at night.
Posted by Marc at 1:27 PM No comments:

Come on, George, what are you afraid of?:

A planned trip by Bush to speak at the Switzerland-based United Israel Appeal later this week has been canceled after several human rights groups called for Swiss authorities to arrest Bush and investigate him for authorizing torture. Bush has traveled widely since leaving office, but not to Europe, where there is a strong tradition of international prosecutions.

The Swiss group and Bush’s spokesman claim that it was threats of protest, not of legal action, that prompted the cancellation. But facing protests is nothing new for Bush. What was different about this trip was that groups including Amnesty International and the Center for Constitutional Rights argued that Switzerland, as a party to the UN Convention against Torture, is obligated to investigate Bush for potential prosecution.

On March 10th, Middlefield, Ohio police made what appeared to be a routine traffic stop of a man who had run a stop sign. But then James Gilkerson emerged from his stopped car firing 37 rounds from an AK-47 rifle. Amazingly the two officers in the cruiser sustained only relatively minor injuries and fired off 54 rounds of their own, eventually killing Gilkerson.

...Perhaps not surprisingly, in Gilkerson’s car police found eight 40-round magazines for the AK-47 and a bunch of militia and terrorist related literature.

...TPM Reader JL notes that the 7th slide in the slideshow shows what appears to be a course manual for the Fighting Rifle course taught by a Tennessee outfit called Tactical Response.

...Well, remember back not long after the Newtown massacre, a crazy gun guy down in Tennessee who was the CEO of a ‘tactical’ firearms training operation said he was “gonna start killing people” if President Obama issued an executive order on guns. Well, that was James Yeager, CEO of, yep, Tactical Response.

Why My Mother Told Me Not To Point

Saturday night, as usual, I was performing in "Oklahoma!" at DMTC, in Davis. While singing the title song, 'Oklahoma', and while we sing 'you're doing fine Oklahoma' we're supposed to point briefly at the audience. I zoned out - maybe concentrating on the song - and kept pointing at the audience. And pointing. When I came to, the shock of realization made me giggle through the rest of the song.

My stage partner Sara Wieringa is good with tactical shoves and tactile clues if I happen to forget stage blocking or dance steps, but pointing vacantly at audience members put her in a quandary, which she tried to address while remaining in character. I was pointing with my left arm and had my right arm linked with hers. She tried squeezing my arm to catch my attention, but I just squeezed her arm back more. She thought about reaching up and bringing my arm down, but it couldn't be done without attracting attention, since we were in the front row.

Well, what would a 1906 pre-statehood Oklahoma housewife do if her husband started pointing vacantly in public at strangers? She elected to let me be. Remember, I Peter 3: Wives, in the same way be submissive to your husbands so that, if any of them do not believe the word, they may be won over without words by the behavior of their wives.
Posted by Marc at 11:56 PM No comments: