The Sexes Are Different

Overhearing conversations in this sidewalk cafe, I sense a different tenor in the questions posed, depending on sex. Man to man: "Do you notice a difference drilling into regular steel vs. stainless steel?" Woman to man: "Do you have to be such a whore when I'm around?"
Posted by Marc at 3:43 PM No comments:

I wasn't sure what we'd find two blocks ahead. I heard 2 cat screeches, a thud, a barking dog, and then silence.

What we found wasn't an accident scene, but rather a small, loose terrier on the sidewalk. Bella was bucking wildly on the leash in order to play. The terrier was calculating just how much control I had of the leash in order to taunt Bella and stay just out of reach. We eventually found the owner of the terrier, who couldn't coax her dog away, and feared Bella might hurt Ryan (her terrier). So we walked to her house and Bucking Bella was admitted just inside the front door for a brief moment in order to separate the dogs with the door.

For a brief time Bella had a playmate. She thought that was fun!
Posted by Marc at 3:42 PM No comments:

The mystery about Donald Trump is that most of his positions aren't conservative positions at all, but liberal positions. He bangs the drum on various populist measures and complains about problems that it took years of hard work by conservatives to create. Who put the low tax rate on carried interest into the tax code that hedge fund people pay? Conservatives. Who starves infrastructure and veterans of needed funds? Conservatives. Even Trump's anti-immigration stance is shared by some liberal union people. Yet conservatives often stress that they want strict conservatives in elected office. So, what do conservatives want? To 'Make America Great' or Conservatism or some other melding of the two? It's all incoherent. No one would be more disappointed by a Trump presidency than conservatives. 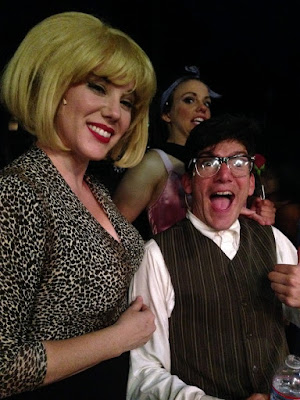 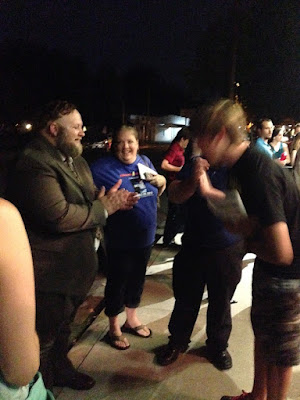 Mushnik (Patrick McCann).  Patrick did really well!  I remember him as a teen back in 2000 DMTC Evita Days. 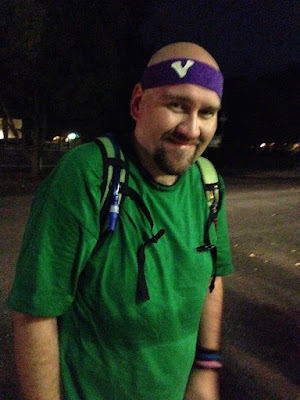 Jaye Vocque was on stage much of the time, but cleverly disguised as Audrey II!
Posted by Marc at 2:15 PM No comments:

But there is an interesting article in Nature regarding the vulnerability of certain cities to hurricanes, Tampa included.

[UPDATE: Here’s a better link via Salon.]
Posted by Marc at 1:20 PM No comments:

I went to go see Sacramento's own Greta Gerwig in her new movie "Mistress America" at the Tower Theater. I liked the movie, and was a bit surprised at its trajectory, with hints of depth. What I especially liked was the early, all-but-random, rapid-fire dialogue at Mamie Claire's 'party' (the scene just after the scene shown in this clip). I prize near-randomness on my blog, with my dog, and in life in general, and for a few minutes this movie is like fractal genius. Filming it must have been difficult and they must have worked months on writing the dialogue.


In Gerwig's 2012 movie, "Frances Ha", she returns to Sacramento. It's funny, I barely remember the Sac scenes in that movie. Someone recently said you could tell it was Sac because you could see the Big Red Rabbit in the airport, but I don't remember the Rabbit, which I suppose makes me a bad Sac booster.

Although the escalator here at 3:03 is a Sac escalator:


I bet I didn't clue in to the Big Red Rabbit because "Frances Ha" was a black-and-white film.

I was wearing my "Burque" T-Shirt, and surprised the popcorn clerk: he's from Santa Clara Pueblo, NM!

Greta Gerwig came through the ranks of Sacramento area community theater before heading off to college at Barnard. 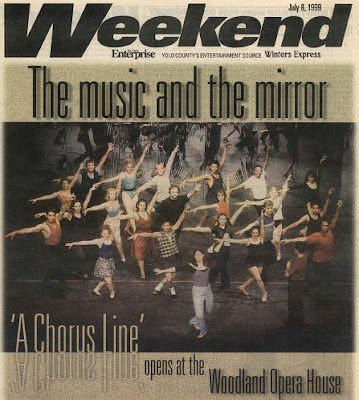 Left: Davis Enterprise Weekend cover from the summer of 1999, featuring the Woodland Opera House's cast of "A Chorus Line". Many of the cast had come from Solano Community College in Fairfield, but others were locals from Sacramento, Davis, or Woodland. Greta Gerwig is in the back row, in powder blue. I'm in the middle, in black. Folks whose names I still recall are: Michael Miiller, Aaron Clemens, Stephen Hatcher, Pam Kay Lourentzos, Jenny Stallard Lillge, Julianne Riordan, Stacey Arriaga, Angela Yee, Kathleen Reilley Dodd, Paul Jones, Pam Benjamin, and Peter Baldridge.
Posted by Marc at 10:57 PM No comments: