A few photos from Green Valley's "A Chorus Line" opening night (for this show, at Hiram Johnson High School). Everyone looked fabulous, particularly Christina Castro, Kris Farhood, Elio Gutierrez-Montoya, and Stephanie Hodson. Jenny Lillge looked great too. Loved Jacob Gutierrez-Montoya's choreography (with traces of "The Doorway"), except for the finale. I couldn't put my finger on the difficulty until Ron Cisneros said "I'm glad they did the traditional finale choreography." (I never much liked that traditional finale choreography. Indeed, there are some aspects of the show I've never much liked - it's a bit juvenile - but the concept was always a winner.)

There were some opening night glitches. Sound was a bit weak at times. 'Zach' was having some opening-night jitters. All stuff that will get hammered down as the run proceeds. 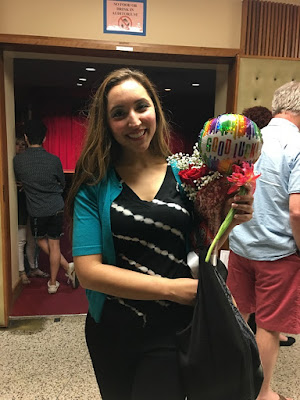 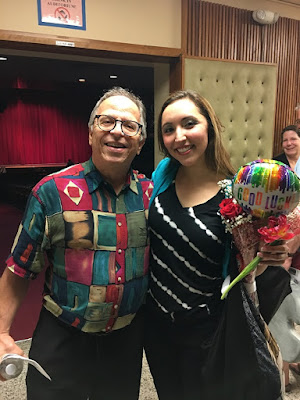 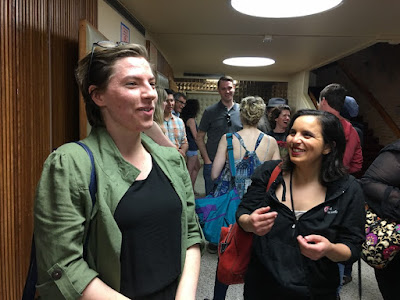 Ana Hansen was there opening night. She explained she's rehearsing for "Mamma Mia" at the Mountain Play in Marin County (opens in a little over a week). 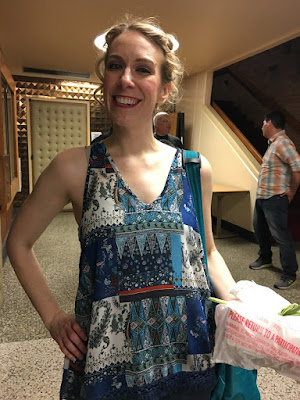 Stephanie Hodson as Judy.
Posted by Marc at 8:33 AM No comments:

Jennifer Rubin Takes on Hateful Culture of the Trumpies

But conservative columnist Jennifer Rubin needs to understand, this is what conservatives are, and have always been:

Kelly, like Sadler, was not speaking out of school. One could imagine President Trump saying very similar things in private or even in public. Kelly’s boss, who does not want black and brown people from “shithole” countries, would no doubt applaud Kelly’s comments. Trump has yet to apologize for ridiculing McCain’s status as a POW during the campaign. Fox News’s business model is built on promoting crackpot ideas and airing hateful rhetoric that feed the anger and resentment of its base. That means tearing down genuine heroes who challenge the Great Leader Trump. They are utterly comfortable voicing obnoxious slurs, revealing a stunning lack of human decency. They are superstars in the right-wing ecosystem, not in spite of their crass, bigoted views, but because of them.

The ensuing firestorm did force the Fox host interviewing McInerney to apologize and Fox to say it wouldn’t have McInerney back on. He might be excused for thinking his rhetoric, of a piece with so much of what airs on Fox, was entirely acceptable. Indeed, why invite on a birther if not to say outrageous things?

In short, not all of Trump’s followers and enablers are bad people, but in the Trump universe, bad people sure do flourish.

Beginning to look at Russian-Troll Facebook Ads from the 2016 election. Zipped files are here.
Posted by Marc at 1:08 PM No comments:

Keeping an Eye on Florida

Forecast still has a tropical storm in it, but it's delayed a bit: Friday May 25th - Saturday May 26th - a Memorial Day surprise. Projected path still hasn't settled down from one forecast to the next. Starts in the Caribbean and heads north. Path could easily include Tampa.
Posted by Marc at 11:42 AM No comments: 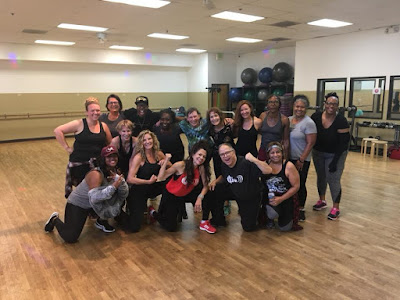 The two us with recent health challenges kneel in a fighting pose.
Posted by Marc at 11:40 AM No comments:

It’s funny what you remember from Facebook. Several years ago, Amber Jean Moore posted about not being able to sleep because of a Mockingbird outside her window that just wouldn’t shut up. Amber’s rage against nature made me smile.

Now, there’s a Mockingbird outside my window that just won’t shut up....
Posted by Marc at 11:36 AM No comments:

The two young salesmen at the door were desperate to sell me on getting DirecTV. They came with iPad in hand asking me for all my numbers, Social Security number too. Hope this isn't a scam. If it's a scam, it's an unusually well-done scam. Now, I used to have DirecTV, but abandoned it at least four years ago due to the cost, plus all the absurd bullshit that passes for news these days.

The reason the salesmen gave for this visit was as a customer-retention effort, given neighborhood Internet interruptions due to construction and with new, faster, fiber-optic cable now being available. Hmm.... Maybe plausible. I certainly have had lots of Internet interruptions on AT&T. I don't know about construction going on, but Xfinity and Comcast have been trying to grab my attention, with flyers in the mail, and especially when their technical people block my driveway with big trucks and are up on my utility pole after sunset. Customer-retention makes some sense, given the competition.

Still, what caught my attention was being to get DirecTV and Internet for about the same cost as getting Internet alone. I hate TV, but what's not to love about getting free TV? Plus being able to watch TV on the iPhone?

So, why are they giving me free TV?

There may be a tie-in with what's happening elsewhere:


The body isn’t even cold yet, but AT&T is wasting no time in rolling out new “features” that fly in the face of net neutrality. The company has expanded its “sponsored data” program to prepaid wireless customers, offering content companies the option to “sponsor” their data so that it doesn’t count against users’ caps.

This, in case you’re wondering, is what you find under the definition of “paid fast lanes” in the net neutrality false promises hall of fame.

As of right now, the only three services using AT&T’s sponsored data program are DirecTV, UVerse, and Fullscreen. By a huge coincidence, those are three video services owned by AT&T. “Now your plan includes sponsored data. This means, for example, that customers who have DirecTV or U-verse TV can now stream movies and shows … without it counting against their plan data,” AT&T told customers in a text message earlier today.

This flies directly in the face of a statement AT&T made just last year, when it was trying to persuade consumers that the FCC’s net neutrality repeal wouldn’t be the end of a free and open internet. “AT&T intends to operate its network the same way AT&T operates its network today: in an open and transparent manner. We will not block websites, we will not throttle or degrade internet traffic based on content, and we will not unfairly discriminate in our treatment of internet traffic,” executive Bob Quinn said at the time.

By any definition, offering paid fast lanes to companies constitutes “discriminating” against internet traffic. I’d say that only prioritizing traffic from AT&T-owned companies, or companies willing to pay up, constitutes unfair discrimination, but then again I’m not an AT&T lawyer.

The salesmen and I didn't talk about net neutrality. Instead, my effort to sign up was bollixed by an iPad upgrade not installed, and didn't succeed until the third time. Since they were on my doorstep for a long time, we started talking. They saw my "Breaking Bad" T-Shirt and talked about being fans of the TV show. I started expostulating on my theories regarding sets and filming locations. So, I went to go find a copy of my book. I couldn't find any except old copies, so I gave the old copies to them as gifts. They were pleased, and it made the tedium of waiting easier to endure.
Posted by Marc at 2:56 PM No comments:

Forecasts are suggesting next week will be rainy in Florida - south Florida especially.

The long-range GFS forecast suggests an early start to the hurricane season, with a tropical storm/hurricane in Florida's vicinity 12 days from now - Monday, 5/21.

Still, it would be a surprise, maybe unprecedented, to have a storm this early in the season. Hurricane season doesn't even start until June 1st.

So, hoping for a bad forecast.
Posted by Marc at 1:59 PM No comments: 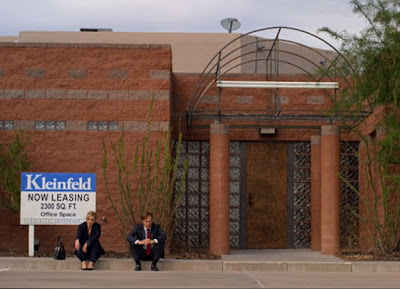 I'm plugging away on the draft of my new "Breaking Bad" book, to be released beside my fifth edition of "Guidebook to 'Breaking Bad' Filming Locations" in November, after Season 4 of "Better Call Saul" has aired.

I keep finding all kinds of mysteries and associations in "Breaking Bad" and "Better Call Saul." I really like this one....

Judging from the large sign out in front of their new Wexler-McGill law office, Jimmy and Kim do business with Kleinfeld Commercial Brokerage, which happens to be a real business in Albuquerque owned by a fellow named David Kleinfeld (“Better Call Saul,” Season 2, episode 8, ‘Fifi’). Kleinfeld signs are extraordinarily common in Albuquerque. You'll see five Kleinfeld signs in passing while driving to the supermarket. Thus, Kleinfeld signs attract no special attention - at all!

Nevertheless, as first pointed out to me by Eabha Conal (someone from outside Albuquerque, because Burqueños are too close to see it clearly), Kleinfeld is a reference to “Carlito’s Way,” a 1993 Brian de Palma gangster film starring Sean Penn as sleazy lawyer David Kleinfeld.

Another example of Vince Gilligan and company hiding a gem in plain sight!
Posted by Marc at 10:24 PM No comments:

These Mexican Free-Tail Bats are known for their big emergence displays in summer. I thought it was too early to expect one yesterday, but I was wrong! I got all kinds of ultrasonic bat recordings too. The supporting literature says the recordings are particularly unreliable during roost emergences, and indeed, the recording waveforms looked like static when a zillion bats appeared at once. Still the recordings I got are robust, with tons of bat signals.

I almost left too early and missed the emergence of the bats. It was amazing when it came! There were a couple of people from Concord nearby. As I walked away, the woman bid me stop. "Can you see the bats flying around under there?" she said. I thought she was nuts at first. It was more than thirty seconds before I finally saw movement. The mass emergence started less than a minute after that.

Next time, I'd like to be in a position to see the bats come out of their homes in the expansion joints under the I-80 freeway. And I wonder about all the solitary bats of other species left behind. 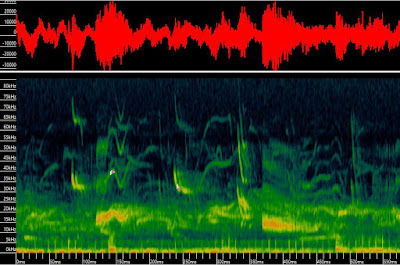 I like playing the bat recordings at 1/16 speed. Makes them sound like mysterious monkeys. This recording is labeled Canyon Bat, but since it was just a few minutes before the mass emergence, there are lots of other bats here too, and all very loud.
Posted by Marc at 10:17 PM No comments:

May the Third with Mayzie La Bird! Fun time. Lots of potatoes, and other food. I led the Yopp contest. Ella won for ages 12 and under, and Tate for the older crowd. My understanding is that DMTC got $23,500, plus an additional $3,000 in offline donations. 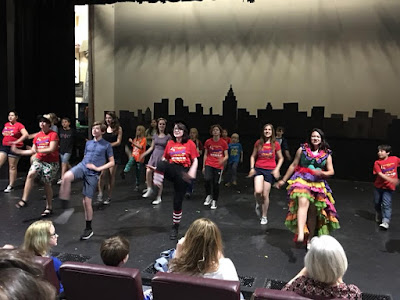 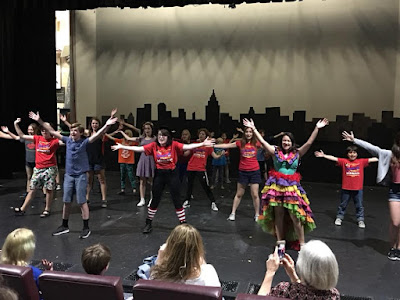 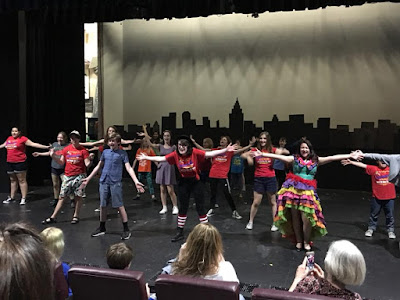 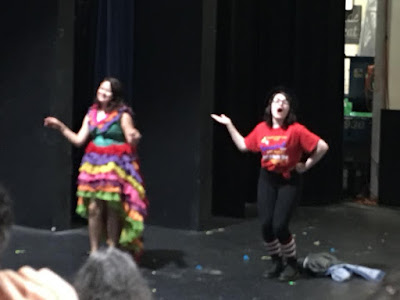 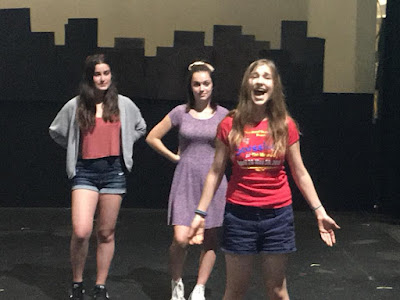 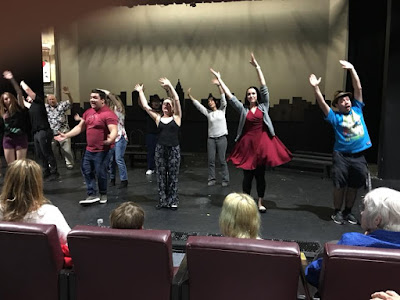 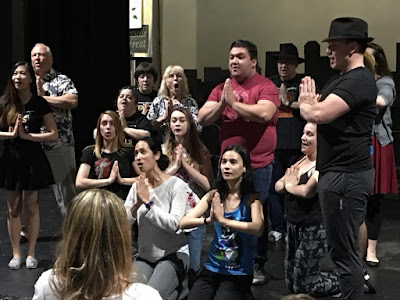 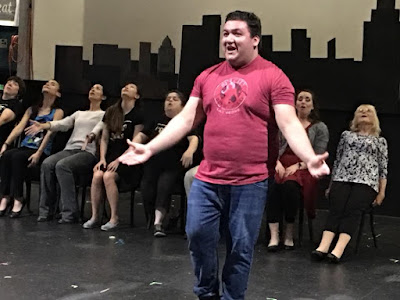 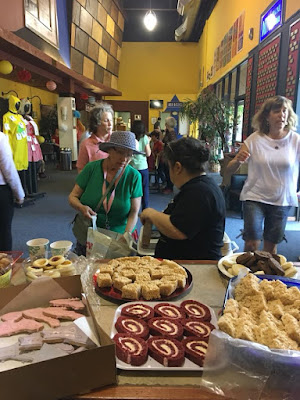 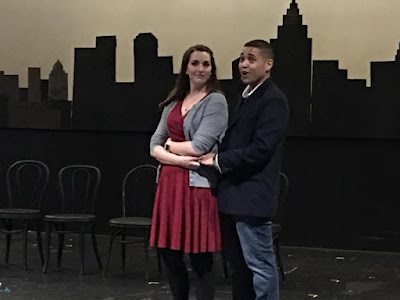 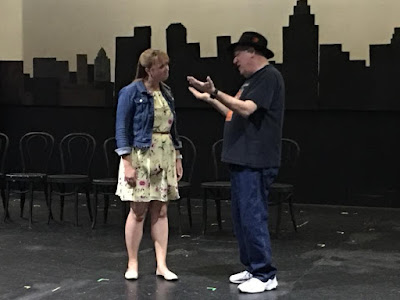 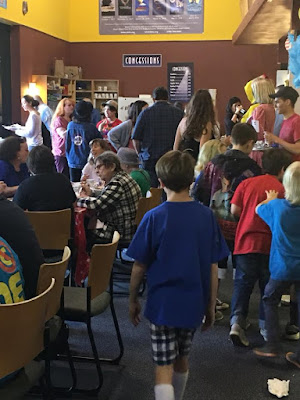 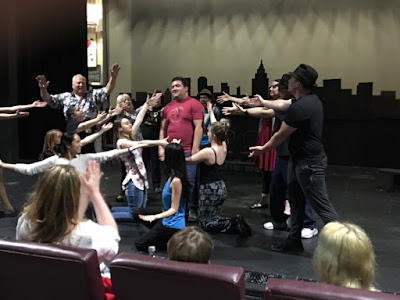 Electronica, with fish (the crabs at 8:14 are amazing).

I'm guessing it's a mashup of BBC nature video with Underworld's House style. According to Wikipedia, the music dates to 1994. I love the music, and I especially like the hyperfocused crabs. Not sure what kind of crab they are - not the red crabs of Christmas Island, nor the Cuban crabs: