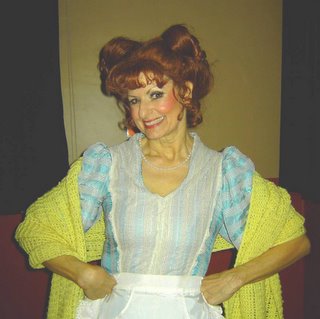 
Saturday night, I finally caught Runaway Stage's "Sweeney Todd," starring Ray Fisher as Sweeney Todd, and Ruth Phillips as Mrs. Lovett (their last performance was this afternoon). An excellent show overall, with strong performances by Margaret Hollinbeck as the Beggar Woman, Craig Howard as Pirelli, and Kevin Caravalho as Tobias.

In most musicals, I much prefer Act I to Act II. In Act I, you are exposed some exotic new locale, fresh and happy people, and novel circumstances. The tedious stuff, like wrapping up unsatisfactory romances and burying the dead, is usually left to Act II. No doubt because "Sweeney Todd" is a thriller, it is one of the few, rare musicals where Act II is more interesting than Act I.

For years, DMTC tended to consider "Sweeney Todd" as a company specialty, since no one else in the area would produce this dark musical: it's good to see RSP try their hand. I was part of the ensemble in DMTC's 2002 show, and there were interesting deviations between DMTC's 2002 show and RSP's version. At least two people in the Saturday night audience had also been in DMTC's 2002 version: Lenore Sebastian (Mrs. Lovett) and Richard Spierto (Judge Turpin).

As usual, RSP miked their actors, which was a good decision here: the rapid-fire dialogue could be understood despite the English accents. At DMTC in 2002, I suspect we were sometimes unable to convey our dialogue across clearly.

Judge Turpin's disturbing self-flagellation song was omitted from RSP's version. The song doesn't add that much by itself, except to creep people out further, but by and large, I support keeping any show's integrity by keeping all the songs. People act very strangely to some songs. One friend described how she and a friend had had a shock revelation upon seeing and hearing Judge Turpin's song in DMTC's version: the twisted Judge reminded them of a close mutual acquaintance, and despite the hideous nature of the song, they were reduced to hysterical fits of amused laughter.

One oversight: as a friend pointed out, RSP tended to de-emphasize the importance of Mrs. Lovett cadging not only Pirelli's money, but the purse as well, from Pirelli's lifeless body. The sudden revelation of the purse's existence triggers a cascade of events later on in the show, and emphasis on the purse's theft should have been emphasized as much as possible.

It was awesome how well Kevin Caravalho seized the spotlight in the final scene. What a fine actor he is! Joel Porter made a fine (meaning a bad) Judge Turpin, and Chris Scarberry was smooth and evil as Beadle Bamford.

An interesting thing began to happen as I listened to Sweeney expound upon his ugly philosophy - he began to persuade me that murder was not only a logical reaction to life's travails, but actually the best overall path in life. It's funny how musicals grab your emotions and play with them. It's a good thing that Sweeney overreaches: otherwise, we might all hurtle over the precipice with him. 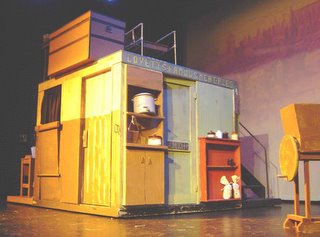