La Niña, And Where The Rain's Been This Month 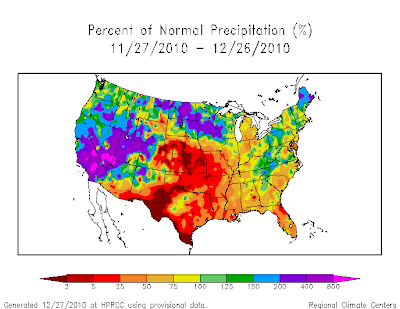 I always like these sorts of maps. The Australian Bureau of Meteorology produces real nice maps (under Climate Information), and it looks like we are finally catching up with good presentational technology too.

This map shows the percent of normal precipitation for the last month in the United States. Living in California, I am under the impression the entire world is drowning, but that is not true. You can clearly see the places where the rainfall plume from the Pacific has visited the last month, and the places it has shunned. Indeed, you can draw lines from Yuma, AZ to Albuquerque, NM; then north to Bozeman, MT, along the Rocky Mountains, then across to Chicago, IL, and that pretty much defines those areas. Places like the Southern Great Plains, Texas, and the lower Rio Grande Valley look they are in rain exile at the moment. That's La Niña for you!

And speaking about La Niña, how is she doing? 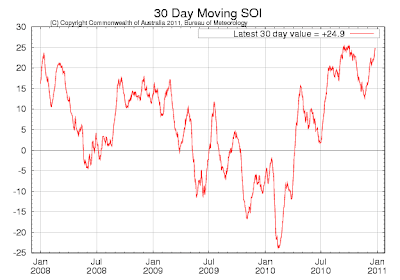 Wow, the Southern Oscillation Index (SOI) is above 20! That is a full-blown, full-on, no-holds-barred La Niña state, for sure, no doubt about it!

And where are the waters cooler than normal? Along the equator, of course!

It's as if the air flowing into the Southwest, from the southwest, retains a memory of where it's been over the Pacific waters, probably carried along with the air in the form of humidity, and it affects the amount of precipitation that can be wrung from the air as it passes over the Southwestern mountains. In meteorological terms, 'fetch' is important (the distance the air passes over an area), and the fetch here spans the entire width of the Pacific Ocean! Actually, given all the variables in play, I'm surprised the effect seems to be so distinct and so apparent, particularly since the equatorial air is still warmer and more humid than the mid-latitude air. But that's the way it looks! I'm no climatologist, just your average meteorologist, but it sure looks like a distinct signal!

At nine-months old, this La Niña is getting pretty long-in-the-tooth by now. When will her brother, El Niño, take over? It may be a while yet - she is showing little sign of weakness just yet!
Posted by Marc at 1:12 PM