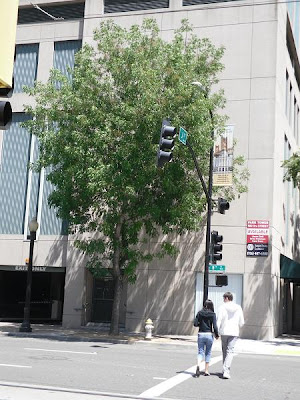 Here is a picture of the tree at 8th & J Street (mentioned in a previous blogpost) before which I saw a man kneeling in what appeared to be a religious ceremony - Druid? Buddhist? Meth Hallucination? - of some sort.

To all appearances, it seems to be an ordinary, urban shade tree.

Nevertheless, one can't be too careful. As John mentioned in comments, such unusual conduct could signify terrorist intentions to which the tree was privy. So, I made a citizen's arrest, and read the tree its Miranda warning:

Predictably, the tree clammed up and said nothing. What's worse, since the tree grows in the bail bonds district of Sacramento, and since a bail bondsman was just around the corner, the tree never even entered jail, but posted a few green leaves and remains free with its other fellow urban shade trees, in mute, flagrant defiance.
Posted by Marc at 4:04 PM