What Does He Mean "Harmless"? 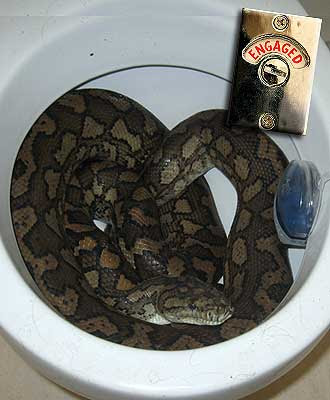 From the Townsville, QLD, Bulletin. Just your typical Australian menace!

These snakes are not poisonous, so, in that sense, they are harmless, but they are thoroughly ill-tempered and have nasty, bacteria-covered fangs, and you don't want them anywhere near your nether regions (although, it is true, I did touch one when I realized it was too cold for it to harm me, but at least I didn't tempt him by waving my nether regions at him):

In a scene only embodied in many peoples' worst nightmare, Mr Eves came face to scaled snout with the 2.7m carpet python during a night-time trip to his North Ward cottage's bathroom.

''I saw a dark shape in the toilet, so I turned on the light to check what it was and there was the snake sitting quite happily in the bottom of the bowl.

''I wasn't scared because I knew it was harmless.

''It's one thing to have a frog in the toilet, but not a massive python.''

...''It would have been a terrible thing to have gone to take a pee in the dark at 2am and find it there,'' Mr Eves said.

Attending snake wrangler Brian West said it had most likely used the city's sewer system to find its way into the Mr Eve's bathroom. He said carpet pythons were common in North Ward, however, the toilet specimen was ''unusually large''.

''Most people don't understand that the sewerage system is full of air, not water,'' Mr West said.

''There are also plenty of rats down there and it makes a pretty ideal environment for the snakes.''

The snake was released in bushland in accordance with Queensland Parks and Wildlife Service guidelines, Mr West said.