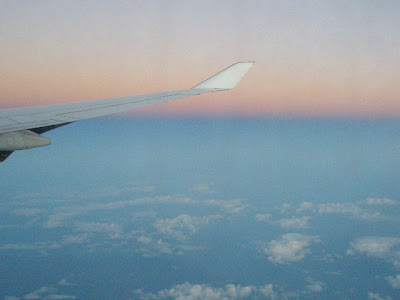 The Flight Across The Pacific (draft)


Left: In the dawn, a very vivid haze layer was present above us (I had guessed at first at 60,000 feet). Then, I realized it was probably the tropopause, separating stratified air above from aerosol-laden air below.

Dinner was first up, at midnight CA time, as soon as the Boeing 747-400 cleared San Bruno Hill and reached cruising altitude heading SW across the water. The food was good (meat loaf, corn, mashed potatoes and a brownie), but I was famished, and it wasn't enough.

The on-board movie was "Mamma Mia!" starring Meryl Streep. Great! I wanted to see this! Except the conditions were adverse for a musical - the deep turbine whine of the engines drowned out almost every song. Slow plot development seemed to kill my interest, and my suspicions obad singing couldn't be verified over the roar. Sigh.

The aircraft flew over one Fijian island (Tana?) and passed just south of another (Lifou), and clipped off the southern tail of New Caledonia..... 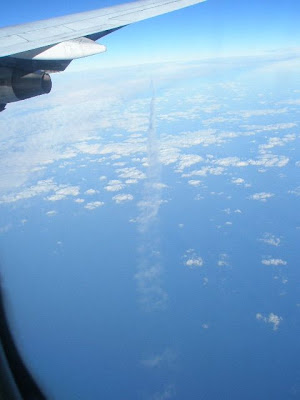 Left: East of Australia, a contrail of an aircraft below ours (heading from Brisbane to Auckland, or vice versa?) 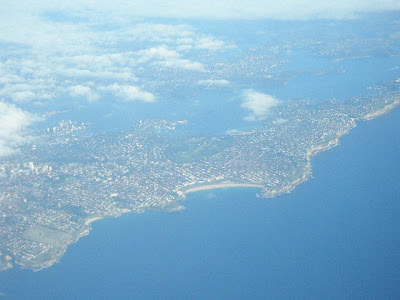 Left: The city of Sydney, NSW, AU in the morning light.


Then, suddenly, we were near Sydney and the crew frantically tried to fling breakfast out to everyone before we landed. As I pondered whether or not I would get OJ before we hit the tarmac, a stewardess sprinted down the aisle on some errand, encountered a dallying child, and expertly brushed him aside with "Sorry-sweetie-I've-got-to-get-past-you!"

Distracted, Mama said, "those are clouds," before apologizing for the racket.

Looking out the window, I thought I could see the Australian coast in the distance, but it was still very indistinct and almost lost in the haze and clouds. That "blue thing out there" I think they call the Pacific Ocean....
Posted by Marc at 9:14 PM