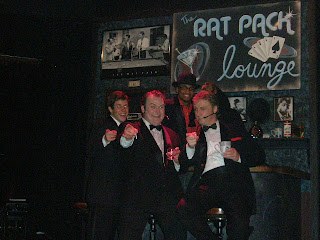 
Went with the DMTC crowd to see "Heaven Help Us!" This was the first time I've visited the new Garbeau's, under the management of Mark Ferreira, who, interestingly enough, recently got a plug in the Wall Street Journal:

Mark was very congenial and welcoming and eager to promote his new jazz revue night (most Thursdays, with the exception of when tech weeks occur for shows opening that weekend). The crowd look plusher, more free-spending than what I remember of Garbeau's crowds in the past, so it looks like things are off to an excellent start!

The Rat Pack's songs were always highly-variable in nature: some vapid and forgettable; some others, timeless works of art. Both types were found in this musical, with many of the vapid songs in Act I, and the timeless ones predominating in the 'Big Show' portion of the musical, in Act II.

When I was young, it was cool and hip to run down the Rat Pack's work. By the late 60's, they had overstayed their welcome in show biz, to some extent. Yet even then, they did much fine work, which can be appreciated better in retrospect; for example, watching reruns of Dean Martin's late 60's comedy variety show. No one in the business had better comedic timing! I've even heard rumors that, despite his reputation, Dean Martin's lush schtick was entirely an act, that he was a teetotaler (don't know if it's true). Watching him and Goldie Hawn was always a trip!

I am happy that Troy Thomas also has excellent comedic timing. It was fun to watch his rendition of Dean Martin.

Sequence Rashad "Keiu" Grisby played Sammy Davis, Jr. Wonderful voice! He was a little measured with the dancing, not venturing into Davis' trademark tap, but rather moving tautly through the smoky cool of 'Mr. Bojangles.' Even though Keiu is from Sacramento, he teaches dance at the Applegate Dance Studio in Davis.

Nic Candito played Vic, owner of 'The Rat Pack Lounge', whose emotional crisis brings the Rat Pack back to Earth. In some ways, Nic has the hardest acting challenge of the show, having to be alternately depressed and vibrant.

Lindsay Grimes played Angie, the only 'tomato' of the bunch. I'm a big fan of hers, and she does have excellent moments - especially with the song 'I Love Being Here With You' in Act II - but the musical doesn't have her center stage quite as much as she should. The play was written to focus on the Rat Pack, at the expense of tomatoes.

In reality, of course, the Rat Pack could be exceedingly solicitous and helpful to women singers. I recently heard an interview (broadcast together with Latino news) with the Mexican/American singer from El Paso, Vicki Carr, who discussed her improbable rise in show business, starting off with a hit song Down Under - folks there thought she was Australian - then catching the attention of Frank Sinatra by effortlessly shifting from English to Spanish, in song. Dean Martin had the highest praise for her, not only calling her the 'best girl singer in the business' but also 'it's so good to see a nice Italian girl make it in the business!'

Excellent performances on the part of everyone!
Posted by Marc at 1:46 AM