It's An Exaggerated Forecast, But Not By That Much

Areas around grass valley could experience upwards of 30-40" of rain this coming week. To put that in perspective, that's more than an ENTIRE year's worth of rainfall for Seattle. San Francisco could receive anywhere between 8-10" on top of already saturated soils (which is about 40% of an entire year's worth of rain).

Well this forecast is exaggerated a bit. Nevertheless, the amount of rain will be of flooding concern, mostly because it will rain six days straight, Saturday morning through Thursday afternoon, with almost no breaks at all. Around Grass Valley, rainfall amounts will be 10-11 inches, which is more than enough to flood communities, wash out bridges, and ruin roads. It's been so long since we've had one of these I'd almost forgotten what they look like. You read about them in musty old meteorological journals. Almost like they are describing a different planet. 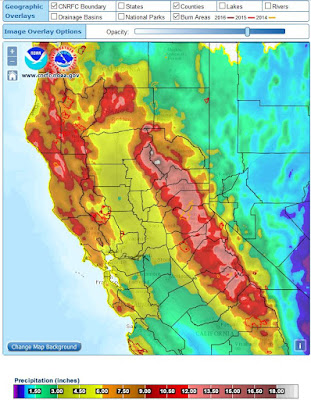 I've been playing with the maps at the CNFRC. Here is their 6-day precipitation map. 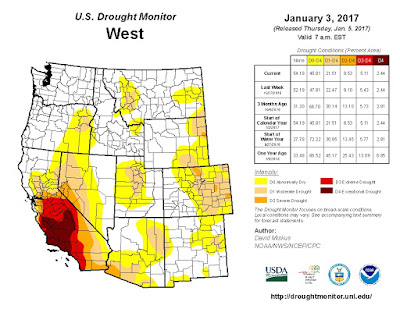 By next weekend I'm sure it will seem a point of amusement, as we struggle to stay afloat while washing away to the sea, but we are still in a state of severe drought here in Sacramento County. Things have improved from the hallucinatory nightmare of the last five years, but Southern California particularly is still locked in drought.
Posted by Marc at 4:03 PM