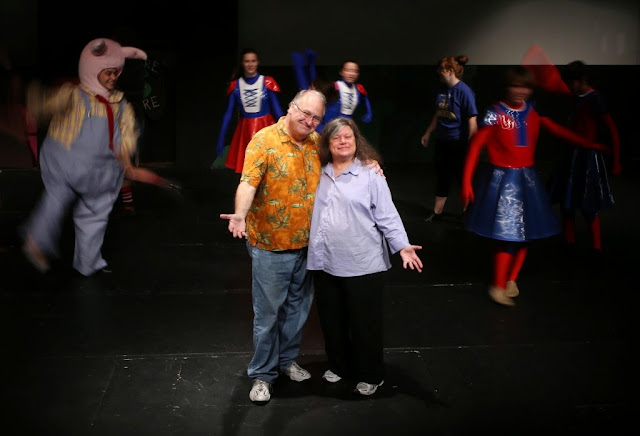 Link to DMTC for tickets:


The gala anniversary evening, at only $15 per ticket, will include hors d’oeuvres and a light dinner catered by Symposium Restaurant, followed by an evening of musical theater songs and highlights from dozens of productions that have been offered by DMTC over the years.

“I found people who performed from the beginning of the company,” says Jan, “so it will start off with ‘Oklahoma’ in 1987. Joe Anthony is coming back to perform ‘Oh what a Beautiful Morning.’ I picked selected songs from different decades. Mary Young is going to do ‘Everything’s Coming Up Roses’ from ‘Gypsy.’ Jay Joseph lives in Las Vegas and he’s coming back to sing ‘Buddy’s Blues’ from ‘Follies.’ The pièce de resistance of the evening is going to be Ben Bruening’s half hour movie tracing our history from the very beginning to now.”

...Statistics show that many community theaters which get off the ground and achieve some sort of success generally begin to peter out around 30. The founding members start to get older and can’t do what they did 30 years before, the younger members don’t have the dedication. Ultimately they call it quits, throw a big party to celebrate a long and productive life.

At 30, the Davis Musical Theater is just hitting its stride. Last year their house was amazingly 91% full and they expect to equal or surpass that this year. The company appears to be healthier than ever with exciting plans for the future.

...“There’s a real sense of family about the group,” says actress Dannette Vasser, who joined in 1997. “There’s not the backstage drama that you sometimes find in other theater groups. It’s a very comfortable place to be. Everybody gets along and a lot of that is due to the atmosphere Jan and Steve foster. They’ve created this to be a family place, where all different members of the community can work together to put on a show.”

“I consider DMTC my musical theater home,” says Mary Young, who has been with the company since she followed choreographer Ron Cisneros to Davis and performed Lady Thiang in the company’s second show, “The King and I.”.

...Young’s daughter Wendy was in the fourth grade when her mother joined the company, and she literally grew up with DMTC. “She was one of the children in 'King and I,'” Young said, “and I remember washing black hair dye out of her blond hair.”

Young has had an opportunity to perform with not only her daughter but also her grandchildren on the DMTC stage. In fact, the upcoming “Shrek” will feature 3 generations of Youngs. “I haven’t been able to perform with all three of my grandchildren,” she says, “But it’s on my bucket list.”

...Jen Nachmanoff is a mom who came to DMTC because her daughter Sophia wanted to perform. ”I’m a ceramic artist and have learned how to paint here at the theater, so I’m now a painter too. I didn’t know how to paint before I came here, but I’ve learned on the job. So I help with the scenic artistry. We find out we can do things we never knew we could do.”

...One thing that separates DMTC from many theater companies is it has been and remains an all-volunteer organization, and everyone works on everything. Actors know when they audition that they will be expected to help build sets or help in some other way.

“Except for the piano player we’re still all volunteer,” said Jan proudly. “We have the best volunteers around. People love it here. They’re here because they want to be here. It’s not a paid job. I always say we must be doing something right.”

...Henderson loves the DMTC family. “I don’t like to be with just old people. I like the diversity of age, I get to know what’s going on in the world. I’m not the retirement home kind of person.”