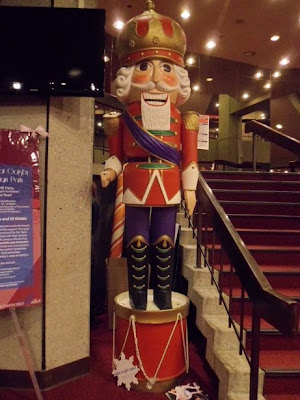 After Junie B. Jones, I returned home and marveled at just how much rain had fallen. I checked the basement for water and put a meal into the microwave. I turned on the TV and noticed the San Francisco Ballet's 'Nutcracker' was on one of the cable channels.

Then my blood went to ice. I had forgotten! I had a ticket for Sacramento Ballet's 'Nutcracker' that very afternoon, at 5 p.m.! I got the ticket from co-worker Craig, whose daughter Viktoria had been among the dancers last weekend. What time was it? 4:40 p.m.? I could still make it to the performance, but I had to leave IMMEDIATELY! So I abandoned the meal in the microwave, grabbed my clothes (still saturated in squirrel dust) and headed to work, where the ticket resided on my desk. Then I practically ran to the theater!

Great show! Ballet is the best art form, ever, and ballet on the grand scale is the bestest of all!

Very little in the way of errors or mistakes.

Christopher Nachtrab and Alexandra Cunningham were the Snow Queen and King.

Saw familiar names in the program, but I couldn't identify them from seat M31. Since the casts are doubled and tripled, it's possible they weren't performing on Sunday evening: Campbell Salmon, Paige Almendariz, and in particular, Brittney Almendariz.

Not looking forward to the microwaved dinner now. Maybe I should eat out?


Here is the promo for last year's Nutcracker (probably taped in 2010), but similar to this year's version: