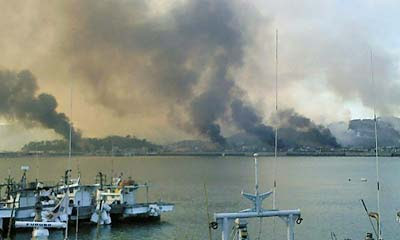 The always-unpredictable North Koreans decide they can get more through intimidation:

North Korea on Tuesday fired dozens of artillery rounds onto a populated South Korean island, apparently causing numerous casualties after Pyongyang claimed Seoul was readying for "an invasion," according to media reports here.

South Korean President Lee Myung-bak called an emergency session of his national security council in an underground bunker at the presidential residence late Tuesday to devise a response to the attack, which occurred near the disputed western border between north and south.

The South Korean military was placed on its highest alert with fighter jets sent into the air, after officials confirmed that one marine was killed and three others "severely" wounded, according to Seoul television reports. Ten soldiers suffered minor injuries and two civilians were among the casualties.

...The South Korean military was conducting drills near Yeonpyeong island when the North opened fire about 2:30 p.m. Seoul time, officials said. Pyongyang had earlier sent letters to Seoul that it considered the exercises "preparation for an invasion," which South Korea denied, officials said.

Lee said he was trying to prevent the exchange of artillery fire between North and South Korea from escalating into a greater conflict, Yonhap news reported.