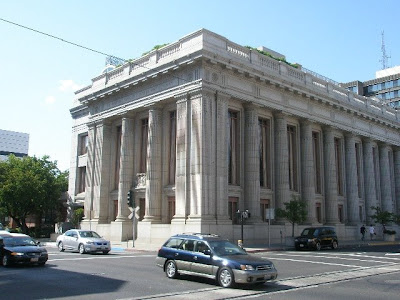 Left: The National Bank Of D. O. Mills, at the northwestern corner of 7th and J Streets, in downtown Sacramento.

Waiting at First Northern Bank for the shuttle ride from Saturn (the auto dealership, not some alien civilization) I began wondering, what is that big imposing building across the intersection at 7th & J? It certainly looked solid and stable, but I had never heard of D. O. Mills.


Brief history:
Darius Ogden Mills, founded the bank around 1849. A branch bank was opened in Columbia, Tuolumne County, California in 1850, which was transferred to other banking interests in 1859. In 1872 the bank became the National Gold Bank of D. O. Mills & Company. It remained under this title until October 29, 1925, when it was merged with the California National Bank of Sacramento. 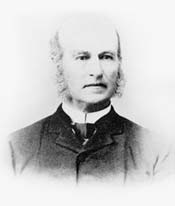 Brief biography:
Darius Ogden Mills, born September 5, 1825, in North Salem, Westchester County, New York, was the son of James and Hannah Mills, both descendants of early American stock. In 1840, Darius Mills started a bank, the National Gold Bank of D.O. Mills & Company, which has the distinction of being the first bank west of the Rockies and later helped to finance the construction of the Southern Pacific Railroad. The bank would later merge with the California National Bank; and in 1864, upon moving to San Francisco; Mills helped form and become president of the Bank of California.

One of the largest banks in California in the 1850s was started by D.O. Mills, a young New York bank employee who came to California to mine gold. Soon tiring of mining, he opened a mercantile establishment in Sacramento. Mills began storing gold for the miners, and later began buying gold and issuing notes that circulated as money. Within a few years he changed the sign on his building from "store" to "bank." The Bank of D.O. Mills survived into the 1920s. Merchants started many early western banks in just this manner, since the lack of regulation or enforcement meant that potential depositors needed the security of a trusted, widely respected individual. A previous business often was the route to this trust.

Although the character of the individuals in control was of foremost importance, housing the bank in a solid structure also reassured customers. Because depositors worried about "wildcat banks" which accepted deposits, then relocated far away to discourage withdrawals, it was hard to gather deposits without proof of stability. So the bank was often the most solid structure in town. Although there are a few spectacular instances of bankers leaving town with deposits, the system generally worked extremely well with minimal regulation. 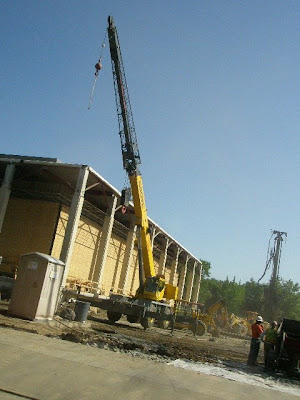 Change continues to roil Sacramento and vicinity, and we too will someday enter the pages of history with our various structures. Someday in the remote future, someone in Davis will be perplexed by a theater associated with the name "DMTC" and wonder what that was all about....
Posted by Marc at 1:23 PM