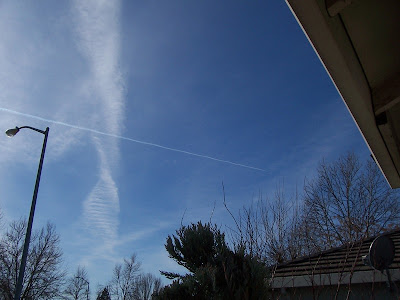 DNA Helix In The Sky: A Twisted Contrail!

Left: An aging contrail appears to be twisted into a helix over the town of Dixon, CA. Looking south, February 11, approximately 10:34 a.m. PST.

Last Monday, Traci Sotuela, who lives in Dixon, CA, took some very interesting pictures of a cloud, and wanted help from a Sacramento-area meteorologist in interpreting their meaning. Through MySpace, she was able to reach me and ask for my opinion.

The cloud in Traci's series of photos fancifully resembles "Atmospheric DNA": a twisted helix reminiscent of genetic material. Really striking! But what kind of cloud is it?

The cloud appears to have been an aging contrail (short for condensation trail), of the sort that aircraft at high altitudes often leave behind as they cruise along. But it's not often that you see a twisted contrail.

The absence of twisted contrails in the meteorological literature is all the more remarkable considering just how common contrails are in the atmosphere, and how many hundreds of millions of people see them every week as they go about their daily tasks. So, Traci managed to capture on camera what appears to be a rare event. These photos are quite special, maybe even unique curiosities. Plus, they are pretty.....

I forwarded the two photos posted here to a climatologist friend of mine, a meteorology professor at San Jose State University (SJSU) named Jerry Steffens. Jerry knows quite a bit about dynamic meteorology, the particular field of study that would be the most-useful in explaining this phenomenon. In turn, Jerry shared the photos with the faculty at SJSU.

My friend Jerry first responded with just a brief comment:

That's a real interesting suggestion. The rarity of the event may be explained by the rarity of button-down pilots doing barrel rolls outside an air show. Sometimes the simplest explanation is the correct one: the contrail appears to roll because the pilot may have done a barrel roll in flight. It's odd - I don't know why a pilot would do that, except for fun.

I wondered where this picture was taken, until I went outside about 3pm. It was here. I saw some very interesting contrails.

Since O'Shaughnessy was writing two days after the event, it suggests that, provided rolling turbulence was the source, that the conditions that had led to Traci's observations could have also persisted longer through the week, allowing even more twisted contrails to appear over Northern California. 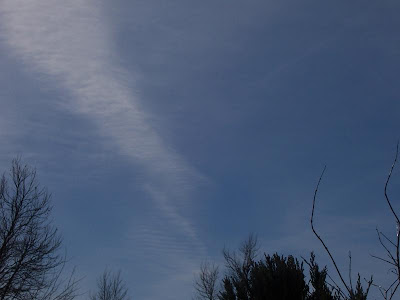 Left: This photo, taken 15 minutes after the first photos, shows the entire contrail having moved away from the photographer and to the southwest, indicating that winds at the contrail level were generally from the northeast and not precisely aligned with the axis of the contrail, which is more north-south in orientation. The contrail has been offset into two distinct segments, evidence of shear in the northeasterly winds.

Traci has since posted photos taken 15 minutes after the first set of photos. This set of photos show the dissipated cloud having been offset into two distinct segments. In my mind, that offset clinches the argument that it was "rolling turbulence" that caused the twisting contrail. If a barrel roll had been responsible, no offset would have occurred. Rolling turbulence appears likely to have been the cause for the pretty display. 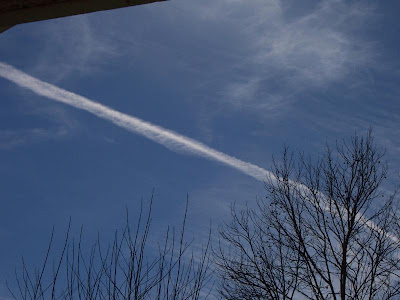 Left: Traci also captured another contrail that appears to be in the process of twisting. Photo taken on February 14th.

Perusing the SJSU meteorology website, I notice that there seemed to have been a region of horizontal shear in the northerly 250 mb wind flow across northern CA on the morning of Feb. 11th (Valid 080211 1800Z - 10 a.m. on Feb. 11th). Winds at 250 mb are indicated to be from the northeast over northern California.

Northerly wind speeds may have been quite a bit greater over the Sierras and the Great Basin than over the Coastal Range.

To explain, for meteorologists, time is expressed in Greenwich Mean Time (GMT): the time in London, England, which is eight hours ahead of us. They call the time "Zulu", or "Z" for short.

The National Weather Service takes soundings at Oakland, CA, and also at Medford, OR, and Reno, NV: the three closest sites.

The height of the cirrus cloud deck may be suggested by the evening sounding for Oakland, CA. There is an inversion about 12,000 meters, a little above where airliners and other large jet aircraft typically cruise on long-distance flights. With a sounding like this, aircraft at these heights would likely leave a contrail.

It's not clear whether the rolling turbulence was generated by the shear in wind direction at the inversion, or the change in wind speed with height just below the inversion.

I prefer the second explanation, that the twist was generated by a change in wind speed with height just below the inversion, with higher wind speeds just below the inversion. If conditions at Dixon at 10:35 a.m. were the same as indicated above for Oakland at 4 p.m., then wind direction shear alone should have made the contrail rotate in the opposite direction than the photographs suggest it did. Nevertheless, there is no assurance the Oakland representation is correct for Dixon, so explanations are speculative at this point. 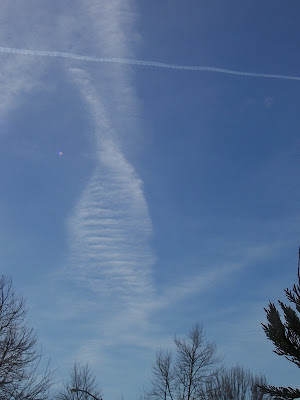 Left: Close-up of the aging contrail. A bright, erratic dot of unknown origin appears on the left side of the photo. February 11, approximately 10:35 a.m. PST.

Traci also photographed what appeared to be a dot in the sky, quickly seeming to jump back and forth. Two ideas come to mind regarding the dot's genesis:

1.) There is a strange aircraft up there;
2.) Oh.Mi.God. Extraterrestrials have come to visit Dixon!

I had a third possibility in mind. As I wrote Traci:

I've been wondering about that shifty dot too. From the photos, it looks like you were barely shielding yourself from the sun. It may be that the camera lens, two inches farther in front of eyes, could have been catching just the barest bit of sunlight, leading to the apparent presence of a shifty dot. If so, it should be possible to re-create the dot by taking more photos under similar conditions. 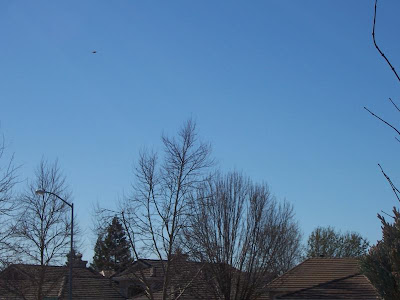 Left: A mysterious disc appears in the upper-left of this photo, taken on February 14th.

Traci tried to reproduce the conditions that led to the observation of the rapidly-moving dot, in order to confirm whether or not sun glint caused the appearance of the bright dot, but instead, she captured a photo of an even larger UFO.

I have absolutely NO IDEA what caused the presence of that disc! My first impulse is to say that it is a bird in flight, but really, who knows?

To summarize, two ideas come to mind regarding the disc's genesis:

1.) There is a strange bird up there;
2.) Oh.Mi.God. Extraterrestrials have come to visit Dixon!

Marc Valdez doesn't do unscientific explanations, so the bird explanation will do, for me, for now (but I must admit my rationalizations are getting harder and harder to accept...).
Posted by Marc at 10:43 PM