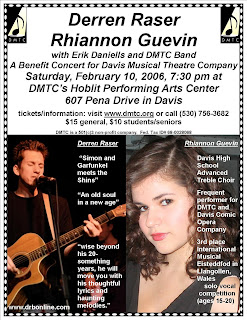 Here we go with the concert series again, but this time with an added treat - Rhiannon Guevin shares the bill! Darren Raser is the professional musician, and Rhiannon is the excellent YPT veteran with the amazing voice.

Here are portions of the press release:

**One of Music Connection Magazine's "Top 100 Unsigned Artists of the Year"**Award winner at this year's John Lennon Songwriting Contest.An old soul in a new age, Derren Raser stands out from the monotonous fray of popular music. Witty, well-spoken and wise beyond his 20-something years, singer-songwriter Raser will move you with his thoughtful lyrics and haunting melodies. His ballads are old-fashioned folk stories and beautiful tributes to love lost and found.Combining lively folk-rock and classic singer-songwriter traditions with the hard edge of contemporary pop and rock influences, he has honed a cutting edge sound that is immediately both fresh and familiar. His music has been described as "Simon and Garfunkel meets the Shins.” It is music that sounds equally at home on an old dusty hi-fi or in a sleek new iPod.Born and raised in suburban Kansas, Derren has undertaken the Southern California music scene and emerged with his wholesome Midwestern sensibilities intact. He employs a thoughtful, sincere approach to songwriting and performing - his dynamic live performances have been described as “emotive expression that is nearly flawless in its purity" (Jake Sibley--944 Magazine). His guitar work is centered on pristine and intelligent arrangements, each note painstakingly placed to complement the stark clarity of his unmistakable voice. This combination of intention and talent is rarely achieved and is not easily forgotten.A versatile performer, Derren is at home playing intimate dives and big name venues alike. He is a regular on both the San Diego and Los Angeles music scenes, and is constantly working to bring his unique music to new audiences. People nationwide are taking notice. Derren and his music have recently been featured on NPR’s “All Songs Considered,” and have appeared in 944 Magazine, Union Tribune, the Troubadour, Olathe Daily News, and numerous online publications. Derren is currently promoting his self-released album, King of I’ll Tell You Next Week, which has been hailed as “awash with talent!" (Andrew Salyer--www.upbeatmusic.com) and “wildly entertaining" (Craig Yerkes--the S.D. Troubadour).A unique and abundant talent, Derren will continue to share the stage with greats like Nickel Creek, Hem, Ollabelle, Ben Taylor, Sonya Kitchell, Garrison Starr, Arnold McCuller, Richie Cannata and more. Derren Raser is gaining momentum, and you won’t want to miss his rise!

Guevin has also performed in numerous recitals and choral performances. At age 15, she placed second in the under 18 bracket of the regional National Association of Teachers of Singing vocal auditions. Just weeks after her 16th birthday, Guevin won third place in the solo vocal competition (ages 15-20) at the International Musical Eisteddfod in Llangollen, Wales, where judges remarked on her “lovely centered voice with impeccable sense of pitch.” Others have also commented on Rhiannon’s “lovely voice and charming performance,” calling her “a delight to listen to and watch.”

In addition to Davis Musical Theatre Company’s (DMTC) Main Stage and Young Performers Theater musical productions, DMTC now presents benefit concerts showcasing talented local, regional, and touring artists. The artists selected will vary in musical style, but all will be fantastic, and all concerts will be family-friendly events.

DMTC goals in presenting these benefit concert are: