Opening Weekend Of "Oliver!" AT DMTC 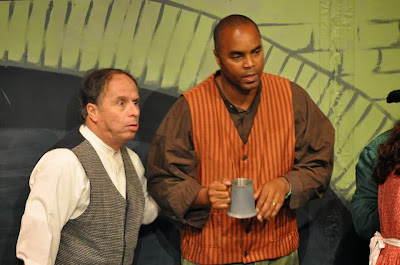 
Opening weekend was fun. There were some mild problems, but things went better than I had feared. In my opinion, houses were surprisingly-large.

In the Sowerberry Funeral Parlor chaos of Act I, Gabe's service dog "Shadow" became worried at all the screaming on stage, slipped his minder, and galloped on stage to find out what was wrong. I had a bit of trouble executing a set change - removing the bed from the platform above - because it was the first time I had executed that recently-assigned set change.

During rehearsal period, Summer Rejmankova had offered praise that I had not stepped on her skirt when stepping over her in the "Consider Yourself" dance sequence. On Saturday, that luck ran out. Summer's heavy, Velcro-challenged skirt peeled off as I lifted her for better audience view, exposing abundant petticoats. Joe the Plumber was in the audience, and found much mirth in that scene.

Sally and the Bruenings were in the audience on Sunday. Shadow had another brief moment unescorted onstage, during the 'London Bridge' sequence, but he quickly realized his error and retreated into the wing. I got distracted by an interesting conversation with Summer and almost changed into the wrong clothes. I was in the wrong pants for the dance segment of "Who Will Buy?" Shane hammered either his shin or his knee on furniture during the show, and was limping painfully around during Act II.

But it could have been worse. 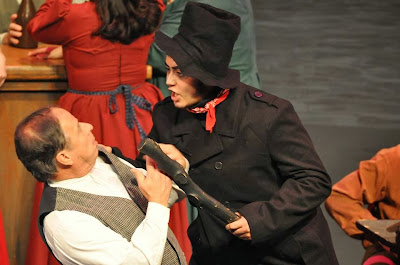 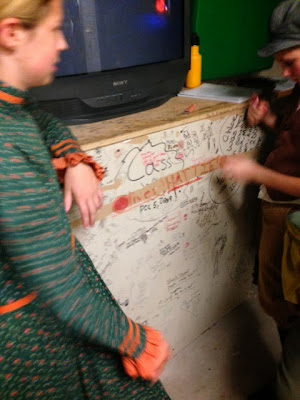 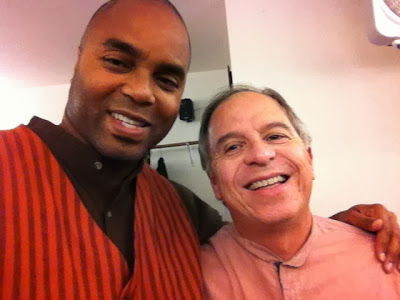