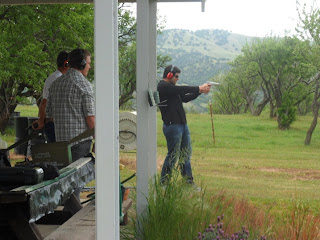 Despite my more-deaf-than-usual ears (because of the George Clinton concert the night before), even I was able to hear the ruckus outside after Easter dinner. What was going on?

Several of my hosts were target shooting! A more-martial Easter than I expected! 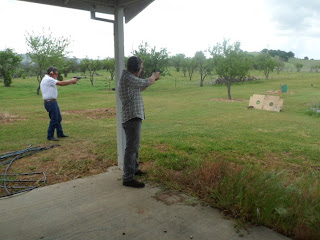 My hosts were welcoming - they asked: "Would you like to shoot?". I hadn't fired a pistol in 28 years, since 1985, when I had a frustrating experience with Steve Martin shooting at nearby metal silhouette targets at Albuquerque's West Mesa gun range (targets that always seemed to be moving around just as I shot, so I often didn't hit them at all). Nevertheless, I was game (even though I'm a rabid anti-NRA foe). As they say, when in Rome!

They offered me a Canadian-made, Para-Ordnance 40 caliber pistol. I squeezed two shots off, and hit both targets, with a respectably-short distance between bullet holes and the bulls-eyes. Since I could only go downhill from there, and before the targets could start dancing around, I stopped, and graciously thanked them for their generosity. 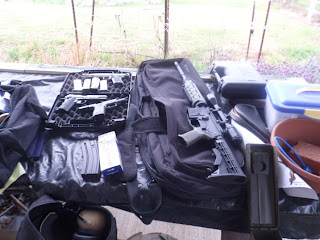 They had a number of weapons available, including everyone's most-popular weapon this year, the AR-15, altered so as to be "California-legal". Because of the erratic rains, they never got around to firing it. 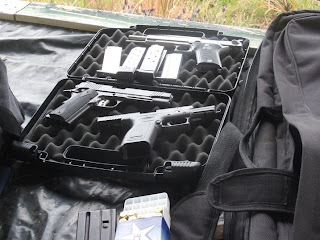 Once I arrived at the shooting location, they handed me ear protection. Nevertheless, my initial approach to them had been without adequate ear protection, and the noise was loud! Adding to last night's ear assault, I found myself afterwards suffering a few minutes of actual ear pain. So, time for a quiet period. Back to the house!