Yasi thunders on in the Outback, causing no end of distress out there.

I have to agree about the Weather Channel here in the U.S., though. They scarcely mentioned Yasi at all, and focused all their energies on the big U.S. snowstorm. People! It's supposed to be the 'Weather' Channel, not the 'Those U.S. Snowstorms Large Enough To Inconvenience Well-Heeled Travelers At Major U.S. Airports' Channel!

Here is a selection of the bulletins they are posting: 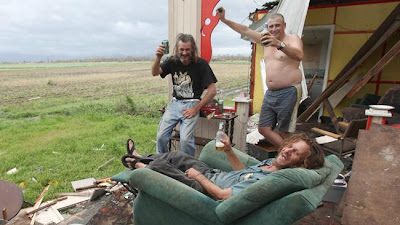 3.22am. Daryl Webber has told how he celebrated his 42nd birthday on Wednesday night waiting for Cyclone Yasi to smash down on his home at Silky Oak, 5km south of Tully. Little of the home he shared with his mates Andrew Schirner and Mick Pearson was left yesterday. But they managed to celebrate the passing of the cyclone with a beer and a laugh.

"I was yelling out, 'Stay down and duck for cover'. When the cyclone hit we just hoped for the best, because if the house went, we knew we would be gone, too." 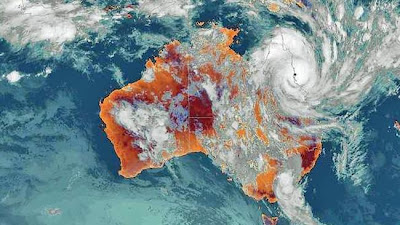 Cyclone Yasi weakened to a tropical depression overnight and the cyclone warning for inland towns including Mt Isa was cancelled, though locals were warned winds could still reach 90km/h.

The hardest hit communities are Cardwell, Tully, Innisfail and Mission Beach. There are major concerns of flooding in Townsville, Ingham and Giru. Police will search today for a man last seen moving his boat before the cyclone struck.

...In one good news story a dad called Storm after his own dramatic birth saw his baby daughter safely delivered as the cyclone bore down on Innisfail.

...Until as late as Thursday night, meteorologists were not sure whether Yasi would wipe out a large town. In the 24 hours before landfall, Yasi had been tracking straight for Cairns, before twisting south towards Innisfail.

Then, for three hours before it devastated even smaller communities along the Cassowary Coast, it started to slow - just in time to avoid coinciding with a king tide that would have produced killer storm surges.

Yasi's eventual landfall, in the tiny communities midway between Cairns and Townsville, made all the difference between property destruction and death.

...4.18am The Courier-Mail reports one of two men reported missing in the Innisfail area has been located and police are optimistic another man, last seen moving his boat in Port Hinchinbrook, will be found.

"He said he was moving his vessel into the mangroves to be safe from the storm surge. We haven't heard from him," a police spokesman said. "We can't get into that area by foot. We're trying to get a police water search as soon as we can, as well as do an aerial survey of the area."

...2.11am The Daily Telegraph reports that in a sweep by helicopter from Cairns to Ingham it has counted at least 100 totally unsalvageable homes and countless more damaged properties.

...8.00pm Residents of Mt Isa - 800km the coast - are preparing for something they see as beyond their comprehension: a cyclone. The latest weather bureau report has the cyclone reaching Mt Isa at 1am Queensland time (2am AEDT) as a category one event, which could bring damaging winds of up to 120km/h.

7.24pm People in remote parts of central Australia have been warned to prepare for possible isolation. They are urging anyone who doesn't want to become isolated in the community, or those who are frail or ill, to stay with friends and relatives in a regional centre such as Tennant Creek or Alice Springs

...5.34pm In Townsville today, Premier Anna Bligh say she's surprised category five cyclone didn't cause more damage but also warned that it is too early to know the true extent of the devastation.

It's been totally remarkable to me as I drive through and see the size of trees that were brought down in this event that we don't have massive structural damage here in Townsville.

5.12pm Farmers are unlikely to be covered for crop losses in the aftermath of Cyclone Yasi, the insurance industry says, as early predictions suggest more than 90 per cent of Australia's banana plantations were destroyed overnight.

4.54pm A church in Cardwell lacks walls and a roof. Its pews lie on the floor and a hymn book sits open at a page with the words: "We all thank our God with hearts and voices Who wondrous things hath done."

...1.08pm Here come the price rises. Remember when Cyclone Larry wiped out 90 per cent of our banana supply? The same applies to Yasi, with early estimates of $13 a kilo predicted right through 2011.

"It did then, and I can't see any reason why it wouldn't now," National Farmers Federation president Jock Laurie said referring to the 2006 disaster.
Reports from the ABC back then suggested prices would "skyrocket" to $6 a kilo. Australia doesn't import bananas, due to their pest-free status at home, so there's no avoiding it.

...11.19am This description of being in the eye of cyclone Yasi comes from Mission Beach local Ken Byce.

"It was very quiet, eerie, we could see the stars, it was clear, just amazing."
After experiencing hours of winds above 250km/h, the night suddenly turned quiet and serene at around midnight, Mr Byce said.

"Then it came back from the north. It had been blowing from the east and the south all through the first part, then she turned around and came from the north, that's what wiped out and flattened a few of the weaker houses."

...9.50am Daylight has revealed a devastated landscape at Innisfail, which was devastated by Cyclone Larry in 2006.

"It's just like the place has been sprayed with napalm," said Cassowary councillor Bill Horsford.

"There's hardly a green leaf around, all of the beautiful mountains are now brown."

...9.01am Callers to ABC radio describe their experiences in the cyclone, saying Larry was "nothing compared to this".

One woman tearfully pleads for people to think of those on farms as she tells of writing her phone number on her horses - which are now lost - in the hope they would be found again. Another resident describes "100 foot coconut trees" planted in 1918 bent in half by the winds.

...8.29am There is "virtually nothing standing" in Tully, says Tully Times reporter Linda Timms about the surrounding rainforest.

From her home at the base of Mount Tyson, Ms Timms said on ABC Radio she had no view of the mountain through the trees before the cyclone, but now it is a clear view.

...5.47am Funnily enough the US Weather Channel has gone nuts for the storm in the US, but makes no mention of cyclone Yasi. Their outlook for Cairns is for scattered thunderstorms and a 60% chance of rain.

...7.21pm Some historical context from one of the Bureau's forecasters, Alan Sharp, speaking to Reuters. If Yasi maintains its current intensity when it crosses the coast, it will be the strongest cyclone to hit Queensland since 1899