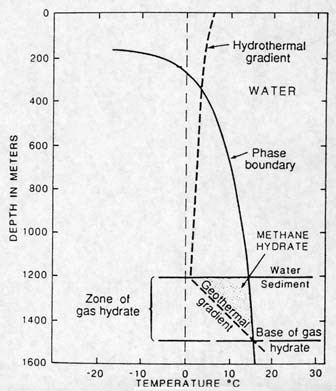 Just trying to puzzle out that out-of-control Gulf of Mexico oil well here. This diagram is helpful:

Methane Hydrate Stability Curve. In this example, the zone in which gas hydrate can exist is between 1200 and 1500 meters. (Actually, methane hydrates can exist anywhere from about 300 to 200 meters, depending on temperature conditions and sediment depth.) To explain the various lines: The "phase boundary" line (a pressure/temperature line) divides the methane as hydrate (that is methane ice) to the left of the line from methane that has dissociated from hydrate on the right. The "hydrothermal gradient" dotted line indicates the water temperature. The "Water/ Sediment" line marks the seafloor. The "geothermal gradient" dotted line indicates the temperature of the sediments, which increases with depth. At some depth (marked by the line "Base of gas hydrate"), the sediments become too warm for hydrate to exist. Below this depth, free ethane can exist, but not methane in ice. Methane hydrate, therefore, can only exist in the speckled area. (Kvenvolden, 1993)

Apparently there is a rapid temperature drop as the oil/methane mixture rises to the sea bottom. Accompanied with the abrupt decompression and extra adiabatic cooling that might occur as the mixture is released into the ocean, that helps explain why so much methane clathrate hydrate slush gets formed. It's like instant snow down there!

The diagram also helps explain why the oil companies don't see this slush in shallower water (the temperature is too high and pressure is too low).

BP's response to this blowout always seems ad-hoc: they always seem to be confronted with new phenomena that they should have expected all along, had they actually understood their textbooks (but likely didn't).

The first two containment domes they tried apparently can't function if they are filled with slush. The questions I have then are: Given the likelihood of slush, why did they try the containment domes and waste valuable time? Why didn't they expect slush? Are they really that dense?

BP is learning a series of horrifically expensive lessons here!

For the rest of us, we need to start protesting the most effective way we can. It's time to start boycotting AM/PM....
Posted by Marc at 1:22 AM