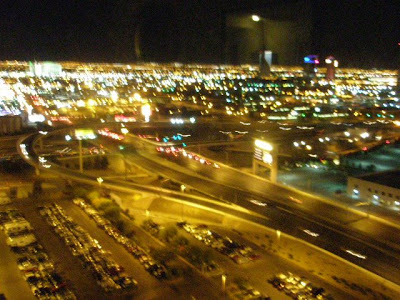 Left: View of Tropicana and I-15, from my room. 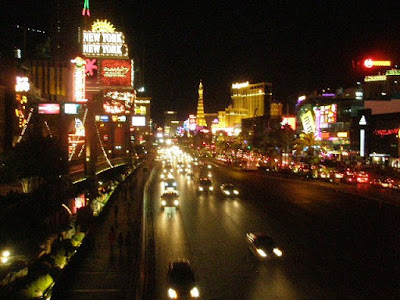 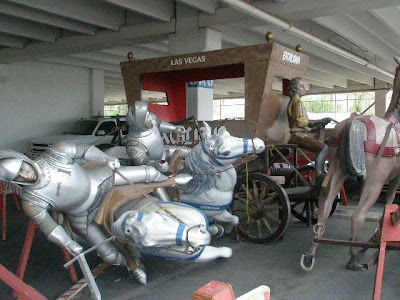 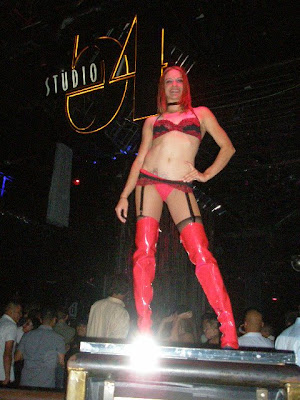 
I drove into Las Vegas from the NW, on Highway 95, about 11 p.m. I had no plans where to stay, but I remembered where the Excalibur registration desk was located (having stayed there last October), so I went there first. There was a long line there. Terrible. What would the charge be?

And the room turned out to be a 3-room suite: enormous bed, enormous bathtub, shower, couches, a bar, 2 sinks and 2 toilets. What am I going to do with 2 toilets? Same as I would do with one toilet, I presume. Grandiose beyond belief! Too bad I would be here for just 11 hours!

I had to squeeze days worth of debauchery into two hours, three hours tops, so I headed over to the MGM Grand.

The music was unappealing at Studio 54, so I played blackjack instead for an hour (loss: $120). Returning to Studio 54, the music had much improved, so I danced, danced, danced! A few strange things there.... Flailing my arms, as is my custom, I accidentally gave a guy a slap on the behind. Well, I hope he was flattered. A break dancer spun on his head - amazing! How do they do that?

At the MGM Grand they had signs for a birthday party to be held at the Tabu UltraLounge, for Natalie Martinez. I wonder who she is? A microcelebrity wannabe, maybe? Maybe I should do the same and rent out Tabu?

I got five hours of sleep, tops. Sightseeing helicopters woke me up. The day would be blazing hot!

After an oil change at the East Tropicana Jiffy Lube, I quickly hurried over and got stuck in the Hoover Dam traffic jam. Nothing like idling in a hot tin can perched on the side of a stuffy desolate desert canyon on the hottest afternoon of the year so far!
Posted by Marc at 1:39 PM