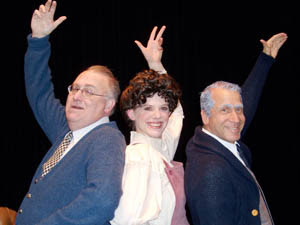 You Have To Hand It To Herb!

He knows how to get good press!:

Two hours before his most recent State of the State speech, Gov. Arnold Schwarzenegger had one thing on his mind.

That’s how Herb Schultz, the governor’s senior advisor on health care, recalls it.

The former action-movie star was preparing for his January 8 address to a joint legislative session when he paused to encourage his health-care reform point person, who was poised to snag a role that night in Davis Musical Theatre Company’s production of the Lerner and Loewe chestnut.

“He was very enthusiastic as I told him that I was going to callbacks that night for leading roles,” Schultz said during a break from rehearsals at Hoblit Performing Arts Center. “He was strongly encouraging, thought it was fantastic.”

Most community-theater actors do not have two constantly buzzing BlackBerrys on the sofa cushion in front of them and a jacket emblazoned with the California governor’s logo hanging on an adjacent armrest. But after grueling hours doing the dance with legislators, lobbyists and policy wonks to craft the administration’s ambitious health-care agenda, Schultz is spending his “down time” pounding the boards alongside computer geeks, high-school teachers and great-grandparents, preparing to play Henry Higgins’ befuddled buddy, Colonel Pickering.

The lifelong theater lover would not have it any other way. Growing up in suburban Philadelphia, Shultz performed in musicals from middle school through high school, always gravitating toward the comedic roles. By college, his life took a more serious track that would eventually lead him to the law and government. The only time he got to satisfy his theater jones at American University in Washington, D.C., was in 1983, during the second semester of his junior year, when he played Motel, the tailor in Fiddler on the Roof.

He and his partner of nine years, Los Angeles-based business lawyer Stuart Leviton, tried to fill the void by seeing all the live theater they could, usually near their second home in West Hollywood or during trips to New York City’s Great White Way. “I had a strong desire for years to get back but did not,” Schultz said of his stage absence.

He finally got back in 2002 when, as a member of the Gray Davis administration, Schultz had lunch with a lobbyist friend who just so happened to be directing a Lambda Players production of the comical farce The Ritz and mentioned auditions were being held the following week. Schultz quickly prepared for and landed the role of chubby-chaser Claude Perkins.

When a friend who was the chief of staff to a state senator invited Schultz and Leviton to the 2003 DMTC production of Guys and Dolls he had choreographed, the couple fell in love with the plucky, all-volunteer company that mounts lavish shows on shoestring budgets. “This is a real community treasure,” Schultz said.

He and Leviton have been financial supporters ever since. But the encounter sparked more than generosity. “It again piqued my burning desire to get back on stage,” Schultz said. Responding to audition notices, he snagged roles in DMTC’s 2004 staging of Bye Bye Birdie and, a part he always dreamed of playing, Sir Evelyn in Anything Goes.

That briefly shaped up to be Schultz’s final local performance. Shortly after the run, he left his job as Schwarzenegger’s acting director of the state Employment Development Department and returned to L.A. to be with Leviton and their bichon-poodle mix, Barnaby. He later became vice president of government programs with Denver-based McKesson Health Solutions. Jaunts to Davis were not on his cross-country itinerary.

But about a year later, Schultz returned to the Schwarzenegger administration as one of a handful of senior advisors, and those DMTC audition bills again caught his eye.

Lest anyone think My Fair Lady is a diversion from a moribund political battle—Schwarzenegger’s health-care proposal was recently shot down by a state Senate committee—Schultz vows that he and the governor continue to vigorously push for universal coverage and comprehensive reform. “Personally, I have not slowed down,” he said defiantly.

Schultz says the tricks of the political trade he’s picked up over the years have made him a better actor.

“I am recognized for my skills, from being a lobbyist and a good political mind, in bringing people with diverse backgrounds and philosophies together to support a goal. I did 1,300 stakeholder meetings on health-care reform. These skills come in handy in working together with a cast.”

His latest cast is now calling him back to the stage, back to rehearsal.