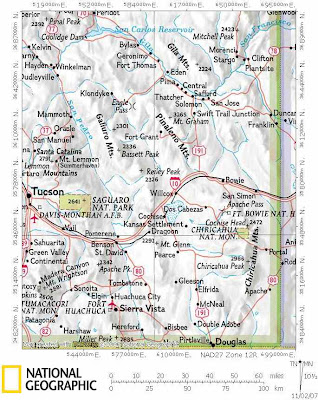 
Several years ago, I picked up a big coffee-table-type book at a used book store called "To The Inland Empire," written by former Interior Secretary (under the Kennedy Administration) Stewart Udall. The book concerns the Coronado Expedition, Spain's vanguard 1540/42 exploration for gold in the American Southwest. (Interestingly, this particular 1987 volume has Udall's signature on the inside front cover).

One of the abiding mysteries of locating Coronado's exact trail in the Southwest is the identity of a prominent brick-red ruin they called Chichilticale (believed to be a Nahuatl word for "Red House"). The mystery is part of identifying the exact location where the Cibola-bound expedition departed eastwards from the San Pedro River in Arizona towards the Mogollon Rim, some distance north of the current international border.

There are a number of plausible places where an expedition can turn east - Government Draw, Texas Canyon, Tres Alamos Wash, etc., etc. even as far north as Aravaipa Canyon. One of these paths is correct. But which one? The written record is of some help, but since Coronado was in a strange land, the record is sometimes vague - even conflicting.

According to Udall's book (and assuming, for the sake of argument, that the path went through the Winchester Mountains):

Coronado's destination beyond the pass in the Winchesters was a ruin at "the foot of the cordillera" called the Chichilticale by local Indians. The exact location of this landmark is a mystery. It's eroding walls were last seen and described as "...perfectly filled with stone and mortar..." by Captain Juan de Anza in 1775; but by the time scientists began to search for it, in this century, erosion had obliterated its foundations.

The dean of southwestern archaeologists, Dr. Emil W. Haury, of the University of Arizona, has been involved in the search for the Chichilticale for sixty years. He walked over the ground with Professor Bolton in 1940 and believes it will ultimately be identified by men and women of his profession somewhere near the 76 Ranch, in the foothills of the western flank of the Pinaleno Mountains. At eighty, Dr. Haury is still excited by the riddle of the Red House. When Chichilticale is located, he says, it will enrich science and surely become a premier historic place in our national park system.

Another geography puzzle concerns the location of the nearby Chichilticale Pass, described by Juan Jaramillo. It was at this notch that the Europeans would have had their first glimpse of the region they called the despoblado. It is likely the Chichilticale Pass was part of the nineteenth-century military trail to Fort Grant, which ascended the canyon between Cedar Mountain and Cedar Springs Butte. But, again, Spanish or Indian artifacts should someday provide solid proof of this exact position of this pass in the Pinalenos.

When I first read this, I thought "This has got to be the biggest pile of horse droppings west of the Mississippi."

First, in the arid southwest, erosion takes nearly forever to obliterate anything. People's activities erode foundations considerably faster than water. No doubt, people already know the location of the Chichilticale ruin, it's just that they haven't made the connection that this particular ruin IS Chichilticale.

Secondly, Udall takes it almost as a matter of faith that the deans of southwestern archaeology were correct in asserting that Chichilticale is located at the western end of the Pinalenos, somewhere around Eagle Pass. Indian ruins are not like the mythic Scottish village of Brigadoon, disappearing for a century at a time, then to reappear again for a day in the light of dawn. Given the slow rate of decay of Indian ruins, I would maintain that if there aren't any good candidates for Chichilticale already in evidence at Eagle Pass, whether in 1940, 1987, or today, then it is unlikely that Chichilticale is to be found at Eagle Pass.

Presumably 150 years of Apache Indian wars in the region had accelerated the decay of Chichilticale, and led to the collapse of its signature brick-red walls. The ruins must still be there, however. So, as a fun project (say, in retirement) it would be nice to track these things down, and identify Chichilticale to everyone's satisfaction!

Lo, and behold, an independent researcher named Nugent Brasher, a petroleum exploration geologist living in Glenwood, N.M. (odd place for petroleum, but nevermind) reports in the latest issue of The New Mexico Historical Review (Fall 2007, Volume 82, Number 4) on his search for Chichilticale. His article is entitled "The Chichilticale Camp Of Francisco Vasquez de Coronado - Search for the Red House."

With enthusiastic energy, Brasher tramped up and down the countryside looking for Chichilticale. For the purpose of his search, in order to insulate his mind, he made a point not to read the potentially-misleading academic literature, but rather, to read a carefully-selected subset of writings directly from the expedition itself, in Spanish, and in English translation.

Brasher believes the Coronado expedition headed eastwards from the San Pedro River fairly early once it passed Miller Peak in the Huachuca Mountains, and went up Government Draw. He places Chichilticale at Kuykendall ruins, adjacent to Turkey Draw, at the western foot of the Chiricahua Mountains. Chichilticale Pass he identifies as Apache Pass, at Fort Bowie.

Brasher also assembles several lines of technical evidence indicating Kuykendall ruins is Chichilticale. The brick-red color of the fire-burnt walls of the eroded ruin is consistent with the brick-red color attributed to Chichilticale. In addition, the presence in the ruins of a specific kind of iron bolthead used in Spanish crossbows during Coronado's time (but no later), plus a period nail shank also serve as potentially-confirming evidence.

The Spaniards also indicated that the mountain range direction *bent* at Chichilticale Pass. Since the Pinalenos trend a different direction than the Chiricahuas, I always figured that's what the Spaniards meant by a bend. But at Apache Pass, the mountains are much smaller than the Pinalenos and the bend is very noticeable - and intimate. At Apache Pass, the Dos Cabezas mountains run NW/SE, and the Chiricahuas N/S! This line of evidence is circumstantial, but does strengthen Brasher's point to some extent.

To me, Brasher's argument makes a lot more sense than placing the San Pedro departure point farther north. The reason comes from Coronado's own words, to Mendoza, as quoted in Udall's book, describing the despoblado after Chichilticale Pass:

To vary our past tribulations, we found no grass during the first days and encountered more dangerous passages than we had previously experienced. The horses were so exhausted they could not endure it, and, in this last desert, we lost more than previously. The way is very bad for at least thirty leagues or more through impassable mountains. But, when we had covered those thirty leagues, we found fresh rivers and grass like that of Castile.

Thirty Spanish leagues, at 2.6 miles per league, works out to be about eighty miles.

If Chichilticale Pass is at Eagle Pass, at the west end of the Pinalenos, the distance up the Calva military road to Point of Pines, AZ is only about 70 miles - likely too short for Coronado's memory. If, however, Coronado went through Apache Pass, down the San Simon Valley on the east side of Mt. Graham, and then, instead of heading up the west side of the Gila Mountains, went up Bonita Creek on the east side, then the distance is more like 100 miles - even longer if they indeed went up the Calva road. An arduous trek, even granting the chance for a rest besides the banks of the Gila River!

There is a certain line of romantic environmental thinking that grazing in the San Simon Valley was once much better (prior to the big cattle herds of the 1870's and 1880's). I'm skeptical of some of this thinking, because I doubt Arizona could ever have sustained Texas-sized cattle herds, even then. I just bet the San Simon Valley was nearly as depressing a despoblado ride then as it is today. That would, indeed, be a hard trek for more than a thousand Spaniards, and their livestock, on that saltbush flat, followed by the ascent up the Mogollon Rim!

To me, Brasher's argument has a ring of truth, a plausibility, that should require careful attention.

And I guess I'll have to do something else in retirement....
Posted by Marc at 11:25 AM