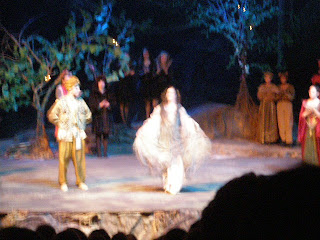 Left: Bows. Katie Rose Mennemeier (The Ash Girl) curtsies on opening night of the show. On the left, Justin Fernandez as Prince Amir. On the far right, Colette Des Georges as the evil step sister, Ruth. Behind her, Girlmouse (Stephanie Perez) and Boymouse (Alena Ross). In the far background, Spiders (Hailey Hayes, Dominique Sala, and Vanessa Stott. Behind Prince Amir, and to right, I believe is Otter (Madeline Lasell).

I had no real business being out on a Friday, with a fever, but I was worried this was my only opportunity to see Katie Rose Mennemeier (who I knew through Victoria's dance class) in her star turn! So, on my first visit ever to St. Francis High School, I hid in the back and endeavoured to have as little contact with people as possible, even though I recognized a few familiar faces, and scuttled out as fast as possible after the show.

"The Ash Girl" is a Cinderella story, but darker. The Ash Girl is haunted by the Seven Deadly Sins (Slothworm; Angerbird; Envysnake; Gluttontoad; Pridefly; Greedmonkey; Sadness and Lust) who try to keep her from realizing happiness with Prince Amir. On Ash Girl's side are other spirits (Owl; Otter; Fairy, the Voice in the Mirror; Girlmouse and Boymouse) who try to buck up her spirits.

This review provides a good summary:

“The Ash Girl," by contemporary British playwright Timberlake Wertenbaker, could be called “Cinderella with a Backbone." Unlike the passive Cinderella of Disney‘s 1950 cartoon, who is a helpless plaything of her cruel stepsisters and stepmother until her rescue by a handsome prince, Wertenbaker‘s Ashgirl needs to choose her destiny and make it happen.

... This “Cinderella" is more about choosing wisely when many bad choices are available than it is about being magically transported away from your troubles.

Ashgirl ... will be familiar to some teens and parents. Lacking in self-esteem, she is shadowed by depression, which is personified ... as Sadness. Rolled up ... on the floor, Ashgirl emerges only to say, “Ashes are warm. In the ashes no one sees you. Ashes are safe. I will stay in these ashes, melt into them."

...Despite its dark currents, the play ends well. Ashgirl learns to stop being so critical of herself, to be honest about what she really wants, to listen to the brave “inner" girl who often gets suppressed as girls enter adolescence, and to assume the courage needed to “go for it." And there is a good deal of humor along the journey, as well as a wise look at the realities of “romantic" love. This is a play that parents and teenagers may want to see together.

As might be expected, playwright Wertenbaker's best, and most amusing, lines are reserved for the added characters to the Cinderella story, particularly the Seven Deadly Sins. Nevertheless, for the added characters, there was curious Emphatic! Character! To Their Lines! That Made For An Oddly! Monotonic! Delivery! (with the exception of more sing-song Molly Krafcik as Envysnake). Quite wordy! The playwright's perogative, but still, he could have been a little easier on the cast! Perhaps I've been doing too much musical theater of late, because I thought the Seven Deadly Sins would have worked better as a light-hearted musical number (like Disney's The Jungle Book's 'The Bare Neccessities'. Then again, darkness suits me poorly....)

The stepsisters (Colette Des Georges and Cady Drell) and the stepmother (Elena Coupal) performed admirably! I liked Yara Zokaie as Princess Zehra. And Katie Rose was wonderful (of course) as Ash Girl!

In general, a very well-done show and well-worth seeing! It continues through this weekend and ends next weekend.
Posted by Marc at 2:51 PM