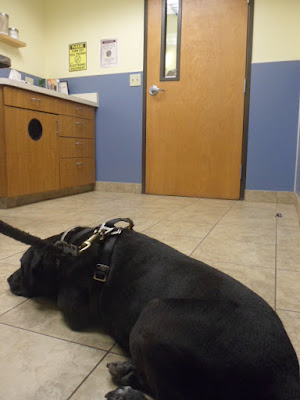 Today, Bella is undergoing sedation to obtain several X-Rays in order to better understand her right front leg limp. Despite the pain, Bella is a soldier, and once again revealed absolutely nothing to the vet during interrogation.

Pain isn't enough to deter Soldier Bella on her nightly walks. She's compensated by trotting (which minimizes the time spent on the injured leg), slowed down only by the sluggish, two-legged, flat-footed human she has to tow behind.

There is a hidden universe of pain out there on the streets of Sacramento. One night, we were on 19th Street just south of Step One. I could see a slight person in a hoodie stumbling along the railroad tracks between U and V St. That rocky strip didn't strike me as a natural path between destinations. I sensed fear. Bella and I turned the corner at W St. and came face-to-face with the person: young, black, but because of the hoodie, of indeterminate sex. The person looked terrified, and stumbled away into the dark.

Last night at Safeway, I watched two people in sleeping bags on the sidewalk across 19th St. A big, heavy man rolled on top of the other person, repeatedly said "So, you say you're sorry - what are you sorry about?" then repeatedly slugged and pounded on the person pinned underneath, who started screaming in pain. Repulsed, I went over to Safeway and alerted the security guard, and asked him to call police.

The security guard walked over to observe, where all was now quiet, and said "I asked those two to leave the Safeway parking lot earlier this evening because of their arguing." The security guard had a limited mandate - just Safeway, not across the street. He didn't call police. He said "I'll keep an eye on them." Security guards and police can't repair every dysfunctional relationship in the world.

I've actually somewhat-taught Bella not to always eat found chicken bones (although she did eat one several nights ago before I could stop her). Nevertheless, she was very unhappy when I pulled her away from a complete, intact rotisserie chicken sitting in the middle of a parking lot under Highway 50. Bella resisted and resisted my tugging her away, and she was very unhappy, but as I emphasized to her, rulez is rulez.
Posted by Marc at 1:44 PM