Shoe Tossing Near Where I Live 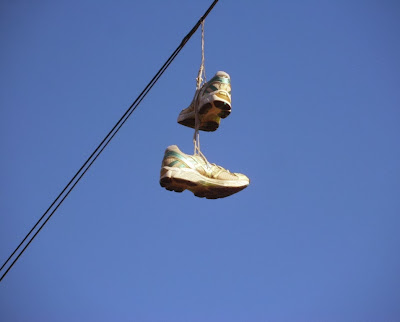 These shoes mark the West End of what I suspect to be a Drug Zone.


I was mystified why people in my neighborhood toss shoes on electrical lines. So, time to consult Wikipedia:


Shoe flinging or "shoefiti" is the practice of throwing shoes whose shoelaces have been tied together so that they hang from overhead wires such as power lines or telephone cables. The shoes are tied together by their laces, and the pair is then thrown at the wires as a sort of bolas. This practice plays a widespread, though mysterious, role in adolescent folklore in the United States. Shoe flinging has also been reported in many other countries.

...A number of criminal explanations have been proposed as to why this is done. ... Some also say that shoes hanging from the wires advertise a local crack house where crack cocaine is used and sold (in which case the shoes are sometimes referred to as "Crack Tennies"). It can also relate to a place where heroin is sold to symbolize the myth that once you take heroin, you can never "leave": a reference to the addictive nature of the drug. Others claim that the shoes so thrown commemorate a gang-related murder, or the death of a gang member, or as a way of marking gang turf. ... However, the practice also occurs along relatively remote stretches of rural highways that are unlikely scenes for gang murders, and have no structures at all to be crack houses. 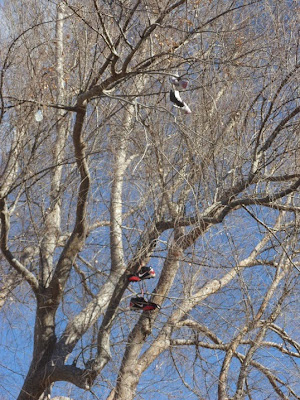 These shoes mark the East End of what I suspect to be a Drug Zone.


I rather like the drug-sale explanation offered on Wikipedia, because these shoes bracket a location where I often see mysterious people waiting in the shadows, and where there is mysterious traffic. A decade ago, I remember a Big Raid here, where a swarm of police shut them down at gun point. My guess is either that they have returned, or it's a new group resistant to the lessons of the past. 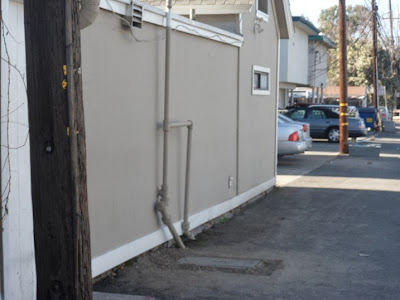