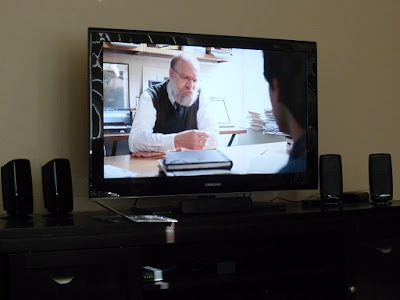 Candy had a great idea. Let's get all the young, hip PhDs she knows at work together for a party, to screen "The PhD Movie". Candy was particularly fond of this movie, because it was filmed at CalTech, her alma mater, and features the Ballroom Dance Club, her favorite leisure activity at CalTech, as well as including several people she actually knows. (Since I was once the Vice President of the Ballroom Dance Club at UNM, I felt a second affinity to this movie.)

We got into trouble almost immediately because everyone's schedules were so non-congruent. And, truth be told, she doesn't know that many Ph.D.'s at work, because there aren't that many Ph.D.'s at work. So, she tried relaxing the specifications a little bit. Even young, hip people with Master's degrees, or with incomplete Ph.D. dissertations, were welcome. In the end, just a few of us showed up, and I had to leave early anyway. (I'm just flattered that I was young and hip enough to be included).

Nevertheless, a well-done movie that highlights the eternal plight of graduate students in the sciences!


Based upon the PhD Comics series by Jorge Cham.