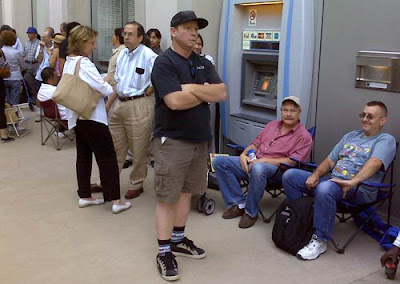 Left: Customers wait outside of the IndyMac headquarters in Pasadena for the bank to open. The FDIC took over ailing IndyMac bank on Friday. (Al Seib / Los Angeles Times)

July 14 (Bloomberg) -- The U.S. Treasury Department's plan to shore up Fannie Mae and Freddie Mac is an ``unmitigated disaster'' and the largest U.S. mortgage lenders are ``basically insolvent,'' according to investor Jim Rogers.

Taxpayers will be saddled with debt if Congress approves U.S. Treasury Secretary Henry Paulson's request for the authority to buy unlimited stakes in and lend to Fannie Mae and Freddie Mac, Rogers said in a Bloomberg Television interview. Rogers is betting that Fannie Mae shares will keep tumbling.

...``I don't know where these guys get the audacity to take our money, taxpayer money, and buy stock in Fannie Mae,'' Rogers, 65, said in an interview from Singapore. ``So we're going to bail out everybody else in the world. And it ruins the Federal Reserve's balance sheet and it makes the dollar more vulnerable and it increases inflation.''

The chairman of Rogers Holdings, who in April 2006 correctly predicted oil would reach $100 a barrel and gold $1,000 an ounce, also said the commodities bull market has a ``long way to go'' and advised buying agricultural commodities.

Rogers, a former partner of hedge fund manager George Soros, predicted the start of the commodities rally in 1999 and started buying Chinese stocks in the same year. He traveled the world by motorcycle and car in the 1990s researching investment ideas for his books, which include ``Adventure Capitalist'' and ``Hot Commodities.''

Billionaire investor Soros said today that Fannie Mae and Freddie Mac face a ``solvency crisis,'' not a liquidity one, and that their troubles won't be the last financial disruption, Reuters reported.

...``These companies were going to go bankrupt if they hadn't stepped in to do something, and they should've gone bankrupt with all of the mistakes they've made,'' Rogers said. ``What's going to happen when you Band-Aid and put some Band-Aids on it for another year or two or three? What's going to happen three years from now when the situation's much, much, much worse?''

...Rogers said he had not covered his so-called short positions in Fannie Mae and would increase his bet if it were to rally. Short sellers borrow stock and then sell it in an effort to profit by repurchasing the securities later at a lower price and returning them to the holder.

The U.S. economy is in a recession, possibly the worst since World War II, Rogers said.

``They're ruining what has been one of the greatest economies in the world,'' Rogers said. Bernanke and Paulson ``are bailing out their friends on Wall Street but there are 300 million Americans that are going to have to pay for this.''