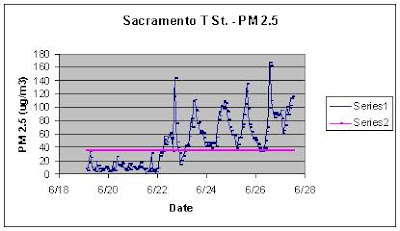 A Week Of Nuclear Winter....

The orange tint everywhere during the daytime is disconcerting, but not wholly unwelcome (orange is my favorite color).

Most of the smoke is trapped in a haze layer above our heads. Notice how PM2.5 concentrations (the lung-damaging kinds of particles) reach their maxima at ground level during mid-afternoon in midtown Sacramento. That's because, as the mixing depth grows throughout the day (starting from near-zero at sunrise to more than a 1000 meters by midday) it snags some of that smoke and fumigates it downwards to the ground. At sunset, mixing depth reduces in size once again, and the fumigation process stops. Smoke deposits to the ground and other surfaces during the night, and steadily diminishes in concentration, but gets replenished again the next day from the haze layer aloft.

Life in the Sacramento Valley is steadily dropping in quality: