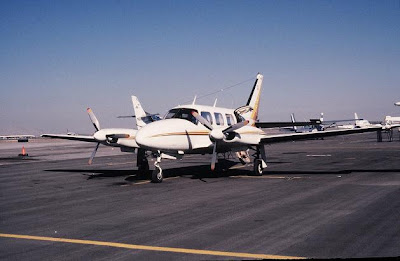 The original plan was that we'd quickly develop a way of dangling a hose from the plane in order to disperse the liquid CO2 into the fog from above, so we need not fly through the fog itself. This was important, because, if we were going to make a grand demonstration of clearing the fog from the entire Salt Lake City metropolitan area in just a couple of hours, it would be nice if we could actually see where we were going as we flew along.

But then it occurred to us that the Federal Aviation Administration (FAA) might want a say regarding things hanging from aircraft. It was safer to dangle a hose than to fly through the fog, but if the hose couldn't quickly break away, then it might tangle on power lines or other tall objects that might litter the Salt Lake City area, and pull the plane down too.

Regarding breakaway hoses, apparently the FAA wanted a lot more time and engineering support than a few hurried and ambitious university people could provide. So, Plan B was to spray the liquid CO2 directly from the plane, and fly just under fog top as we dispersed the material. 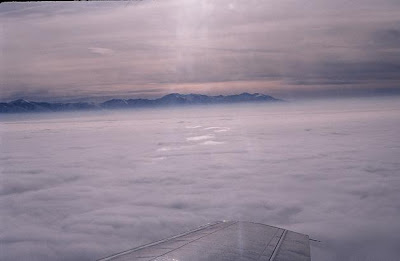 Left: 1108 MST, 12/27/89. Sundogs, as seen from the north end of Leg 4. Fog penetration east of Stansbury Island, north of Toole, UT, and flying directly over the Great Salt Lake.

We flew through the Toole Valley, west of Salt Lake City, dispersing liquid CO2 along the way. As the fog iced up, the fog top collapsed, creating a canyon in the fog. Sundogs (bright patches) could be seen at fog top, announcing the presence of ice crystals. 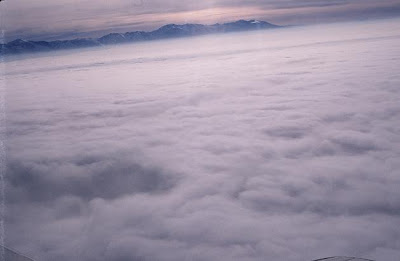 Nevertheless, at least on this day, the valley fog reasserted itself and soon healed the canyon created by the fog seeding.

My speculation was that the substrate below the fog might be important for fog control. Mobile seeding at Vernal seemed to be a success, because we were working, in part, at the edge of the fog, on a warming land surface. In the Toole Valley, however, much of the seeding occurred over a water surface, less prone to warming in the sunlight, thus giving the fog time to regenerate.
Posted by Marc at 6:52 PM