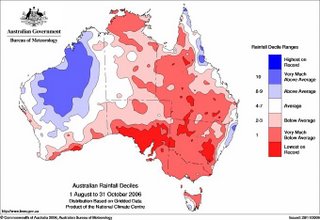 Report On The Australian Drought

Here is a recent governmental report regarding the unprecedented drought affecting Australia. The figure to the right helps express the terrible nature of the drought. The new hyperaridity of Interior Queensland contributed to my unease while travelling there recently. I just hope that the climatologists will screw up with their forecasts and that things will improve over the next few months.

Much of southern Australia and coastal Queensland has experienced a protracted downturn in annual rainfall which has intensified since the 2002 El Niño event and has most severely affected the eastern states and the southwest corner of Western Australia.

Some areas of central Victoria, southern New South Wales and south east Queensland have had continuous lowest on record or very much below average rainfall since 1997.

A sequence of seven failed autumn breaks in the Murray-Darling Basin has not previously occurred in the records. Chances of a break in the current Autumn are fast receding. There is no sign that the months up to December 2006 will lead to any major relieving rainfalls, with rainfall in the southeast and even the summer rainfall in north-eastern Australia likely to be below average.

Indeed, the presence of a developing El Niño event suggests that it is very unlikely that Australia will see extensive drought breaking rain before the autumn of next year.

Major urban water storages are low and well below average for this time of the year across the south eastern part of Australia and south eastern Queensland. Storages for virtually all the major urban centres of Australia are being progressively drawn down, with no signifi cant inflows for a number of years.

Tough water restrictions, which include complete bans on the outdoor use of water, are already in place in Goulburn, Gosford, Bendigo and Toowoomba. More cities, such as Brisbane, Gosford and Ballarat, are likely to follow in the immediate future. Sydney has had a ban on sprinklers for three years. Significant water conservation measures are already in place and contingency measures for augmenting water supplies in the face of a deteriorating situation are also well in train.

In rural areas, inflows to dams in the Murray-Darling Basin System over the past five years have been the lowest on record. Consequently, irrigation allocations are significantly below entitlement.

Storages such as in the Wimmera Mallee in central Victoria have received no substantial inflow for six years.

The impact on individual farm incomes will vary depending on the way irrigators respond to low water allocations. The ability to trade water under the NWI will assist farmers adapt to the shortfalls.