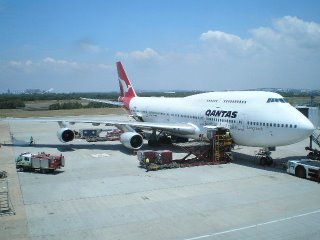 December 3rd began with the harrowing forest walk at Mt. Glorious, then the surprisingly trouble-free drive to the airport, then airport security, then the flight on the crowded Boeing 747-400 from Brisbane.

My mates on my row of seats were two pleasant women, representatives from SunSail yacht rentals. Based in northern Queensland's gorgeous Whitsunday Islands, they were headed to the British Virgin Islands, for serious work discussions with American compatriots. Such a life!

I watched three movies, but imperfectly, because of jet noise and entertainment center glitches: "Joyeaux Noel," "Little Miss Sunshine," and the recent Australian hit "Kenny." "Kenny" is one funny movie: an Australian foreman of port-a-loo installations talks about his life and work, and even finds romance, when he travels to attend a portable toilet convention in Nashville, Tennessee, USA. My mates found "Kenny" uproariously funny, and I must agree with them.

Crossing the International Date Line, we caught the last few hours of Western Hemisphere December 2nd, but then December 3rd started all over again. We landed at LAX about 7:30 a.m. (after an abortive landing, however, because we got too close to another aircraft on the ground and had to circle back again).

After returning via Southwest Airlines to Sacramento shortly after noon, I took a much-needed nap (two nights in a row without sleep is tough), before heading to Davis, to catch the DMTC folks after "Oliver!" strike, and to pick Sparky up from Steve and Jan. Sparky had gotten along famously with Mrs. Lovett and Scruffy, but had repeatedly peed all through their house, so - it was time to leave!

December 3rd was the longest day ever! I thought it would never end!
Posted by Marc at 2:00 AM